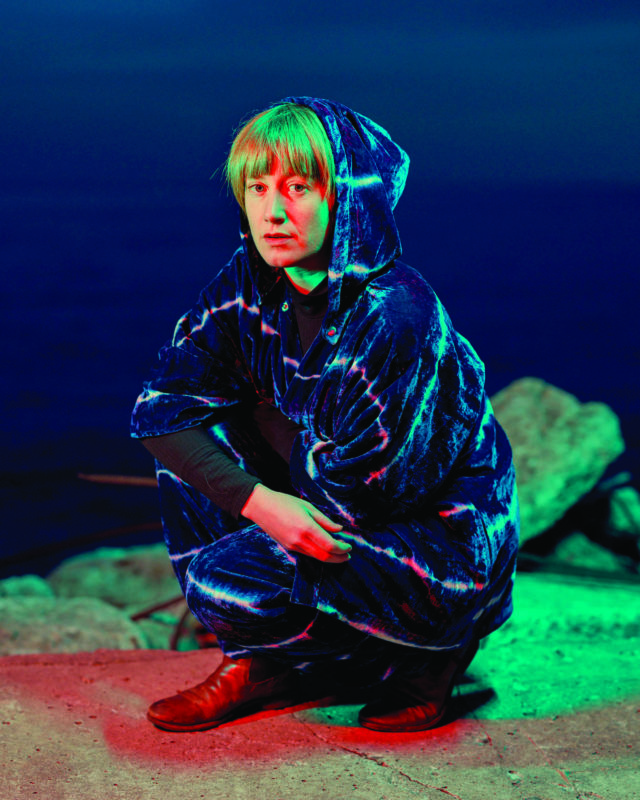 Tamara Lindeman wasn’t sure she wanted to share the songs that became her upcoming record, How Is It That I Should Look At The Stars.

“They were songs that I really felt like I was writing for myself,” says Lindeman, who records under the moniker The Weather Station. “And the same with recording [the songs]: I just felt like it was something I was doing for me. They feel almost too earnest, like, there’s no wall there in these songs. They’re very internal. They sound almost like they’re from a child-self. They’re very naive.”

“The year was unrelenting / We argued all the time,” she sings softly on opening track “Marsh,” accompanied only by gently pulsing piano chords. “I obliterate your positions, and you know just how to obliterate mine / Online, we talk, or say we talk, mute and block / I should turn this thing off, I know I should give it up.”

Lindeman sings of walking off anger, down the road—presumably in her hometown of Toronto—to a marshy spot full of bulrushes and water striders, where she tries to center herself by focusing on the details of the scene before her, “to really see the beauty, the blue and green, and light green, and yellow green, and blue green, and gray green and muddy green.”

But all she can see is black, “like the new moon sky.” And she cries.

“When they hold the election, this argument may end,” she sings, “But everything depends on it still / If we don’t argue they will / I can’t even watch the starlings fly when I know I can’t count even on this / Tangle of grasses.”

If this is “naive,” as Lindeman says, it’s a relatable innocence; a sense of impending doom, the creep of conservative, anti-intellectualism across the globe threatening everything—including the earth itself.

She pulls this thread all the way through How Is It, pointing out the arrogance, greed and racism that have led the world to this place: staring down the barrel of climate change, threatening to build walls, devoid of compassion, yearning to keep our heads buried in the sand for a bit longer.

“We could walk out on the street and buy roses from Spain / Lemons and persimmons in December rain,” she sings in the lead single, “Endless Time.” “ All of our lives it had been that way / But it’s only the end of an endless time.”

Lindeman considers How Is It a companion piece to last year’s critically acclaimed Ignorance. But unlike the glossy pop of Ignorance, Lindeman opts for a rawer feel for How Is It. There is no percussion, only the drive of Lindeman’s piano, embellished modestly by woodwinds, guitar, a touch of bass, and Lindeman’s grounding alto.

“I’m aware that it’s not the coolest record in the world,” Lindeman self-deprecates. “It’s not going to be a commercial sensation. So I was sensitive to that.”

But in a way, How Is It is a return to form for Lindeman, whose body of work mostly leans into the unadorned aesthetic of acoustic folk. Ignorance was a challenge to herself to break free from her notions of how her music should sound.

“I had a fear, before Ignorance, that comes from the folk world, I guess, of being too polished—a fear of hi-fi,” Lindeman says. “It has got to be a little bit gritty to be real, you know? But that’s ridiculous. I love lush, perfectly produced albums, you know, so why would I hold myself back when I have the budget to go to a studio and make a record like that? It was a matter of embracing the idea of music that anyone could hear and enjoy. I don’t have to close myself in by some aesthetic idea that is limiting.”

She had gone into a songwriting frenzy of sorts in the winter of 2020, producing a number of songs that simply didn’t fit the style she was envisioning for Ignorance. She set aside these softer, diaristic songs.

“After I finished Ignorance—the record that I tended to create—I just found myself feeling sentimental about these other songs and not wanting them to be forgotten, you know? Because sometimes you forget your own songs.”

How Is It was ultimately recorded on Lindeman’s dime, without informing her record company. She gathered her bandmates in a studio in Toronto and recorded the album live off the floor, each take a complete performance, a situation that required “total focus,” Lindeman says.

As it is with all Lindeman’s songwriting, How It Is captures macro shots of moments and emotions, zoomed into the granular detail of one person’s experience of a universal problem. The result is intimate, immediate, and ethereal.

“I think a lot of my songs have to do with peeling away denial,” she says. “There’s a lot of cognitive dissonance in them … pieces of things I was really reckoning with, [like] being the wrongdoer. There’s a way in which I think that people are afraid to face colonialism and climate [change] because they don’t want to be the bad guy, and I think that my songs are often kind of reckoning with that, and in a way that I think is not negative to just be like, ‘Oh, I’m ignorant. I didn’t know. I’m the bad guy. Now what’s next?’ You know, moving past the guilt and denial.”

But even the most dedicated and enlightened find themselves exhausted in the fight for equality, including Lindeman.

“I am lazy / I only want to talk about love,” she sings in “To Talk About.” “Sometimes it feels like the only thing anybody wants me to speak of / Nobody wants to drag themselves through the endless ruins of all there is in this world that is not love.”