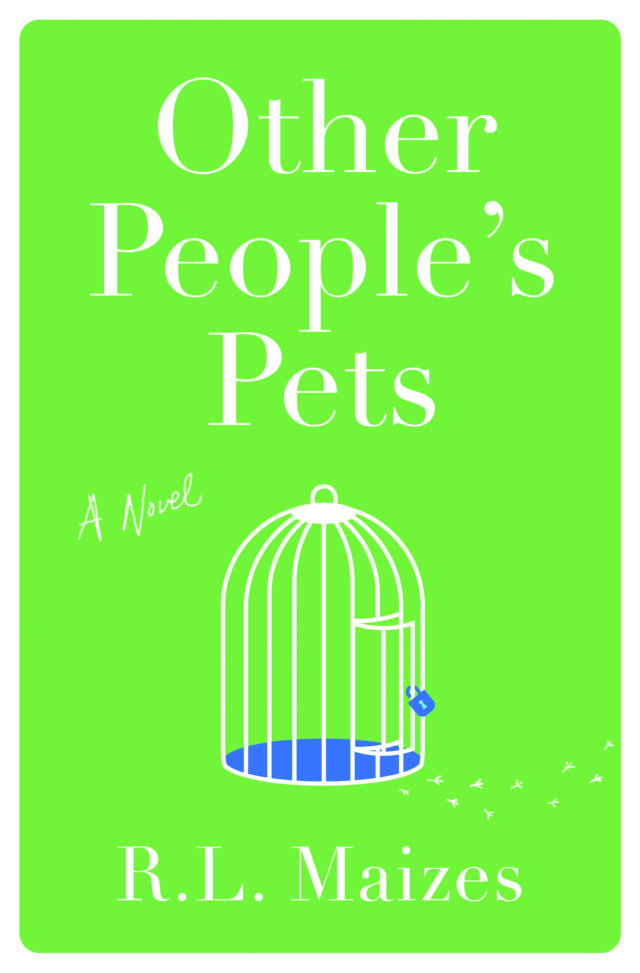 “I think in pictures,” she told Stanford’s School of Medicine in 2014. “Since animals do not have language, their memories have to be sensory-based instead of word-based.”

Grandin tunes into the way animals move, to their body posture. It can seem as though Grandin can communicate with animals in an almost telepathic way.

Local author R.L. Maizes has often found herself wondering what life would be like for someone who really could feel what animals feel, not just in the way that Grandin is keyed into animal behavior, but a real super power that allowed a human to physically experience what an animal does: the ache of hunger, the throbbing of arthritis, the disorientation caused by a tumor pressing against the spinal cord.

“What kind of decisions would that person make,” Maizes says during a recent phone call, “and how could she stand moving through the world?”

In Maizes’ debut novel, Other People’s Pets (out July 14 from Celadon Books), Louise “La La” Fine discovers she’s an animal empath — she can physically feel what animals are feeling — after her mother, Elissa, abandons her and her father. A locksmith-turned-theif, her father, Zev, is a devoted but misguided parent who homeschools his daughter so she can join him in a life of daytime home burglaries and backroom-fence-operation haggling.

As an adult, La La has divorced herself from her adolescent life of crime and almost made it through veterinary school when her father gets arrested… for burglary, of course, but unforeseen circumstances raise the stakes substantially for Zev. Faced with losing the man who raised her — the parent who didn’t abandon her — La La has to figure out how to make enough money to pay for her father’s lawyer, and the only option she sees is to go back to robbing rich households of their jewelry and silverware. She justifies her return to crime by only targeting homes where she can feel an animal in distress. Armed only with her veterinary bag — never a weapon — she helps the animal before she flees the scene.

Other People’s Pets is a clear evolution from Maizes’ debut collection of short stories, We Love Anderson Cooper, again using magical realism to explore the complex nuances of human emotion and interpersonal connection. In We Love Anderson Cooper, cats become proxies for our anxieties about alienation, birds symbolize the love we want from our mothers and dogs remind us of how we’ve gone astray.

Similarly, in Other People’s Pets, La La’s ability to experience what animals feel is a substitute for her inability to intuit human behavior: why her mother left, why her father won’t allow her to have normal childhood experiences, why her fiancé can’t understand why she must return to crime to save her father. While La La struggles to cope with her own trauma around abandonment, she easily understands the trauma animals endure when they are abandoned.

Maizes creates a novel full of anti-heroes shaped by trauma: We can root for La La and Zev despite their flaws because we understand the source of their pain, the abandonment that left them searching desperately for something to fill the void. Even Elissa, the mother who abandoned her child, feels relatable when we consider the pressure Zev — and society — put on her to have a child when she never wanted to be a mother in the first place.

“I don’t think any of us get away without suffering,” Maizes says. “So one of the questions the book poses is how do we move past that? How do we move past our childhood trauma or our childhood suffering? Are we stuck in it? Is it determinative of everything we’re going to do as an adult? Does it create barriers that we’re not going to be able to overcome, or are there ways for us to open up as adults and to heal and move forward?”

Other People’s Pets uses humor, pathos and just a touch of magic to unpack the meaning of family — the family we’re born with and the family we create. It explores the coping mechanisms we develop to move forward and asks us to recognize that holding on to the past — even when it’s rooted in love — robs us of our future. Each time La La robs a home, she robs herself — of stability, of better opportunities. But with every burglary La La executes, you may find yourself wondering how different your own coping mechanisms are; are your own emotional crimes really victimless? What are you robbing yourself of each time you turn the television on instead of talking to your partner after a fight, or when you have another drink to dull the reality of life, or when you lash out because you’re feeling insecure?

Maizes offers a chance for readers to see themselves as anti-heroes, as imperfect characters with traumas and bad coping skills, but not as villains incapable of redemption. We all have super powers, it’s just a matter of learning to use them.

‘The Year of Yes,’ by Shonda Rhimes

As a self-described introvert, Maizes says this book was essential reading before she embarked on the media circuit for Other People’s Pets. In The Year of Yes, Shonda Rhimes — creator of Grey’s Anatomy and Scandal — opens up about her struggles with anxiety and fear, despite her massive success. When her sister called her out for saying no to practically everything, Rhimes realized she had to make a change in her life. For one year Rhimes said yes to everything that scared her. This book is a poignant, hilarious memoir about how saying yes opened Rhimes’ life up in ways she never could have imagined, and how saying yes could open your life up as well.

It’s easy to see why Maizes finds this novel endearing: The main character takes to wearing her small dog in a BabyBjörn as her marriage crumbles, her career nosedives and her teenage son drifts further away. Separation Anxiety uses humor and compassion to explore the ebb and flow of our closest relationships, and the insecurities and fears that keep most of us from achieving our dreams.

‘You’re Not Listening: What You’re Missing and Why It Matters,’ by Kate Murphy

You’ve got two ears and one mouth for a reason, they say: Listen more, talk less. But we could all use a little help being better listeners, which includes knowing how to ask the right questions. Kate Murphy outlines how to ask questions of the important people in your life that actually help you know them better. Maizes says the book has helped her think differently about how she talks to everyone in her life, from her family to her professional relationships.

‘The Woman Next Door,’ by Yewande Omotoso

A story about the years-long feud between two neighbours, Marion and Hortensia, living in post-apartheid South Africa. Much like Other People’s Pets, The Woman Next Door connects the reader to the two main characters by detailing their backgrounds, allowing you to see how they came to believe the things they believe. After an unforeseen event forces these two polar opposite women together — one black and acerbic, the other white and racist — Omotoso picks apart the nonsensical notions that drive racism and classism.

When young Edward is the sole survivor of a plane crash, he’s forced to move through the world alone with a trauma few have experienced. Part drama, part mystery, Dear Edward asks a question that’s similar to the central premise of Other People’s Pets: When you’ve lost everything, how do you move forward?