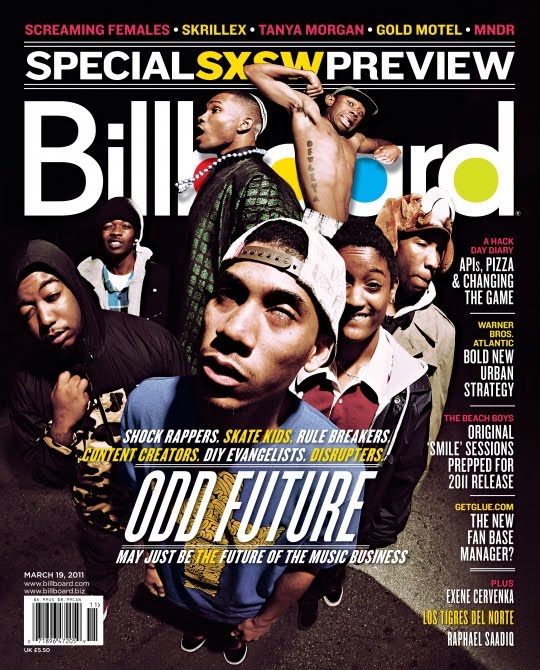 Conservative pundits would have had bona fide
controversial rappers to rail against instead of Common, the
nonthreatening Chicago rhymer who appeared at last week’s White House
poetry slam.

In a way, it’s appropriate that Bill O’Reilly and
crew had to overreach to tar a kinder-and-gentler rapper like Common as a
would-be gangsta. Hip-hop and controversy just don’t go together the
way they once did. Oh, for those pre-9/11 days when the Western world
had nothing worse to worry about than a sociopath named Eminem.

Since then, hip-hop’s share of the slumping recording
industry has shrunk, even as majordomos such as Jay-Z and Kanye West
have become ubiquitous. The music is overdue for a shake-up from the
underground.

In other words, it’s been waiting for just the
injection of anger, nihilism, and chaos — brought to your laptop and
smartphone with marketing savvy — delivered by Odd Future, with the
release of “Goblin” (XL, 2 1/2 stars) by Tyler, the Creator, the first
album from the collective to come out on a proper record label.

And while the album by Tyler, a better than average
rapper and impressively skilled producer, may not yet have answered the
question posed by a Billboard cover story this year — “Is This the Odd
Future of the Music Business?” — it entered that magazine’s album charts
this week at No. 5.

Tyler, 20, who sends out Twitter messages dozens of
times a day, tweeted with astonishment: “50k People Paid Money To Listen
To Me Bitch About Life And Talk Immature S- Over Repetitive Beats …”

He followed that up minutes later on a more
vulnerable note: “It’s So Many People Hating Right Now. Just Be Happy
For the Kid For A Second . …”

It was typical move for Tyler, an intentionally
confounding character whose arresting single “Yonkers” opens with the
pronouncement: “I’m a paradox — no I’m not.” His debut is structured as
an album-length, hour-plus therapy session, with the rapper voicing both
patient and therapist.

Since 2008, Odd Future — that’s the short version of
Odd Future Wolf Gang Kill Them All — has been unleashing a torrent of
digital content on the Web. Standouts among the music-and-skateboarding
crew’s group and solo efforts include “Bastard,” the 2009 debut by Tyler
(last name: Okonma), and Earl, by the gifted, now 17-year-old rapper
Earl Sweatshirt. His mysterious absence from the group in recent months
is in large part the focus of a superb 8,000-word profile of Odd Future
by Kelefa Sanneh in this week’s New Yorker.

“Goblin” represents the peak (so far) of swelling
interest in Odd Future, which Sean “Diddy” Combs called “the future of
hip-hop” in March at the South by Southwest Music Festival. The album is
loaded with unforgivably violent language directed at women and gays,
including rape fantasies, that succeed in the aim to infuriate. It’s
about depression, suicide, and murder, mixed with complaints about how
Tyler doesn’t care for his grandmother’s collard greens and would much
rather be eating Hot Pockets.

It’s occasionally interspersed with moments of near
tenderness, as in “She” and “Her.” At one point, the gravelly voiced
rapper rhymes: “F- the fame and all the hype, G / I just want to know if
my father would ever like me.” While there are no concessions to pop,
the album demonstrates its creator’s surprisingly subtle beats, gleaned
in part from obsessively listening to the hip-hop/R&B production
team the Neptunes. He also cites Erykah Badu and Marvin Gaye as
influences.

“Look Past The Lyrics, Most Of My Beats Are Really Pretty And Chill,” Tyler tweeted this week.

That’s easier said than done. And it’s one reason why
the delicately entrancing instrumental “Au79,” which has none, may be
the most enjoyable track.

But over the course of “Goblin’s” hour-long length,
the violent language gets to be too grueling to bear. It’s particularly
true on the eight-minute posse cut “Window.” And the “Radicals” chant
that starts with “Kill people!” is a painfully hackneyed attempt at
provocation.

Despite “Goblin’s” noxious content, both Tyler
individually and Odd Future as a whole have largely been greeted as
critical darlings, or at least as a current crush object of a
media-industrial complex looking for new generation of rule breakers.
(Comparisons abound between Odd Future and artistic stasis in hip-hop
and Nirvana’s upending the calcified rock world in the early ’90s.)

What to make of Odd Future is a question of
contentious debate. Sara Quin of the punk-folk duo Tegan & Sara
wrote of Tyler this week on their website: “When will misogynistic and
homophobic ranting and raving result in meaningful repercussions in the
entertainment industry?” Tyler, naturally, responded flippantly,
suggesting that he was sexually available to Quin and her sister (both
lesbians) if they were interested.

That front of profane ridicule might suggest it’s all
a laugh in the Odd Future camp, where the world would be a less
stressful place if all the haters would just chill. Elsewhere, though,
Tyler can’t help but reveal that the spotlight is already wearing on
him. “Remember When Odd Future Was Just A Group Of Kids Skating And
Making Music And Doing Funny S-,” he tweeted Tuesday. “Yeah, I don’t
either.”