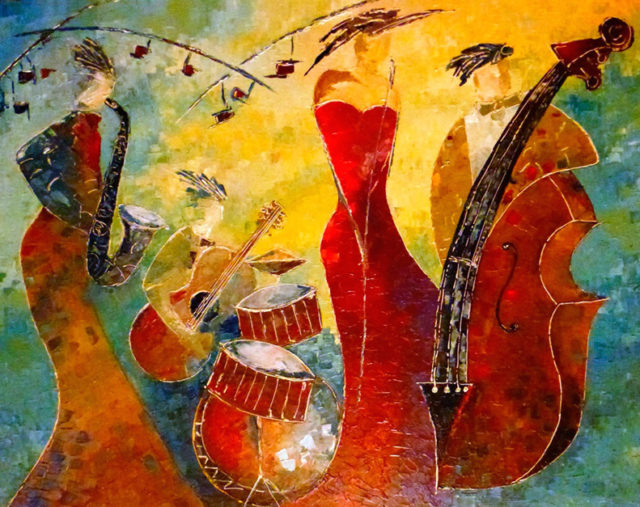 MaryLynn Gillaspie and her sister Gaile had just settled into a hotel room in Tokyo when their tourmate Dizzie Gillespie called. Gaile answered the phone.

“Don’t you know how to spell?” Dizzie teased about their almost-identical last names.

It was a high time for the Gillaspie sisters. Just a few years earlier they were waiting tables in Boulder, Gaile singing in local clubs. But when they met fellow jazz crooner Marguerite Juenemann, things started to change. They formed the jazz vocal group Rare Silk, which, by the end of the 1980s, had racked up two Grammy nominations, gigs at Carnegie Hall, the Hollywood Bowl and the aforementioned trip to Japan to perform alongside Benny Goodman at the Aurex Jazz Festival.

“We were on a plane flying to Japan with the greats,” MaryLynn Gillaspie says. “Freddie Hubbard, Dizzy Gillespie, Alphonso Johnson, The Brecker Brothers.” Gillaspie is humble about her place in contemporary jazz history, but she sits among an illustrious group of women who carved out space in a male-dominated genre — among women who are still carving out space right here in Colorado.

Gillaspie and fellow jazz connoisseur Suter Dubose decided it was time for a celebration.

The two-day Celebration of Colorado’s Women of Jazz event at Caffe Sole on Nov. 3 and 4 will act as a mini festival of sorts, featuring nearly 25 of Colorado’s best female jazz musicians, including vocalists, horn, bass, drum and wind instrumentalists.

“The idea arose in my mind about three or four months ago, partly because of the backlash of Nov. 8,” says Dubose, himself a former professional musician and current owner of Caffe Sole, one of Boulder’s hot spots for live jazz. It’s no surprise Dubose felt called to celebrate women of jazz — he was raised with strong feminist values. His mother conducted some of the first research on recidivism for female prisoners in 1977 and she founded Texas’ first chapter of the National Organization for Women.

“I think it’s time to celebrate the women of jazz because of the talent but also because it’s an important theme politically, the uneven playing field women face in the world,” Dubose says.

Women have been a part of the evolution of jazz since its inception in New Orleans in the late 19th century, but their stories are less told, their accomplishments less lauded, particularly those of female instrumentalists.

“There are a lot of women in jazz that are singers, but instrumentalists indeed there aren’t,” says composer and pianist Carmen Sandim, who will take part in the first night of the Colorado Women in Jazz celebration.

Female jazz instrumentalists, mostly pianists, can be traced back to the early 1920s, but at the time it simply wasn’t culturally acceptable for a woman to enter the world of jazz, a field typified by late nights in dark, boozy clubs.

Sure, that’s changed, Sandim says, but the way society speaks to girls, the messages they’re fed from a young age, still leads to a male-dominated world of music.

Sandim points to a 2012 interview with big band leader and composer Maria Schneider.

“What goes into children’s brains when they’re young … gives them an indication of themselves,” Schneider says in the videotaped interview for Big Think. “For instance, if you see a little girl … you’re more likely to say something like, ‘Oh, Suzy, what a beautiful little dress you have and I love your hair and you got your ears pieced!’ All the things that she’s getting attention for are about how people perceive her from the outside in. What do we say to a little boy? We certainly don’t say very often, ‘What a cute little outfit you have on; I love your boots!’ You’d say, ‘What are you making, a train set? And you built that!’ So what he feels he’s getting attention for, adoration for, is what he’s creating, what he’s making.

I think for young girls growing up they get very confused. Because every human has this impulse to create, but [it’s harder] to have the energy to develop those skills and to be by yourself and spend an intense amount of hours working on your craft, and at the same time being concerned constantly about how people are perceiving you and how you’re not going to be loved unless you’re considered to be beautiful — like me coming to this interview [worrying] that it was a video. We women get completely distracted by that stuff. And I think that thing keeps a lot of women from doing what they would need to do to develop themselves as a jazz musician. It takes a lot of lonely hours to do it.”

But even for those women who do push through society’s subliminal dismissal of female intelligence and talent to become jazz musicians, there are still battles to be waged against sexism.

“I play some gigs here in town that the owners come to me and say inappropriate things,” Sandim says. “‘How appropriate that you’re hot and you play. I think it’s great that you put yourself together for this gig.’ I don’t think I’m being hired for that, but I wonder if they even hear me play. How many people are looking at us as an oddity?”

But it’s better than it used to be, Sandim says, and events like the Colorado Women in Jazz Celebration help to improve the situation even more.

“Maybe a way through this is [women] doing more things together,” she says. “I think that strengthening our own commitment to playing with each other helps us overall.”

Colorado has a rich history of women in jazz coming together to create their own place in the genre. Back in the 1940s, 16-year-old trumpet player and South High School student Joy Cayler formed an all-girl band that played for GIs and civilians throughout the country and abroad during World War II.

It’s those precious nuggets of history that the Colorado Women of Jazz celebration is meant to salute. While there’s no denying the politics, the focus is on the music.

“Maybe celebration is a form of political activism,” she says. “In times of great difficulty, people find ways to celebrate, and music was always a big piece of that. Always.”