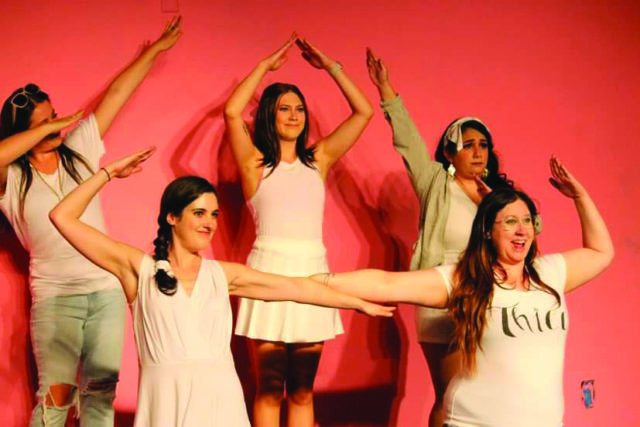 After more than 22 years of producing shows in Longmont, Jesters Dinner Theatre will close at the end of May, according to emails from the Jesters box office.

“It’s been an amazing 22+ years,” reads a March 7 email from Jesters box office, “lots of ups and downs, and, frankly, business has been great (except for the pandemic closure) for the past six or seven years. We know that the theatre has become a ‘home,’ to many, especially youth.”

Jesters actor Amber Sutherland wants to save the dinner theater.

Sutherland, who’s worked at Jesters for the last year, launched a GoFundMe campaign on March 7 with the goal of raising $1 million—only half the estimated cost of the building at 224 Main Street, according to Sutherland.

“This is happening very fast,” Sutherland says. “The time crunch is the biggest piece—it’s already set up to go out on the market on April 4.”

With the voraciousness of the Front Range realty market, Sutherland says she believes that if the building goes on the market, it will be purchased quickly, then razed.

After more than a decade of staging Jesters Theatre productions out of different locations around Longmont, including Dickens Opera House, Scott and Mary Lou Moore bought the 9,100 square-foot property on Main Street in 1998 and opened the dinner theater on July 24, 1999 with a production of Oklahoma!.

“There are adults that have been there since this place started, and they started in children’s programs,” Sutherland says. “I’ve been involved in a lot of different community theaters, and they all offer wonderful pieces. But [Jesters] has offered a family to these kids and these adults more than I have ever experienced in my life. It’s emotional—it’s incredibly special. And there are performers who were there for the first production of Oklahoma! who are still performing there today.”

“I know that from a time standpoint, my investment in Jesters seems small, especially compared to the people who have been there for all 23 years,” Sutherland says. “But I have been in theater my entire life. … I grew up doing theater, directing, running kids theaters, sound, lights, sets, everything you can imagine I am. I have worked in the entertainment acting industry, not only in theater, but doing film, TV and improv. I just have a dying love for this industry and to see this place disappear just breaks my heart, and I’m willing to do anything and everything it takes to keep it alive.”

To learn more about Sutherland’s campaign to buy Jesters Dinner Theatre, visit the Facebook group Save the Jesters, or donate at: bit.ly/3pQjLNc