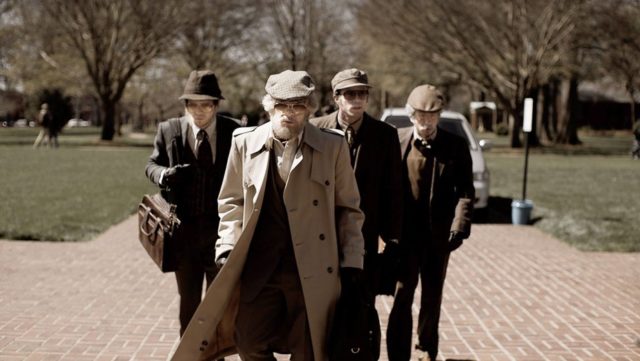 This is not based on a true story; this is a true story.” So proclaims the title cards that open American Animals — a documentary/narrative hybrid that is almost too good to be true. And it is true, but in a circuitous manner. Truth is a fickle thing: look straight at it, and you’ll miss it every time. Take another glance from a cockeyed angle, and the world will reveal itself to you.

Written and directed by British filmmaker Bart Layton, American Animals is a four-person memoir recounting the events leading up to one of the oddest and, frankly, stupidest heists in recent American history: the theft of three rare books from Lexington, Kentucky’s, Transylvania University in 2004.

Initially conceived by Spencer Reinhard, then a freshman at the nearby University of Kentucky, the plan was to steal the university’s copies of Darwin’s On the Origin of Species and Audubon’s Birds of America and sell them on the black market for millions. But how does one do that? Enter Warren Lipka, just the friend your mother always warned you about. Lipka excels at running with bad ideas, and after some cursory research from movies and a few disreputable websites, he sets the plan in motion. Lipka finds a guy who knows a guy who can fence the books, tracks down an auction house in New York that will authenticate the books and enlists the help of two more people — Eric Borsuk as lookout and Chas Allen as getaway driver. All four are young, dumb and full of you-know-what and looking for an experience to validate their existence. They are not robbers, but they play them in their minds.

But Layton does not merely recreate all this for the camera. Well, he does — Barry Keoghan, Evan Peters, Jared Abrahamson and Blake Jenner play the four-wannabe thieves — but he also incorporates the reflections of Reinhard, Lipka, Borsuk and Allen in modern-day interviews. Now in their 30s, these men talk openly and candidly to Layton’s camera. Their main interest is in conveying the societal pressures that surrounded them. School, sports, the need to be someone and do something ultimately shaped their decision to go through with the heist. But that’s not what interests Layton. The way he cuts back and forth between these contemporary interviews and the re-enactments suggests that memory is his ultimate aim.

“Looking back on it,” Reinhard confesses to the camera, “I’ve often wondered which events I remember from Warren’s point of view or I remember from my own. And if it was easier to choose one over the other because of what it provided for us.”

Cinema is not a memory fundamentalist medium. By their very nature, movies converge multiple points of view, rationales and interpretations into a larger, broader narrative. Everything you see in American Animals is true, to at least one person involved. And when the movie doubles back in the third act, reconsidering moments we barely even questioned the first time around, it hits you: Even the viewer is culpable in how a story is told and then re-told. It’s all true, even the parts we made up.