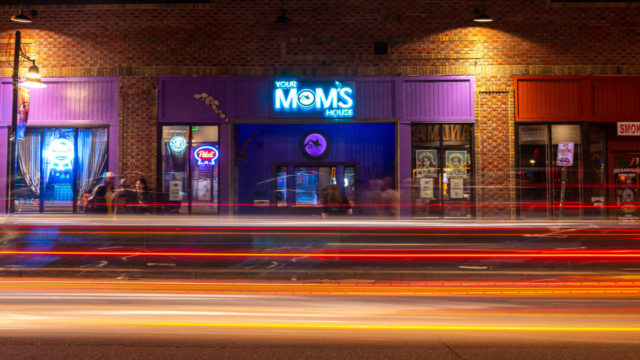 James Bedwell’s come a long way since his days booking shows in the second-floor lounge of a pizza joint on 17th and Clarkson in Denver.

It’s a proud moment for a man who, just a few years prior, saw opportunity in the most unconventional of spaces.

“A roommate who I had found off Craigslist worked as a bartender at Tony P’s Pizzeria,” Bedwell explains. “It was near our [home]. He had me come by one day to check out the spot, and I was fascinated by the upstairs area. I instantly envisioned what it could be as a venue. I pitched my idea to [Tony], and after a few successful shows, I was booking events Wednesday through Saturday.”

Bedwell continued this venture for two-and-a-half years, using his newfound foot in the door as a means of networking local acts.

“It became a place for lots of new artists to get the ball rolling,” Bedwell explains, “like really their first opportunity to invite their friends and play in front of a crowd.”

From 10 p.m. to 2 a.m. four nights a week, crowds fueled by word-of-mouth and artist familiarity packed the French Quarter-style balcony above the pizza parlor’s Broadway-style sign. Directly below, to the sounds of vintage Italian crooning, Tony Pasquiani spun tomato pies for late-night orders. Before long, Bedwell was booking all over the Mile High City: monthly shows at Globe Hall, Walnut Room, Knew Conscious and more.

“All the while I was manifesting, telling friends my plan to open my own music venue. Just putting it out into the universe. I knew it would be a game changer,” Bedwell explains.

That game changed in fall of 2016, when he was informed by another bartender friend that her place of work, Pearl’s, was about to go under. Bedwell and his business partner, JoeDan Hite (known collectively as Boogie Groove Entertainment), made their pitch to the owner of Pearl’s and eventually made 608 E. 13th Avenue home.

“We actually didn’t become sole owners until a little later,” Bedwell explains. “The initial agreement was 70% us, 30% [Pearl’s]. When we decided on the name, at a Nuggets game of all places, we knew they’d hate it, and they did, so much so that after our six-month term, they backed out.”

On their own now, Bedwell and Hite pressed forward, and on January 27, 2017, they opened Your Mom’s House to the public.

But running a music venue is an unending grind. As though doing it on their own in a competitive landscape weren’t enough, the pandemic hit in year three. Choosing to see the glass half-full, Bedwell and Hite viewed it as an opportunity to completely renovate Your Mom’s House themselves.

“If we didn’t know how to do it, we’d research and get it done,” Bedwell says. “[Hite] is a do-it-all handyman. The shutdown was a chance to get ahead.

Perhaps no obstacle is greater for an upstart music venue than a radius clause: a non-compete clause used in the live music industry that contractually prohibits artists from performing at any venue inside of that promoter’s “radius.” Radius clauses typically prohibit an artist from playing a certain distance from the city in which they are scheduled to perform, or for a length of time before and/or after the performance. In Bedwell’s case, that means if artists choose to perform at Bluebird Theater, Mission Ballroom, Fiddler’s Green, The Gothic Theatre, 1st Bank Center, Globe Hall, Ogden Theater, The Fillmore, Marquis Theater, or Summit (some of the many Live Nation or AEG venues), Bedwell cannot legally book them for between three and six months. This presents an obvious challenge in securing acts. Often, Bedwell says, artists “choose another venue; booking with those large corporations provides an opportunity to climb a ladder from one venue to the next.” Still, Your Mom’s House offers an appealing location to incubate fresh talent.

“It’s just a perfect spot for new artists to do their thing,” Bedwell says. “The lights, the dance floor, the overall vibe—I can’t think of another 300-or-so capacity venue that allows for complete artist control. We let them bring in their own videographers and camera crew, and they can shoot wherever they want.”

All the imagery and footage captured at Your Mom’s House can be used by artists as promotional material to catch the attention of larger venues. Bedwell’s radius clause is no more than three weeks, and oftentimes, he explains, “voided early in the best interests of the artist.” It’s an opportunity for local talent to embed themselves in Denver’s tight-knit music community. That community, Bedwell explains, is what keeps his dream going.

“I remember in around 2005 when I was driving down from Fort Collins—my middle school and high school years—to see as many shows as I could, I saw it back then. I’m seeing it now. I know this city so well, and the music that exists in it. The responses I’ve gotten from out of state talent, in-state talent, and everything in between, reassures the huge support system we have in place as a music scene. It has a home at Your Mom’s House.”

Bedwell’s vision for Your Mom’s House was to create a venue for music lovers, by music lovers. Now, with five years at the helm of Your Mom’s House, his mindset hasn’t changed. He’s still booking shows for up-and-coming artists of any genre—many of which support a direct local charity or nightly in-house fundraiser. In the last two months alone, Bedwell has hosted a rap holiday show that doubled as a toy drive, a full-fledged clothing drive the night after, a music-driven benefit for the Marshall Fires on both January 15 and February 8 (with another coming up on February 23), and a concert alongside The Phoenix, a nonprofit that fights substance abuse. Bedwell orchestrates local acts alongside local causes, and it’s happening six days a week, with fundraisers taking place on a monthly basis.

“Supporting each other,” Bedwell says, “is the biggest achievement. I’m not really here as a competitor, I’m just here to help make magic.”