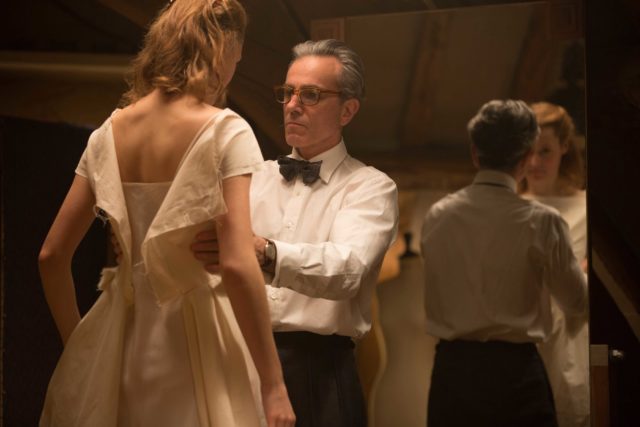 “Your wife’s got that gorgeous glow that comes with your first marriage,” a party guest quips to the oblivious husband. Yes, his face says silently, she does. But is that all? Probably not, this is Phantom Thread, after all. It’s the latest film from writer/director Paul Thomas Anderson, and, yes, it’s about love and marriage, but that quote should tip you off: this isn’t your ordinary spin around the old oak tree.

The wife is Alma (Vicky Krieps), a waitress from a remote country village, and the husband is Reynolds Woodcock (Daniel Day-Lewis reportedly in his final performance), an haute couture dressmaker living in post-war London, sometime between Powell & Pressburger’s The Small Back Room and Hitchcock’s Vertigo.

As a designer, Woodcock is ostentatious, designing dresses for royalty and socialites with magnificent flair. As a man, he is reserved and severe, living a life of austere rigor with the only woman he trusts, his sister, Cyril (Lesley Manville).

Into this life bounds Alma, whom Woodcock picks up because her figure is to his liking. At first, their relationship is between artist and muse, desirer and desired, but as time ticks on, who is which and which is who becomes more and more confused. Then the unthinkable happens, and with a most unexpected outcome. “Sometimes he needs to slow down,” Alma says with a sly grin.

Few filmmakers are as American as Paul Thomas Anderson. His two best — The Master and There Will Be Blood — practically scream Americana with every shot, every cut, every needle drop. Phantom Thread doesn’t. It’s a quieter film, one that screams little and ponders more — more about love and romance, partnerships and relationships, and, quite possibly, collaboration. At its core, filmmaking is a collaborative art, one that requires all parties to move and sway to the same beat. Should one disrupt that movement, the whole damn thing comes screeching to a halt.

Nothing and no one gets in Phantom Thread’s way. The performances are stellar, the camerawork magnificent, the mood remarkable and the music — composed by Jonny Greenwood and bolstered with some pieces from Debussy, Fauré and Schubert — is enchanting and almost constant.

Along with the camera, Woodcock moves to the music, music that drowns out all of life’s little annoyances. Alma hears the music too, moving in time with Woodcock’s unheard rhymes. But then, she doesn’t. She stops the music cold and replaces it with a knife scraping the burnt end off her toast, with loud slurps from her cereal and with dramatic pours from a water pitcher. What fun she derives, reminding him how in his world she is.

Yes, Phantom Thread is a romance and a complete one at that. It’s about marriage. It’s about the little things they do that irritate us, how they disrupt our routines and infuriate us, and how we simply cannot live without them. There is a moment in everyone’s “happily ever after” that involves riding hand-in-hand into the sunset. It also involves listening to them chew their toast. Love is both.