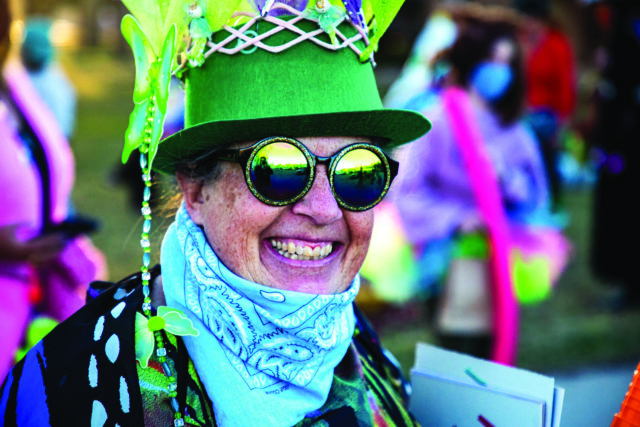 A break in Colorado’s early spring snows brought a warm, sunny day to Longmont last April. Outside the Senior Center in Roosevelt Park, locals festooned in strange and colorful costumes brandished pool noodles at each other and wandered through a “karma wash station” to pick up good vibes.

Before the sun set, a procession wandered past a couple retirement communities and along Main Street, back toward the park. Onlookers’ grins were all the reward the merry troupe needed for that first Absolutely Absurd April Fool’s Parade put on by the Left Hand Artist Group, or LHAG.

Founded in 2013 by Don Wilson, LHAG started as a group of friends getting together to share a few beers and talk art. Over the years the group has expanded to a couple hundred members, including artists, musicians, writers, poets and their supporters. Art from LHAG members can be found adorning the walls of breweries like Wibby, 300 Suns, Bootstrap and Grossen Bart, and of course Left Hand Brewing Company, as well as Longmont restaurants The Roost and Cheba Hut.

Anyone can join LHAG by showing up for a meeting, joining the Facebook group or visiting the newly-minted website, lefthandartistgroup.org. Meetings are typically held the first Sunday of the month, rotating between breweries. All mediums are welcome and liking beer isn’t a requirement for membership, just be prepared to introduce yourself to the group.

Wilson still helps out the organization as one of the volunteer curators, managing the art at Left Hand Brewing Company, but the founder has passed the reigns of leadership to an interim board of directors, who are putting in the work to make LHAG a place that supports artists and the community.

“As far as our place in the community, we start from the ground up,” board member Salowa Salzer says. “LHAG is a little wild. We do parades of lights and we’re the ones playing 500 different kinds of music. People are riding around on scooters in our April Fool’s Parade. And we represent the arts—not just visual arts. It’s about the synergy of all the arts played together.”

Each board member has their story of how they joined or bonded with the group. Amy Heneghan joined when she moved to Longmont, though her mother was already a part of the group, and found the wild creativity welcoming. Belinda Pelletier, a working artist, joined after hearing about the group from her son, and joked that she was only slightly disappointed it wasn’t a group for left-handed artists.

For Tony Kindelspire, a former journalist and editor for trade magazines, the experience was eye-opening. When he joined, the group was significantly smaller. At that first meeting, everyone went around the room to introduce themselves and talk about whatever art projects they were making—mosaics, oil paintings or other mediums—until it came around to him.

Kindelspire leaned on words because he wrote for the Times-Call, he explains, but he wrote prolific amounts of poetry in his younger days. Spending time in LHAG encouraged him to dig out his old poetry and start writing more, to the point where he’s self-published a few books of poetry. Since then he’s also taken up painting.

“I couldn’t draw a barn to save my life but I realized being in this group, you don’t need to be able to draw a barn. I had never been exposed to this amount of creativity,” Kindelspire says.

“It’s a strange thing to try and describe. There’s a great quality as far as the arts are concerned, but it’s welcoming to people who call themselves dabblers. Because they aren’t dabblers. It’s a journey out of dabbling and into the arts,” Salzer adds. “It blossoms out of that.”

Many LHAG members boast membership to more than one arts collective, including the Firehouse Art Center and Longmont Artist Guild, and LHAG often collaborates with other artistic organizations on events, like the Firehouse’s ArtWalk in the summer.

Like many nonprofits, LHAG struggled during the COVID-19 pandemic—meetings went digital as venues closed for in-person meetings, gathering masked and distanced outdoors when the weather allowed for it. In the past year, LHAG officially incorporated as a 501(c)3 nonprofit, opening up the potential for growth along with new fundraising opportunities.

“We haven’t really been able to fundraise for ourselves before, that’s sort of why we became a 501(c)3,” Andy Schwartz, LHAG’s treasurer, explains. “So we still want to do all these free events, I don’t think that will ever change, but now we can have these fundraising events that will let us give back to the community in other ways.”

The group is planning the return of its big creative event this year, the Label Show.

When Wilson was working at Left Hand Brewing Company several years ago, the brewery had an excess of labels from discontinued beer gathering dust. The brewery donated the labels to the group, which were distributed among members to create art. Since then, the Label Show has become LHAG’s biggest fundraiser, racking up donations in the thousands each  year.

Creations for the show aren’t restricted to labels from Left Hand Brewing, or even strictly labels. Past years have seen creative works built around stenciled brewery logos, worked into textile for fashion shows, even a full-sized suit of armor made from beer cans. The only requirement is that at least half the proceeds from each sale are donated to LHAG.

This year’s Label Show is being planned for June, the first since 2019, though a venue hasn’t been set. Still, one can expect live bands, local food and plenty of beer once they lock in the date.
Before then, LHAG will see the return of the Absolutely Absurd April Fool’s Day Parade. Once again on April 1, starting at the Senior Center in Roosevelt Park at 5:47 p.m. The gathering is open to anyone that wants to join.

During the first parade in 2021, with COVID-19 restrictions still firmly in place in Boulder County, Heneghan and the board weren’t sure what the turnout would be. One couple showed up in what looked like homemade dinosaur costumes after seeing the event posted on community social media app NextDoor, she says, and were pleasantly surprised that it wasn’t an April Fool’s prank. All told, around 60 people showed up.

“We learned that people needed permission to smile and laugh in a time in our world that’s been really challenging,” Heneghan says. “ It was like magic last year.”