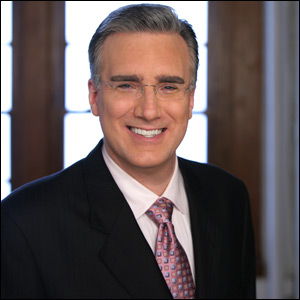 Olbermann, who will have an as-yet untitled nightly
program on Current and also become chief news officer and take an
equity stake in the network, said in a teleconference that he was
looking forward to a platform offering “news produced independently of
corporate interference.”

Current, which is available in about 60 million U.S.
cable and satellite homes and has 15 million more subscribers
internationally, is a private company and does not report financial
results. But the 6-year-old network is supported by advertising and is
seeking broader support among cable carriers as well as a larger
audience. Perhaps not coincidentally, the network will offer its
“upfront” preview of programming to advertisers on Wednesday, with
Olbermann’s hiring expected to be central. “Advertisers have certainly
looked at Keith as advertiser-friendly,” Gore told reporters.

Olbermann and his new bosses offered few details
about the host’s new program, although the broadcaster hinted that it
would be similar to “Countdown,” the nightly opinion show that
showcased liberal opinion and newsmakers. “Countdown” was MSNBC’s
top-rated offering, but the host frequently clashed with management at
NBC Universal before he left abruptly last month. During the height of
the election season last year, Olbermann was briefly suspended for
making donations to Democratic candidates in violation of policy.

Olbermann said Tuesday that he did not “want to stay stationary in that sort of mainstream news environment.”

With Olbermann’s hiring, Current would seem to be
lurching into the cable news race where MSNBC and CNN have long run
behind Fox News Channel. Hyatt insisted the network would not consider
itself a player in cable news, even with its new talent on board, but
deferred details until the network’s upfront presentation.

That Gore — a lion of the Democratic Party who won
the Nobel Prize for his environmental work — has hired the leading
liberal broadcaster would seem to establish Current as a base for
left-leaning opinion. Gore said he considered himself a “recovering
politician” but that he found himself in “substantial agreement” with
Olbermann’s views.

Olbermann has said little about his falling-out with
MSNBC since he left the network. On Tuesday he promised he would have
more to say about that in the future, but that “this isn’t the time to
do it.” An MSNBC spokesman said the network would have no comment on
Olbermann’s new deal.

As for Current, its leaders are confident that the
Olbermann hiring will finally mark its entry into the big leagues of
cable TV.

As Gore told reporters: “We have more subscribers today than MSNBC had when began working for them” in 2003.