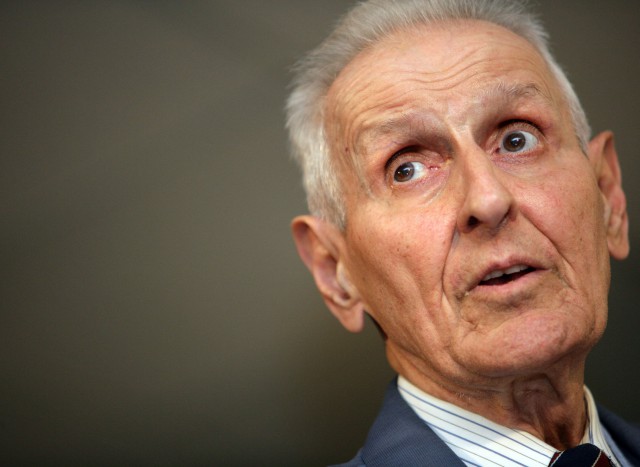 But for director ,
whose movies range from the nostalgic buddy film “Diner” to the
political satire “Wag the Dog,” characters are what first draw him to
projects.

And , the eccentric
doctor who became a national symbol for the assisted-suicide movement
and wound up spending eight years in prison, is the sort of personality
who makes for fascinating drama.

“To me, it’s always what kind of character intrigues
me. Then the subject comes into play. But I found the character
fascinating — because you don’t want to make a movie about a cause.
It’s too much of a polemic,” says Levinson.

So far, the reviews for the HBO film have been
glowing. Variety says it is “filled with moments both poignant and
funny, while still managing to be thought-provoking about the ethics of
euthanasia.”

The movie boasts an impressive cast led by . It also stars as Kevorkian’s ally , as his friend and as his sister . plays attorney .

Pacino’s remarkable on-screen resemblance to
Kevorkian is just one component of a film that re-creates local
settings and depicts real-life people who played important roles in the
saga.

Most of the filming took place in , but the cast and crew traveled to metro for a few days in October to shoot at locations such as the in and the in downtown .

From the settings to the ’90s-style clothing, the
film carefully conveys the era when Kevorkian and his legal battles
were all over the news media.

The film uses some original footage from tapes of
Kevorkian’s consultations with those seeking to end their lives. “I
thought it would be important to allow those faces and voices to be, in
fact, what they were,” says Levinson. In some scenes, as Levinson
explains, “we replaced Kevorkian and put Pacino in” with special
effects.

The movie deals unflinchingly with matters of life
and death, portraying the suffering of terminally ill people, and
re-creating the national debate and legal battles that swirled around
Kevorkian. But there also are moments that show his lighter side.

“What happens is when you meet him, all of those
things are part of him. … There are these things that are humorous in
the way he thinks about stuff or behaves,” Levinson says.

Even small details, such as Kevorkian’s trademark
cardigan sweater, were re-created carefully for the film. “His sweater,
the famous blue sweater, we had knit for” Pacino, says costume designer .

Production designer ,
who worked with Levinson to create an authentic, but stark and
stylized, look for the settings, was familiar with the visual style of
metro . He was here last year for the upcoming film “,” for which he had to make southeast look like .

The 81-year-old Kevorkian, who has been getting a lot of attention lately, attended the premiere of the film last week and appeared on CNN’s “ 360.” He’s scheduled to be interviewed Friday on HBO’s “Real Time with .”

Kevorkian and his attorney, Mayer Morganroth, had dinner in
last week with Levinson, Pacino and others involved with the film. They
also were guests of Sarandon at the new Ping-Pong club Spin, where
Kevorkian played Ping-Pong for an hour, and he met celebrities like and , according to Morganroth.

Kevorkian says he has been getting a positive response as the movie’s debut approaches.

“I went shopping today and about seven or eight
people came up to me as I was going through the line to pay and they
were all very, very supportive and I appreciated that,” Kevorkian says.

And what does Levinson want people to take away from the movie? The acclaimed director is unpretentious and straightforward.

“All I really can do is say, well, this interests
me. I hope it interests other people. That’s really it. … I’ve not
been some kind of scholar of this issue, but this is what interests me.
These were the characters. These were the circumstances. This is what
took place.”

Primary players in “You Don’t Know Jack” — and the actors who portray them.

: As Dr. , the doctor who was the focus of the assisted-suicide debate

: As Janet Good, a Kevorkian ally and assisted-suicide advocate

: As Neal Nicol, a friend who aided Kevorkian on about 100 assisted suicides

: As Margo Janus, sister of Kevorkian

: As Geoffrey Fieger, the outspoken attorney who represented Kevorkian