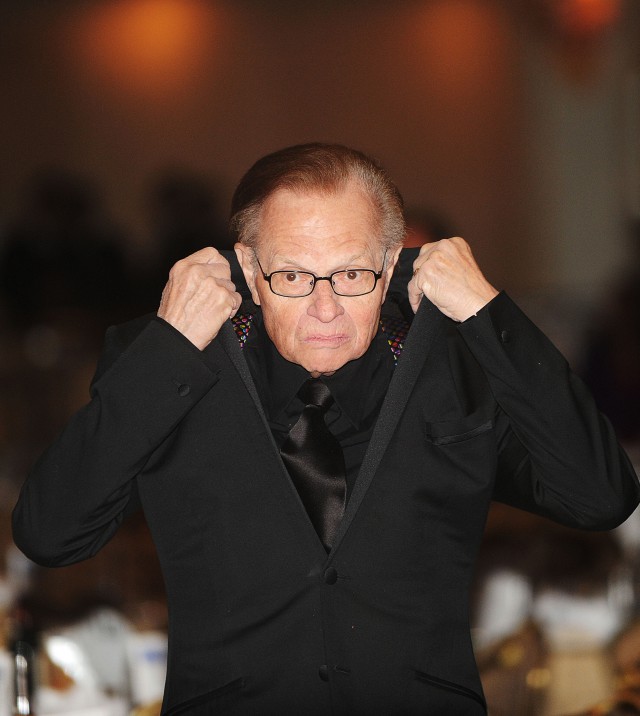 — was flying back to after interviewing basketball superstar at his home in , earlier this month when it hit him.

“I said, ‘I can’t top this,’ ” King recalled in an
interview Tuesday. “I’m not getting younger. I want more time with
other things. It’s time to go.”

After a quarter century as host of “Larry King
Live,” the centerpiece of CNN’s prime-time lineup and a required
stamping ground for striving politicians and contrite celebrities, the
76-year-old announced Tuesday that he will be leaving the program this
fall.

In a nod to how much the medium has changed since King began broadcasting in 1957, he broke the news himself on Twitter.

“The daily grind is tough,” King said in a phone
call moments after his tweet went out. “And there are aspects of it,
you know, when you’ve got to do tabloid shows, which is the nature of
the business, you’ve got to do the girl that’s missing in .
It’s hard to make the case that that is major news, but that’s what
news is today. And my curiosity runs to that, but not nightly.”

King will not be retiring completely: He signed a new contract to host specials on the cable news channel.

But his departure from prime time marks a major
turning point for CNN, which has built its schedule around “Larry King
Live” for 25 of the network’s 30 years on the air.

“He is the very definition of legend,” said , director of the
Annenberg’s School of Journalism. “He has been such a mainstay of CNN’s
programming for so long that it’s almost impossible to imagine it
without him…. You just expect that whatever happens in the world,
we’re all going to get Larry’s take on it. It’s going to be a real
dramatic change.”

King logged more than 40,000 sit-downs with
newsmakers since his first radio show 53 years ago, according to CNN.
The host often referred to himself as an interviewer, not a journalist
— an identification that did little to mollify media detractors who
criticized King for being too lenient with his guests.

“He created the habit of tuning in to cable at
night,” Klein said in an interview. “He made it OK to watch cable. It
is a big historic inflection point.”

King’s decision comes as the network has suffered a
steep fall-off in the ratings this year and is battling the perception
that it has lost its potency. Although “Larry King Live” was the
network’s top-rated show for years, the program’s audience declined
sharply this year, averaging 723,000, down 40% from the same period
last year, according to Nielsen. (His ratings were up 10% in June
compared with May, buoyed by interviews he with James and President , which were promoted as part of his 25th anniversary on the air.)

The diminished viewership prompted speculation that
CNN was looking to replace King, but the affable interviewer insisted
Tuesday that the network never asked him to step down.

“I swear to God, they never pressured me,” King
said, adding that he took the rise and fall of the ratings in stride.
“I do believe it’s cyclical. Ten years from today, there will be
another young , or something, and he’s going to do an interview show, he’s going to
take calls, he’s going to be No. 1, and they’ll be saying, ‘What
happened to those other shows, where the guys are on soapboxes? Ah,
that’s passe.’ “

Klein said the network was open to King continuing in the time slot. “We wanted Larry to decide what he wanted to do,” he said.

It remains unclear who will replace him. British newspapers recently reported that , a British journalist who judges “America’s Got Talent,” was about to sign a deal with the network. anchor name has been frequently floated as a possible successor, and King
himself reiterated Tuesday that he thinks “American Idol” host would be the right pick.

“If he knows his politics, I couldn’t think of a better person than him,” King said.

“There are any number of talented people out there,”
he said, adding that the network is not in negotiations with Morgan, as
has been reported.

The conclusion of “Larry King Live” will add more
volatility to CNN’s schedule as it launches a new roundtable show this
fall hosted by former Gov. and conservative columnist , replacing the newscast anchored by Campbell Brown.

Born , King grew up in , then changed his name for his first radio gig in
at the request of the station manager. Glancing down at an open
newspaper, the young disc jockey plucked the name King from an ad for
King’s Wholesale Liquors.

His CNN show debuted in with then- Governor as the first guest. It was first broadcast out of , but during the O.J. Simpson trial in 1995, King frequently hosted the show from and then eventually relocated there. Now a resident of , he is a regular for breakfast at Nate ‘N Al’s and at Dodgers games.

The broadcaster is known for the dizzying array of
topics he tackles as much as his avuncular style and ever-present
suspenders. In 1993, and debated NAFTA on the program, drawing a record 16.3 million viewers. Palestine Liberation Organization Chairman , of and Israeli Prime Minister came on in 1995 to talk about the peace process.

But King also has devoted many programs to less weighty fare, such as the death of and the disappearance of in .

One of the joys of ending the show, he said Tuesday, will be leaving behind those stories.

After announcing the news to his viewers Tuesday
night, King spent much of the show fielding reaction from newsmakers
and colleagues. called in to complain in jest that he didn’t “ask my permission,” while said “I’ll miss your suspenders. I’ll miss your voice. I’ll miss everything.”

“You were the Mickey Mantle of broadcasters,” said in-studio guest .

King said he wants to spend more time with his wife
and attending his children’s Little League games, but he also has
ambitious plans for his specials. Some initial ideas: hosting a Middle
Eastern summit, interviewing all the living U.S. presidents together
and touring Barbra Streisand’s home.

“I want to really broaden myself and do other things,” he said.

Still, he hastened to note that his nightly program would continue to air until at least October, noting is appearing on the show Wednesday.