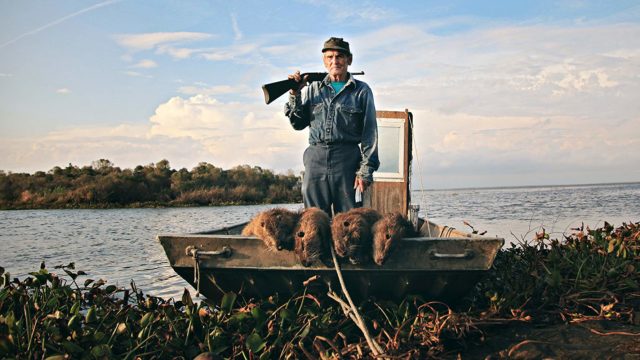 “What about the ROUS?”

“Rodents of unusual size? I don’t think they exist.” — Princess Buttercup and Westley in The Princess Bride

Bad news Westley, they do exist. Growing up to 20 pounds and 24 inches long, with a tail that tacks on another 18, these furry little herbivores sport webbed feet, giant orange teeth and an astounding ability to procreate. Native to South America, the Spanish called these beaver rats “coypu” and “nutria.” The latter stuck when Louisiana began importing them in the late 19th century, and Louisiana has been stuck with the nutria ever since.

How and why the nutria came to America — specifically, Louisiana wetlands — is a story best told in the new documentary from filmmakers Chris Metzler, Jeff Springer and Quinn Costello, Rodents of Unusual Size. Running a brisk and entertaining 71 minutes, ROUS recounts the origins of the nutria fur trade, the nutria invasion of the Louisiana wetlands, the environmental havoc these furry fellows unleashed on an already fragile ecosystem and how the residents of southern Louisiana are responding.

In a way, ROUS is a documentary about Hurricane Katrina, Hurricane Isaac and the next big storm. As ROUS explains, the wetlands are Louisiana’s first form of defense from gulf storms, acting as a buffer from sea swells and high winds. Nutria feed on those wetlands, mowing through fields of grass like buzz saws through timber. Unlike cattle, which eat only the tops of the stalks, allowing the grass to continue growing, nutria chew through the whole thing, even burrowing to find any last remnants. They seem paralleled only by humans in their ability to destroy that which they call home.

It wasn’t always like this. At one point the nutria population of Louisiana was a manageable 5 million. But when it was no longer fashionable to wear furs, the nutria population exploded to 25 million and the damage to the wetlands verged on irreversible. Louisianans are trying everything they can to fight back; from a government bounty on nutria, $5 for each nutria tail collected, to Cajun chefs trying to make nutria meat part of the local cuisine.

The one thing that might work is a resurgence of nutria fur in the fashion business. Edmound Mouton, of the Louisiana Department of Wildlife and Fisheries, calls it “environmentally kosher fur,” because each purchase protects those all-important wetlands.

But what makes ROUS such a fascinating documentary is how Metzler, Springer and Costello present their subjects: free of irony, judgment or commentary. The best scenes are when the subjects talk candidly about their relationship with nutria. Yes, nutria are an invasive species, as so many point out, but they are also a source of income, a way of life and, in one case, a pet. This nutria hunter, who kills thousands of nutrias for the government bounty program, has successfully domesticated one and has a close and loving relationship with the rodent. If that isn’t a metaphor for how humans see their relationship to the natural world, I don’t know what is.