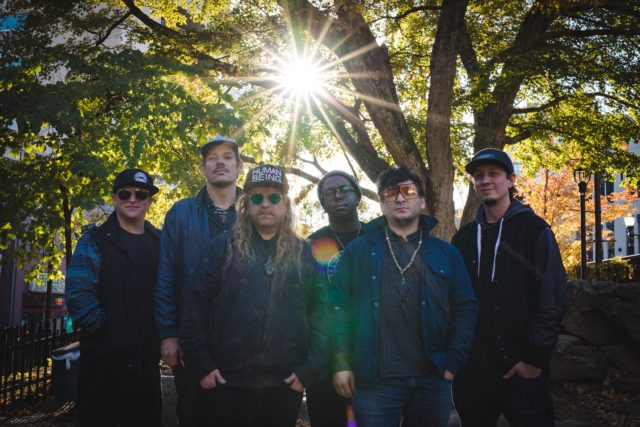 On a cool and slightly overcast evening at Red Rocks, 37 years ago, Miles Davis was doing what he did in those days; which is to say, leading his band through a tenuously constructed set of electric jazz, waving here for tempo changes, glancing there for solo cues, prowling aimlessly across the stage, pinching out riffs through a muted trumpet pointed at his feet.

Throw the switch 37 years forward and out comes the future funk band Lettuce, headlining their fifth Red Rocks appearance. Coming on the heels of Crush and Mt Crushmore, the band’s last couplet of LP-and-extras, they released Witches Stew last fall, a set of late ’60s/early ’70s Davis-inspired music performed live at the Catskill Chill Music Festival in 2016. Clearly a side tributary to the band’s propulsive funk bread and butter, it is available as a digital-only release and an aside, albeit a satisfying one, to the band’s ongoing space-funk discourse with their fanbase.

We caught up with guitarist Adam “Shmeeans” Smirnoff as he was waiting out an Atlanta rainstorm, hoping the weather gods would give a pass to their headlining set at the Candler Park Music Festival, and chatted about the set, fully anticipating he’d tell us that they worked this thing up with hushed reverence, teasing the nuances, treading carefully between tribute and tradition, teasing the polyrhythms, climbing into Miles trademark slurs and Hancock’s chordal inversions.

“It was just a live show, nothing that we practiced for or rehearsed for,” Smirnoff admits. “It was just an idea. I think it was the very first show of the festival that day, so some of the guys who had still been up all night, some were just waking up. … It was Eric Bloom (Lettuce trumpet player) who really put it together. I remember him fighting with our bass player and our keyboard player — really, just yelling at each other, it was really heated for some reason before we played, ’cause I don’t think we truly knew what we were embarking on or getting into at that time.

“But one of the things we did was like, ‘This is improvisational music, don’t hold yourself to exactly what those guys played.’ It would be whack if you tried to just reproduce it.”

And fair enough, it seemed to us. The Bitches Brew sessions were pretty loose affairs, Davis throwing out a line or a progression, frequently giving little in the way of arrangement specifics other than tempo and solo sequence, preferring to let his young players (Hancock, Corea, McLaughlin, et al.) find the arrangements themselves and construct/deconstruct on the fly. Whereas, Lettuce, a well-traveled band with a deep repertoire and airtight arrangements…

Smirnoff stops us right there.

“…or at least we have the ability to trick you into thinking we’re playing off really tight arrangements. Really, we’re just playing off the cuff.”

“No, that’s the truth!” Smirnoff insists. “Honest-to-God truth, man, every show we go in there and do something totally different. We always switch it up. Everyone’s trying to improv new little things here and there.”

“There’s no charts, man. We’re a complete vocal band; we sing everything to each other. And a lot of those horn parts, those guys (Bloom on trumpet, Ryan Zoidas on alto sax) are making up on the spot.”

Dancing on the edge of a cliff, isn’t it?

“That’s the beauty of it,” he says, grinning (if you can hear a grin over the phone). “At least if you fall off the cliff, you’ll discover something new.”

It’s a testament to the band’s success and collective musical telepathy that their devoted following will follow them anywhere, destination frequently undetermined. This is, of course, the “journey is the reward” ethic that has guided uncountable jam bands through decades of festivals the last quarter-century, but Lettuce, with their sly and gracefully informed channeling of house-and-Headhunters sensibilities, makes it stick and leaves a mark.

“I mean, that is really what the draw is to keep seeing us, which is hopefully that we’re going to hit something that we, as musicians, are all excited about playing at that second.”

Which is more or less exactly what the original Miles electric bands were about. Finding that transcendent moment, couched in unforced and under-rehearsed compositional context. Tribute, indeed. The canvas, not always the brushstrokes.

But new material is on the way — a new studio record that Smirnoff can’t help but gush over like a little kid.

“I can’t wait for you to hear the new stuff. We were just listening to it at the back of the bus. We’ve mixed 11 songs,” he says. “This is it, this is the record, we gotta figure out the order, what we’re going to call it. And I think this one is even more special than all the rest.”

Undoubtedly, we’ll hear some of it at the Rocks. Fifth Red Rocks headliner… is this getting routine?

“It’s never routine, man. Everytime, I am just more and more excited. Last year and this year, especially because I’m now a Denver resident, and this Red Rocks will be the very first show that my child gets to come to. … John Scofield told me that since I’m a dad now, I have to play extra funky.”