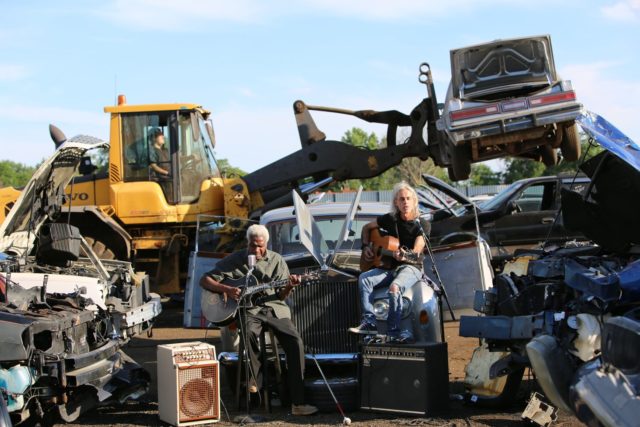 Filmmaker Eugene Jarecki is in search of the American Dream. To find it, he loads up Elvis Presley’s 1963 Rolls-Royce with a camera rig and drives around with politicians, actors, musicians, activists and anyone else willing to climb in and speak their mind. Most talk about Elvis on a personal level, conveying what the man and his music meant to them. Others see Elvis as synonymous with America. “If Elvis is your metaphor for America,” one of the subjects tells Jarecki, “then we’re about to overdose.”

He’s not wrong. Nor is Emi Sunshine, a 13-year-old folk singer who believes a little bit of Elvis’ spirit was left behind just for her. When Sunshine was born in 2004, the proclaimed King of Rock ‘n’ Roll had been dead for almost 30 years.

Sunshine grows older and learns more about her idol. The question becomes what will she think of him then? What will she make of Chuck D’s “Fight the Power” proclamation? “Elvis was a hero to most/but he never meant shit to me/a straight up racist/that sucker was simple and plain.”

Both Sunshine and Chuck D weigh in on Elvis’ legacy in Jarecki’s documentary. Many others come to similar conclusions, praising Elvis’ talent while scratching their head at his lifestyle choices. Jarecki finds even more evidence in a fury of archival footage, expertly constructing a revealing montage of America past and present. But Jarecki’s biggest revelation comes when he visits Elvis’ hometown of Tupelo, Mississippi; one side of the town subsists on Elvis’ legacy while the other side slowly withers away in its shadows. As rapper Immortal Technique tells Jarecki, “The American Dream was always someone’s fantasy. And someone else’s drunken nightmare.”

It’s a nightmare Elvis wasn’t immune to, himself the puppet of manager/conman Colonel Tom Parker. Elvis consistently found himself on the wrong side of a choice, which, as actor Ethan Hawke points out, was always the side that offered the most money.

How perfect then that The Boe is screening 1958’s King Creole in conjunction with its run of The King.

While Elvis made a slew of movies, most of them lightweight dreck, King Creole is a masterpiece of moody noir wrapped around a Faustian bargain. Elvis plays Danny Fisher, a high schooler trying to get ahead when a pack of hoods, led by club owner Maxie Fields (Walter Matthau), ensnare the talented young singer, trapping him in Fields’ web. It’s impossible not to think of Parker and the Memphis Mafia while watching King Creole, and that’s precisely the point. To us watching, it’s a movie; for Elvis, it’s his life.

Both movies illustrate a similar point: Elvis was just another nobody from nowhere when he decided he wanted to be more. He took it, ran with it and became bigger than anyone could have imagined. Then he ran out of gas. You’re welcome to draw whatever conclusions you’d like between The King and the country that crowned him.