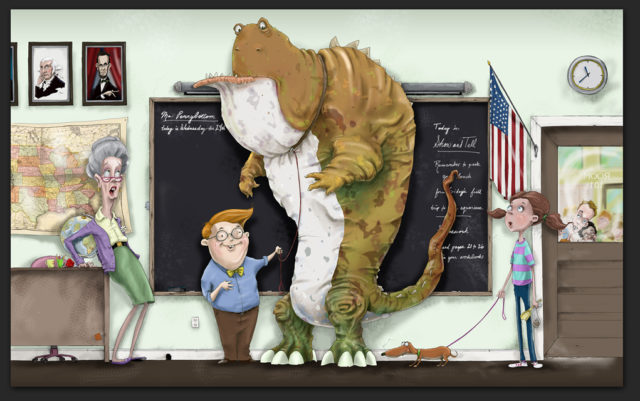 Every one of Mark Ludy’s artworks has a story, whether it’s a recreation of the tale of Noah’s Ark, or a train flying through outer space, or a picture of a gaseous, gun-slinging goose named Gustavo. For Ludy, story is just as important as the picture itself.

“My grandpa would say, ‘Everyone’s got a story, you just gotta find out what it is,’” Ludy says.

Now showing at the National Center for Atmospheric Research through March 2, Ludy is displaying his art spanning the past several years. From his one-off artworks to stills from his multiple children’s books, the exhibit gives the audience a look into Ludy’s wacky, colorful imagination.

Ludy’s own story starts with a childhood doodling “obsession.” When going out to eat with his family, Ludy’s dad would pull out a pen and start a simple drawing on a napkin.

“He’d draw something, like two eyeballs, then he’d pass the napkin and hand me the pen and I’d draw the nose,” he says. “We’d pass it back and forth and the next thing you’d know there would be a big, juicy worm coming out of the nostrils or a tuft of hair coming out of the ears. My dad made drawing fun.”

Through adolescence, Ludy continued to draw, goofing off during class by doodling caricatures of the teachers. When he left high school, he pursued a variety of jobs that utilized his creative talent — designing newsletters, then greeting cards and logos, and eventually his first book, The Farmer, in 1998.

His drawings are fantastical, with a cartoon-like charm. Many of Ludy’s pieces feature outlandish scenes like a cowboy battling an alien or a child bringing a dinosaur to school for show and tell. He enjoys turning narratives on their heads, straying from the expected to discover something more fun.

Ludy finds inspiration in artists like Norman Rockwell, who made subtle exaggerations in his characters to add depth and humanity.

“[Rockwell’s work] resonated with some chord in the human spirit, and I loved that,” Ludy says. “I’m always after the ability to create unique characters as best as I can.”

His goal is to capture the human personality.

“You have such variety with people. Most have two eyes, a nose, a mouth, but there’s such a variety in what a little tweak can do,” he says. “A little fat, a little muscle, how the skin works with that, or how emotions appear — I’ve always found it fascinating to study that in people. So for me, I work to capture that something that evokes thought or feeling.”

Even though he was always a gifted artist, Ludy never thought he’d be a full-fledged professional.

“I didn’t think I’d do art for a living, period. All I could picture was the shrunken cheeks, the fetal position, barren room, lopping off your ear, the starving artist kind of thing,” he says. “That just didn’t appeal to me.”

Still now, as he makes his living off his artwork, Ludy prefers to think of his vocation as a form of communication.

“In high school people are sort of saying pick a route: ‘This is who you need to become. You need to decide now, and all the future course of your life is hinged upon this decision.’ And I hated that,” Ludy says. “But I had a life-changing moment when I was 18 years old, struggling with who I am and what I’m doing with my life. I had a dawning realization that I was a communicator.”

This change in perspective was important for Ludy because it freed him from picking only one label with which to define himself. Communication can be verbal or visual, and there are different tools to utilize.

“In other words, the pen was not an end in and of itself,” he says. “It was a tool, in the hand of the creator or the communicator.”

The title of artist seemed too constrictive for Ludy. He preferred to think of himself as a multi-faceted individual, with a desire to share his stories.

“I was me and this is how I like to communicate. I’m not just an artist, I’m a husband, I’m a dad, I’m a son. That was revelational to me because it freed me to not put this pressure on my back to become the greatest artist ever, but to see it as an ability,” he says. “If I could develop this and become a better communicator with my pen, then it would be meaningful.”

By sharing his truth — his art — Ludy hopes to make the world a better place.

“I can give what I have,” he says. “I think when we give what we got, it’s a beautiful thing.”