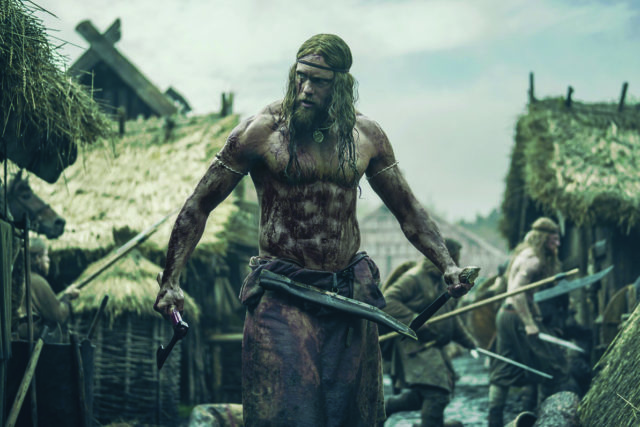 There’s a lot about The Northman that is ancient and just as much that’s mythic. It’s Shakespearean in its bones, but touches of Confucius, Sophocles and Wolfram von Eschenbach are never far from reach. There’s even a surprising tribute to Disney’s The Lion King, which really shouldn’t be too surprising considering that both movies share similar source material.

But I’m getting ahead of myself. First, the story: Viking King Aurvandil War-Raven (Ethan Hawke) has been mortally wounded and worries he will not live to see his young prince, Amleth (Oscar Novak), grow to be a man. Amleth must be initiated, Aurvandil tells Queen Gudrún (Nicole Kidman). He is but a boy, she protests. Nonsense, the dying king retorts; my grandfather ruled when he was 13. True, the fair queen responds, but he had to kill his uncle to do so. Even those unfamiliar with Shakespeare’s Danish play know director Robert Eggers is laying it on thick.

The Northman is familiar territory for Eggers, even if it is his first shoot outside the U.S. and with a mighty budget ($80 million reportedly). What’s familiar is the historical research and period detail—or what I assume to be historical research and period detail. As with The VVitch (2015) and The Lighthouse (2019), The Northman is a particular brand of madness stitched together by scholastic study.

Back to young Amleth—rhymes with Hamlet—who goes on the run after uncle Fjölnie the Brotherless (Claes Bang) murders Aurvandil in cold blood and takes Gudrún as his bride. Amleth vows to return to Iceland to murder his uncle, free his mother and reclaim his kingdom. Ah, the salad days of youth.

Years pass, and Amleth (Alexander Skarsgård) returns to Iceland with surfer’s abs, stooped shoulders and a one-track mind. He’s a warrior, and a pretty adept one at that, posing as a slave to get close to Fjölnie. I’m not so sure about the efficacy of Amleth’s plan, but it does get him close to Fjölnie. So close, Amleth could probably jump him and snap his neck. But Amleth waits. And waits. And waits a little more. For some, murder is murder. For Amleth, it’s delayed sexual gratification.

The Northman is teeming with ambition. The ninth century is not a tidy time to be alive, and Eggers and co-writer Sjón wallow in the muck and mire of existence, the viscera of battle. Some of it is spectacular—Amleth scales a fort using only his ax, and cinematographer Jarin Blaschke captures Skarsgård doing it in one unbroken take.

Blaschke’s cinematography is one of the highlights of The Northman. The images are dripping with violence, but they are also arresting and hallucinatory at the same time—ditto for Louise Ford’s editing, which puts viewers in a headspace somewhere between prophecy and madness.

Eggers and Sjón’s script is episodic, each section introduced by titles presented in runes. Accompanied by Robin Carolan and Sebastian Gainsborough’s ominous music, these section headings provide a dramatic touch but also give the proceedings the rote feeling of a paradigm. That’s disappointing, particularly in the third act, when a revelation threatens to undermine Amleth’s vengeance but fails to derail it. If Eggers intends to show how revenge—life-long revenge—corrupts and corrodes and consumes everything that is good and holds hope, then the ending of The Northman falls back on the old heroic same old same old. Some might find glory in it. For the rest, it’ll just feel empty and familiar.