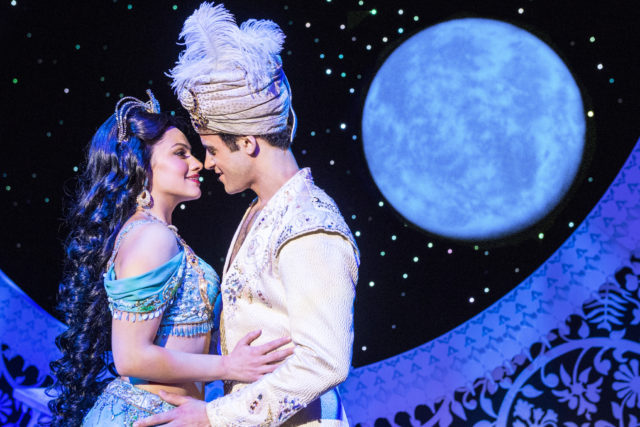 With a pen and a blank page, an animator has the ability to create whatever his imagination can concoct — maybe a flying carpet or a larger-than-life genie in a bottle. When a cartoon gets translated into a stage production, however, theater crews are bound by the unfortunate constraints of reality. But with some imagination and illusion, the stage provides ample ability to bring the endless possibilities of the 2-dimensional into our 3-dimensional world.

Aladdin, the musical, is now playing at Denver’s Center for the Performing Arts through April 28. Based on the 1992 animated Disney film, the Broadway production of Aladdin opened in 2011. It then went on to secure five Tony nominations, taking home a win for best featured actor in a musical for James Monroe Iglehart as Genie.

For those unfamiliar, the show follows the street savvy Aladdin as he steals to make a living. By a chance encounter, he meets Princess Jasmine, who is sick of the slew of suitors waiting to marry her. Upon finding a magic lamp with a surprise inside, Aladdin gets a chance to court the princess. Meanwhile the evil Jafar plots to take over the kingdom and overthrow Jasmine and her father, the sultan.

Backed by the powerhouse that is Disney, the stage production of Aladdin could be phoned in and still guaranteed a modicum of success. Thankfully, its creators deliver a show full of fun and creativity. From start to finish, the show is a delight to watch, stacked with moments small and large that wow the audience.

One of the most invigorating attributes of the show is its cartoon-feel. Using quick changes, slights of hand and clever staging elements, Aladdin’s stage production skillfully mimics the slapstick, playful quality of its source material.

Aladdin’s creators utilize each theatrical element to its maximum potential. Costumes, makeup, sets, staging and choreography elevate the show individually, but it’s their work in tandem that creates the real magic. This is exemplified in songs like “One Step Ahead,” where Aladdin runs through a crowded marketplace, and the audience is ushered into a surprising world of rich colors, alluring textures and lively dancing.

The stage show breathes new life into classic moments from the film. “A Whole New World” serves as one of the most stunning scenes in the show, with Aladdin and Jasmin riding a flying carpet through a sea of stars. For just a moment the adult brain might be tempted to ponder how the trick is done, but rest assured, it’s best to submit to the power of childlike wonder and simply enjoy the beauty and magic of the scene.

The musical also features new songs, some of which were cut from the original film. Aladdin’s ballad “Proud of Your Boy” gives more depth and motivation to the character, and the hilarious “High Adventure” provides an engine that drives a hijinks-heavy scene for Aladdin’s friends. Yet songs like Jasmine’s “These Palace Walls” and the Aladdin/Genie duet “Somebody’s Got Your Back” feel superfluous. All in all, the unsuccessful new additions aren’t too distracting, but at two and a half hours the show feels bloated enough to warrant some cuts.

Beyond the stage tricks that make the show look so magical rests the nuclear core from which the show derives its power: the cast. Aladdin and Jasmine, played by Clinton Greenspan and Isabelle McCalla respectively, are talented performers with robust voices. They capture the nostalgic, charming Disney feel that’s essential to the roles.

The couple is perfectly countered by villain Jafar (played by Jonathan Weir) and his non-parrot sidekick, Iago (Jay Paranda). The duo elicit great laughs each time they are on stage. The leads are supported by a wonderful chorus and a handful of colorful background characters, including Aladdin’s three friends, Babkak (Zach Bencal), Omar (Philippe Arroyo) and Kassim (Mike Longo).

But the star performance of the show undoubtedly goes to Michael James Scott, who brings to life the awe-inspiring Genie. Bursting with energy, Scott delivers the night’s biggest laughs and infuses the show with non-stop spirit. He’s the vehicle for the show-stopping number “Friend Like Me” — a number so packed with frivolous amusement, by its end you feel winded from such a barrage of joy. That scene alone should be an example to all future musicals on how to adapt a cartoon.

Aladdin, the story, is no doubt a crowd pleaser. But this production pushes beyond the story’s established reputation to create something special in its own right. Be it a Disney fanatic or a theater snob, there’s something for everyone in the show. As Aladdin and Jasmine sing, it’s “a wondrous place, for you and me.”