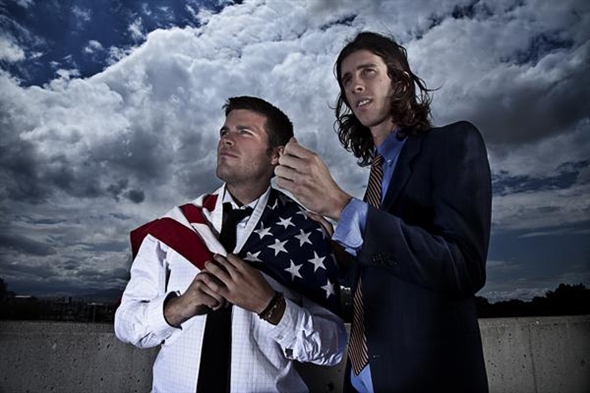 On the Dec. 4 broadcast of the mtvU Woodie Awards, Sean Foreman and Nathaniel Motte walked out on stage to present the Left Field Woodie Award dressed like a couple of Lady Gagas. Foreman and Motte, known as the Boulder-bred group 3OH!3, lost the Best New Artist award to the pop diva at MTV’s Video Music Awards in September. Was this their way of getting back at her?

“Nah, we weren’t dissing her, we were just being funny and having fun,” says Motte. “She’s had a great year; she’s had like four or five number ones. Personally, I think ‘Just Dance’ is a rad song, but I’m impartial to everything else. But I respect what she’s done, she’s put in a lot of work and she’s done some cool stuff. But it was actually my idea to do the whole thing, and we went back and forth with the MTV people and they very kindly made us some Lady Gaga outfits.”

This is how the duo rolled since coming together in 2004 — a tongue-in-cheek attitude that permeates throughout their music. And it worked. The two rapper/producers paid dues all over Colorado through 2006 and 2007, doing shows, getting radio play and garnering a rabid following.

Once the guys started playing out-of-town shows and scored a spot on The Warped Tour, it was a wrap. Atlantic Records’ subsidiary Photo Finish Records signed 3OH!3 to a deal, released their album Want in July 2008, and they’ve been all over the world and MTV since. The video for their song “Don’t Trust Me” was in constant rotation and helped the single go double platinum. They followed that hit with “Starstrukk,” recording a version with sexpot singer Katy Perry.

“She has a very nice and soft tongue, it was very soft,” Motte says, referring to Perry licking his face in the video for the song. “It was good, man. I think her tongue and her teeth were freshly brushed when she did it. Unfortunately, it was just one take.”

With the duo’s extensive touring schedule, they’ve been unable to hunker down and concentrate on a new album. They have, however, been able to do a few things in the last year. They contributed a song to the upcoming soundtrack for Tim Burton’s Alice in Wonderland. They also collaborated with new artist Kesha on her second single, “Blah, Blah, Blah,” which is sure to break soon; plus they recorded a song with one of their idols, rapper/producer Lil Jon, which will hit airwaves in 2010. Their single, “Still Around,” is also gaining momentum on radio. But as soon as everything slows down with the touring, the award shows and special appearances, they’re hitting the studio in full throttle.

“We’re going to get back in the studio in the first few months of the year and write a whole new record,” Motte says. “We’re excited about the life of our album [Want], it was prolonged by the success that we’ve had. It’s a good thing, in the sense that we got to tour all over the world, play shows and kind of grow ourselves as a band, but at the same time, it’s been awhile since we put out some new music. So we’re itching to go write some new music and put a new CD out. So we’ll hit the studio early next year and release something in the spring or summer.”

3OH!3 returns home to Colorado this weekend for a pair of shows, the first on Saturday, Dec. 19, at the Fillmore Auditorium in Denver. The show will feature some of the group’s favorite Colorado bands: The Pirate Signal, Meese and Photo Atlas. The second show will be at Boulder’s Fox Theatre the following night, Dec. 20, where all the proceeds will go towards Motte and Foreman’s favorite charities, Colorado Coalition for the Homeless and Emergency Family Assistance Association, respectively.

“It’s called Back to Basics,” Motte says. “We’re doing our whole first self-released, self-titled album, and we’ll have some friends open for us, so it should be a fun night.”

In the meantime, the group is dealing with another award show loss. At this year’s mtvU Woodie Awards, 3OH!3 was nominated for the Performing Woodie Award and lost to another heavy hitter — Green Day.

“At least we do our losing well,” Motte says. In our eyes, however, the band keeps winning.