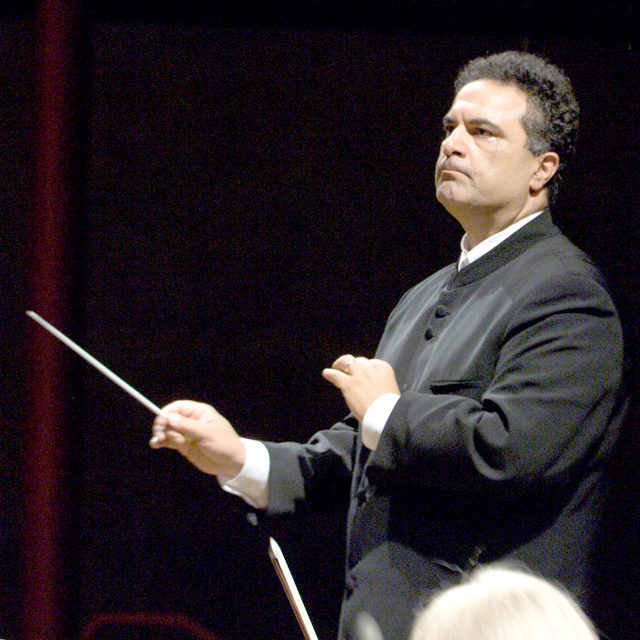 Beethoven’s Ninth Symphony has become the ultimate summit for many in the musical world: conductors, orchestras, singers and audiences.

The symphony, and especially the last movement with its text proclaiming that “all men become brothers,” has become equal parts an artistic, spiritual and political icon of Western culture. It’s the first choice for orchestras celebrating everything from an important anniversary to the 1989 fall of the Berlin Wall, when Leonard Bernstein conducted a multi-national performance in the city where the wall once stood.

As the culmination of their 13th season, the Bahman Saless and Boulder Chamber Orchestra (BCO) will reach that summit Friday at Macky Auditorium, with additional performances in Lakewood on Saturday, May 6 and Lone Tree on Sunday, May 7. Performing with the BCO will be the Boulder Chorale and soloists Szilvia Schranz, soprano, Rebecca Robinson, mezzo-soprano, Jason Baldwin, tenor, and Malcolm Ulbrick, bass.

As it has for many orchestras, the Ninth closes the cycle of the Beethoven symphonies for BCO. It’s a large undertaking for a small orchestra, but it was a goal that Saless and BCO could not pass up.

“It’s the last Beethoven symphony we haven’t done yet,” Saless says. “We sat together with the board and said, ‘Well, we’ve done all the eight, what are we going to do next?’ So it just kind of made sense from a historic point of view.”

To match the 115 singers of the Boulder Chorale, BCO has added a handful of string players, but otherwise it remains essentially a chamber orchestra. One result of using a relatively small string section is that the winds become more prominent in the overall sound of the ensemble.

“You are going to hear a lot of interesting things,” Saless says. “The winds and the brass are going to play a much bigger role. What’s written for the woodwinds and brass is outstanding, and I’m hoping we’re going to hear all of this in a different light than how we’ve heard Beethoven’s Ninth all these years. There’s going to be some serious surprises.”

From the very first movement, Saless sees the Ninth Symphony in an unusual light. “The whole beginning section is a burial scene, where Beethoven is burying old ideas,” he says. “He’s literally digging the ground and throwing the old ideas in the grave. That explains the darkness of the first movement. It’s amazing! And then every movement is a little step further away from the past.”

In Saless’ interpretation, after that dark beginning, the symphony gets less and less serious as it proceeds. “It gets lighter and lighter and lighter,” he says. “And by the end of it he’s making jokes. There are certain things that jump out, and I don’t think they are mistakes. I think he is purposely trying to do funny and ridiculous, especially in the finale.”

He hopes that the audience won’t be afraid to laugh when they hear something funny. “A lot of people think just because they are going to a classical concert, it’s like sitting in a church: they have to be quiet and not have emotions. But in Beethoven it’s absolutely the opposite. You’re supposed to get these crazy reactions, because of his humor and his irony. That irony has to come out and it’s just all over the place.”

Saless points particularly to the “Turkish March” section of the last movement. Its bouncing rhythm and cymbals and offbeat accents don’t seem to fit with the more exalted portions of the “Ode to Joy.” The beginning, a series of rude noises in the lowest voices of the orchestra, makes some listeners uncomfortable.

“Conductors just don’t take advantage of that and bring it out,” Saless says. “A lot of people have been hiding things that feel like it’s not appropriate to their interpretation. I’m hoping we will get a lot of this humor out during these performances. The trumpet part is like a cartoon, but when you hear it in that light, you think, ‘Ah! Of course he meant to do this!’”

Turning to the overall message of the symphony, one of universal brotherhood, Saless says, “It’s a very timely piece of music, given how we are all [feeling] a little bit uncertain about our values.”

In that spirit, the Boulder performance is billed by BCO as a “Unity Concert,” with the opportunity for audience members to select among three nonprofit groups —American Civil Liberties Union, Out Boulder, and Emergency Family Assistance — to receive a portion of the proceeds.

But most of all he wants the audience to enjoy the emotional arc of the symphony. “It just keeps getting lighter and lighter and more joyous,” he says. “I’m hoping that all comes out throughout the hour and five minutes.”