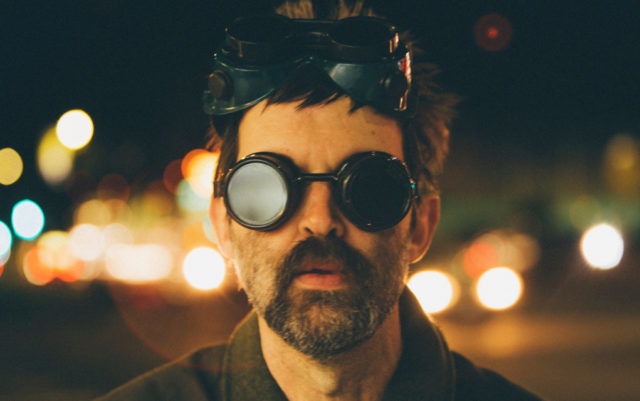 “You can make changes. Thus, you can change the world. Right?” It’s a bit of wisdom Mark Oliver Everett, who largely goes by the moniker E and has been the man behind the EELS for more than two decades, offers in the notes to his latest album, The Deconstruction. It’s a wholly optimistic message, backed by Everett’s uncanny ability to mix hope with despair, giving voice to the tensions of life through various alternative rock and pop styles.

Much has been written over the years about Everett’s devastating familial history, some of it by Everett himself in his 2008 memoir Things the Grandchildren Should Know. But it’s worth mentioning again as the tragedies never stop informing his present realities. “That stuff with my family was a long time ago now, but it’s not the kind of stuff you ever get over,” he says.

He is the son of physicist Hugh Everett III, whose many worlds interpretation of quantum mechanics wasn’t accepted in large part until after his premature death at the age of 51 of a heart attack. As a teenager, Everett found his father’s body in bed. But when his father was alive, Everett has said, he was emotionally absent, and the family operated at a certain level of dysfunction through humor, which often comes out in his music.

“Humor is just natural to me because I grew up in a funny family,” Everett says. “To a fault. It was sort of the only way the family knew how to communicate, through humor and sarcasm.”

In some ways, Everett says, music saved him. Inspired by the likes of John Lennon (“I noticed his stuff about his mother and himself was a lot stronger than his political stuff.”) and Neil Young, among many others, Everett began forming the foundations which would later be signatures of his career.

For example, at age 16, his sister took him to Young’s Rust Never Sleeps concert with Crazy Horse, a surprising theatrical production unlike the expected jam sessions Young was known for at the time. “It’s just this crazy production and show, that no one was expecting from Neil Young. There was no advanced warning, no internet back then,” says Everett, who often incorporates that element of surprise into his own live shows. “It was just that kind of thing that had a big impact on me.”

After a few solo releases, Everett officially formed the EELS with the 1996 release of Beautiful Freak, which included several alternative hits including the iconic “Novocaine for the Soul.” He soon followed with 1998’s acclaimed Electro-Shock Blues, a deep dive into the mental illness and suicide of his sister, and only sibling, and his mother’s cancer diagnosis. She died shortly after the album’s release, his cousin a few years later in the 9/11 attack on the Pentagon.

“I feel really lucky that I’ve had music in my life,” Everett says. “It’s definitely the thing that got me through more than anything else. Just having something to do and to focus on. You know, it’s not an easy life. … I can’t believe that I’ve made it this far.”

Over the next 20 years, the EELS released a dozen or so albums and toured relentlessly, until four years ago when Everett decided to take a hiatus in which he got married, had a son and got divorced, all the while slowly working on The Deconstruction.

Becoming a father in his early 50s changed everything about life for Everett, who went from being the sole member left in his family to thinking about future generations in a much more tangible way.

“I’m lucky now that I’m in a situation I never saw coming in that I have a son now. And I don’t really have time to dwell in the past much anymore,” Everett says. “It’s an incredibly life-affirming feeling to have a little one depend on you.”

While The Deconstruction speaks to where Everett finds himself at the present moment, as a father raising a son in the age of Donald Trump (back to that mixture of hope and despair), it is reminiscent of his earliest work in both form and content. There are a few quintessential elements of almost any EELS song: a bit of ’90s grunge mixed with upbeat ’60s pop drumming, sweeping string melodies with a few horns thrown in and E’s darkly humorous, sometimes melancholic but ultimately optimistic lyrics.

There’s a certain tension Everett writes into every EELS song, into each album as a whole —  a constant tug of war between depression and humor, tragedy and hope, singing to the world around him as well as to the soul within.

“A lot of the songs are a message to somebody I know, but they’re all always simultaneously a message to myself,” he says. “Ultimately what I’m trying to do is reflect all the different shapes and flavors of life. There’s a place for all [of it].”