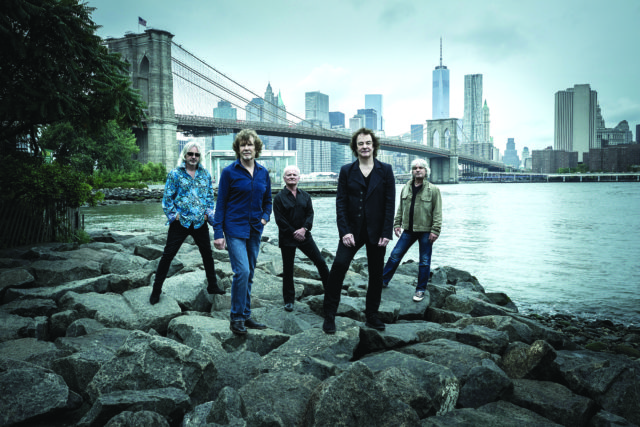 Late last year, sometime in October, Rod Argent got a call from Billboard. The Zombies’ new album, Still Got That Hunger, had debuted at No. 35 on the Top 100 — their first album to grace the chart since 1969.

Argent laughs as he admits, “It wasn’t there for very long.”

Short lived as it may have been, it was a testament to the impression the mid-’60s psychedelic pop band left on the musical landscape in just four years — enough of an impression to successfully crowdfund Still Got That Hunger. They were a band ahead of their time during the British Invasion that brought them to American shores in 1965. While The Beatles still wanted to hold your hand, The Zombies were embracing the swirling abstract sounds of psychedelic rock that typified later work by The Fab Four. The Zombies were playing pop music, sure, but they eschewed the guitar-driven sound of the day in favor of Argent’s jazz- and classical-influenced organ and piano, rich three-part backup harmonies and mixed time signatures, all punctuated by lead singer Colin Blunstone’s high-pitched, breathy vocals.

And while success came quick for the five lads from St. Albans, England, it was also complicated and fleeting. In 1964, their debut single, “She’s Not There,” peaked at No. 12 in the U.K. and No. 2 in the U.S. They were off to the States after that, to play seemingly endless sets like the gigs they played for DJ Murray the K’s Christmas show in Brooklyn’s Fox Theatre.

“[We played] six shows a day, as I remember it from 8 in the morning… it was a long time ago,” Argent says. “We finished at 11 at night. Then we had to travel the subway back to our hotel.”

It was a dream come true for these young men to be “in the land of our heroes,” as Argent puts it.

“We couldn’t believe it. Everything we liked, to us, was American,” he says. “Being in love with the early music of Elvis, who seemed like a mythical human being, from a mythical place. Suddenly, not only were we topping the charts in America, but we much, much later found that Elvis had our songs on his juke box.”

While The Zombies would have two more charting singles in the U.S. (and even more in Scandinavia and the Philippines), “She’s Not There” was their only hit in the U.K., a fact Argent says damned the band’s commercial success.

“In those days, the world was a much bigger place and things weren’t as international, so people were, for the most part, based in their home countries,” he says. “In the U.K. we only ever had one hit; we later found out many years later that in our three-and-half years of being professional, we always had a hit [somewhere in the world]. That seems inconceivable now, but in those days you just didn’t know.”

In 1967, the band recorded their second album, Odessey and Oracle (the misspelling of odyssey was a mistake by the artist who designed the album cover). They had no money for session musicians — Argent and Chris White, the songwriters of the group, paid for the stereo mixes themselves — so they used a Mellotron, a keyboard that allowed them to mimic orchestral instruments.

But the album wouldn’t take off in the U.K. and almost didn’t get released in the U.S. at all. By 1968, The Zombies had broken up.

“The reason we broke up was commercial,” Argent says. “The sense that the songwriters in the band always had plenty of money — because we had very honest publishers — it meant it was a continuing income stream.”

But the live gig money wasn’t there, and the boys weren’t 19-year-olds fresh out of high school anymore. They needed real paychecks.

But there were no hard feelings, Argent says, just a sense of reality.

Even the surprise success of Odessy’s closing track, “Time of the Season,” wasn’t enough to get The Zombies to regroup and hit the road — but it did lead to some fake Zombies touring groups, one of which included two future members of ZZ Top, Dusty Hill and Frank Beard.

Argent says he only found out about this a few months ago.

“I think that’s absolutely hilarious,” he says. “I said when I’m done with all of this [Zombies touring], I’m going to start a fake ZZ Top band.”

It’s hard to say when Argent and the current Zombies line up — Colin Blunstone, Steve Rodford, Tom Toomey and Jim Rodford — will have that chance at a fake ZZ Top band. Their music endures — and not just with those who grew up listening to it.

“We played in the Philippines last year. We were huge in the Philippines in the ’60s,” Argent says. “A grandmother brought her 18-year-old granddaughter to the show, and afterward the girl told me, ‘I came along kicking and screaming, but you played this song, “A Rose for Emily,” and I was crying at the end.’

“That was fantastic,” Argent says. “That it can actually move someone in 2015. It feels magical — it feels like a real privilege.”