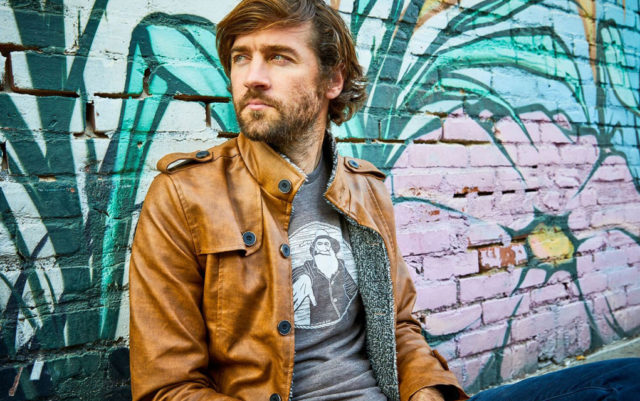 It only seems appropriate that John Craigie is on a road trip when he takes my call. The California-born, Portland-based singer-songwriter is known as a modern-day troubadour, a traveling poet with comic flare, whose folk songs chronicle his journey through life and those he meets along the way.

“Most of it is from human interaction; I tend to find that the songs are either my stories or stories that I hear from somebody else,” Craigie says about his music. “I’ve learned that if you’re really honest with your audience and show them who you are, that’s the best you can do.”

His songs are mostly vignettes, flashes of humanity that tap into a deep folk heritage, speaking to the present moment in timeless fashion.

“It’s like a funeral out there/Don’t let the darkness break you my friends/There are so many of us/And only one of him,” he sings in “Presidential Silver Lining,” a song Craigie wrote in 15 minutes before a show right after the 2016 election, hoping to encourage the audience.

As Craigie tells it on stage, he wrote the song after a night in a New Orleans bar where he met a guy who told him he wrote “Mr. Tambourine Man,” but Bob Dylan stole it from him.

“I decided in that moment I would steal everything else he said and put it into my song,” Craigie says on the recording. “I figured if it worked for Bob, maybe it could work for me.”

Harmonica melodies and a rowdy drum beat surround the strum of acoustic guitars.

“When the apocalypse is over/I hope you like your job/Ain’t it a shame/Nobody sets anybody free anymore.”

Although he has several studio recordings, Craigie really shines on his live albums, which are reminiscent of Dylan’s sparse live recordings, but interspersed with spoken tracks, where Craigie channels the spirit of late-comedian Mitch Hedberg in both vocal cadence and intonation.

Emulating his folk heroes like Arlo Guthrie, John Prine and Loudon Wainwright, Craigie has also been inspired by humorous singers like Adam Sandler and New Zealand duo Flight of the Conchords. For Craigie, it’s all about the dance between what his website calls “humorous storytelling and serious folk.”

“In the early days, I realized that if I was too funny and then I played a serious song, people would say, ‘What’s that?’” he says. “So that balance is necessary.”

Background conversation and radio, along with the sound of wind swirling around the car as it moves down the road, intersperse our conversation. It’s just before the Thanksgiving holiday and Craigie is with the folk group Shook Twins, traveling to an annual holiday show in Sandpoint, Idaho. He’s technically on break from his fall Keep it Warm Tour, during which he’s collecting new/gently used jackets, gloves, hats, scarves and socks, as well as donating $1 from each ticket sale to area nonprofits working with the homeless population. (Bridge House is the beneficiary for the Boulder show.)

“Portland has a large homeless problem, as do many large cities, and it’s always on my mind as it gets colder,” Craigie explains.

It’s something he can relate to, as he started his career as somewhat of a vagabond, traveling from city to city, unsure of where he might end up each night but hoping to book gigs along the way.

“One time I was playing in Winter Park at a bar, back in my bar days, and I remember I did the gig and then I was going to sleep in my Astrovan that had a bed in it,” he says. “There was a thermometer in it and it said minus 1 degree. For a California boy, I was just like, ‘We’re all going to die.’”

So he went back into the bar, and told the bartender he was afraid to sleep in his car. In turn, the bartender offered Craigie his keys, and said, “I have to stay here until closing time, but the guest room is third door on the left.”

The room was freezing when Craigie got there, so he just put on all of his clothes and crawled into bed. In the middle of the night, he woke up to snow all over the room. “I looked and the drapes were closed but the window had been left open. I actually would have been better off sleeping in my car,” Craigie laughs. “But I survived and that’s always been a thing for me.”

It’s hard to say what really came first, the wanderlust or the music. For Craigie, the two seem intimately intertwined, one almost impossible without the other, and both a way of life for the foreseeable future.

“When you like doing something, it’s hard to imagine not doing it,” Craigie says, without being clear if he’s talking about music, his vagabond life, or both.

“It’s what keeps me inspired, it’s what keeps giving me material,” he says, attempting to clarify. “And I’m not that into staying in one place for too long, I never have been.”