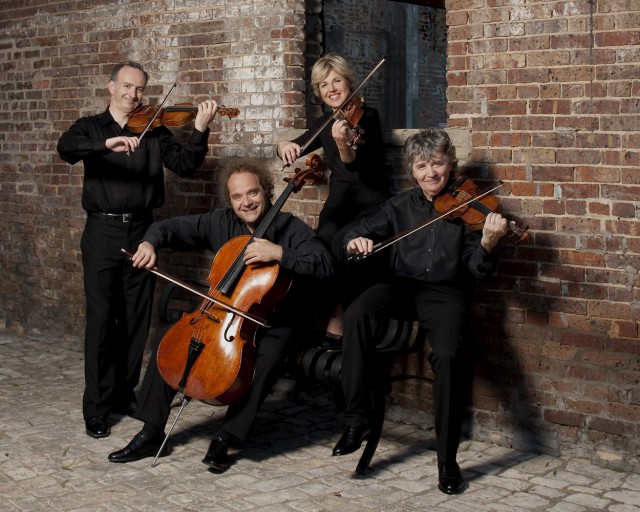 The Boulder Philharmonic’s season finale concert has more unusual angles than a geometry textbook. And fortunately for Boulder’s classical music audiences, they are all positive.

The rare appearance of an entire string quartet as soloists with orchestra is another intriguing angle. And there are others: Edward Elgar’s little heard “Introduction and Allegro for Strings,” which has the quartet in featured roles, should be of interest to anyone who relishes the rich sounds of the late Romantic style.

In fact, the program is filled with infrequently performed music that provides a reason to turn out. Apart from the Elgar, two solo works for viola — performed by TakÃ¡cs violist Geraldine Walther — composed by the early classical composer Johann Stamitz and the late Romantic Max Bruch, are both well worth hearing. And filling out the program is Brahms’ least familiar orchestral work, the Double Concerto for violin and cello performed by the quartet’s violinist, Edward Dusinberre, and cellist AndrÃ¡s Fejer.

And particularly fascinating is how the entire concert explores different ways of presenting soloists with orchestra.

Classical audiences are familiar with concertos that match a single soloist against the full orchestra. As Boulder Philharmonic Music Director Michael Butterman explains, “these solo concertos are part of that Romantic archetype of the noble individual or the hero. They celebrate not only the individuality of the soloist, but also the soloist’s prowess on the instrument, with a lot of bravura display.”

That is the Romantic approach, but neither of the solo works for viola on Saturday’s program are written on the heroic model. The Stamitz Viola Concerto, written in 1774, offers some bravura display (Stamitz wrote it for himself to play), but it predates the soloistas-hero, and Bruch’s Romance for viola and orchestra is more of a lyrical meditation. As Butterman describes them, “These two pieces show two sides of the viola’s sound — one crisp and technical, the other lyrical and romantic.”

The crisp and technical Stamitz is “fun to play and hear because it’s a joyful romp in the first and last movements, giving the soloist plenty to do,” Walther says. And she calls the Bruch “a beautiful romantic jewel of a piece.”

If the solo concerto can be a heroic drama, double concertos are the classical music equivalent of the “buddy movie.”

“It’s more about the partnership than the individual,” Butterman says. In that regard, Boulder audiences are especially lucky to hear Dusinberre and Fejer play the Brahms.

“The Brahms Double is a gorgeous piece with beautiful melodies, emotional intensity and a lively finale,” Dusinberre says. “I feel lucky to perform it with AndrÃ¡s, having already played so much of Brahms’ chamber music with him.”

Such consummate partnerships are not necessarily the norm, as Butterman explains. “I’ve seen it done by a couple of stars who might not have spent much time working together, and who may be used to playing solos and not necessarily listening to each other.

“In our case, we have two musicians who are not only superb virtuosi, but also consummate collaborators — musicians whose years of playing together in the TakÃ¡cs make them ideal duo partners.”

If these three works represent different angles on the concerto, the Elgar Introduction and Allegro is something else entirely. It was written in 1907 to show off the string players in the newly formed London Symphony Orchestra.

“It’s a virtuoso work for string orchestra, and there happens to be a featured quartet,” Butterman says. “It probably was intended for the principal players of the orchestra. But it’s not like they are always in the fore, and the orchestra is playing the accompaniment. They are really part of a larger fabric.”

“For example, there’s a fugue in the Allegro part, and most of it is carried by the string orchestra, while the solo quartet plays something a little more like, almost a unison melody.”

“The Elgar is more like a Baroque concerto grosso” is the way Dusinberre explains it. “We play a few measures of solo writing here and there, often on our own, not accompanied by the orchestra. And at times we double the string orchestra. In fact, the orchestral writing is more difficult than that for the solo quartet!” A solo piece where the accompaniment is harder than the solo part?