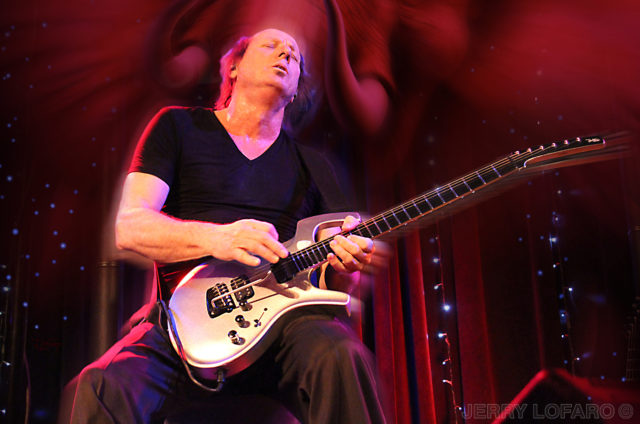 There is some glory, although not much, in being informally regarded as the greatest sideman guitarist of the last 40 years.

But in the case of Adrian Belew, who could at the very least be nominated in that glory-impoverished category, even that wouldn’t be a slam dunk. Not that the Twang Bar King himself hasn’t the chops or seismic fury to qualify — few guitarists have danced on the electric guitar’s sonic event horizon as feverishly as Belew — but the guy just doesn’t dress the part. Sonic foil to Zappa’s gnarled machinations, right-brained anarchy to Robert Fripp’s left-brain fretboard calculus, summoner of dystopian grey-tone flourishes beside Trent Reznor, incising scar tissue across the Talking Heads in the heat of their proto-tribal Eno days, Belew has costumed some of the most challenging and cortex-gripping recorded music of the last few decades in fearless and sublime alien-landscape chroma.

At heart, of course, Belew is a pop star, or at least bears the soul of a pop star, a tuneful abstractionist who strays from his Beatles-roots instincts far enough to plant his flag of discovery before returning to terra firma. Those who had followed his career up to that point grinned at the inside-joke irony of his fluke semi-hit “Oh Daddy,” from 1989’s Mr. Music Head, which featured the frustrated lamentations of his daughter that Dad was a touring pop musician that hadn’t yet scored a George-Michael-sized chart smash.

And despite having played on more than 150 albums and bearing the enduring reverence of many of the musicians he’s played with (Reznor once called him “the most awesome musician in the world”), Belew found himself without steady big-stage work in 2013, having (more or less) amicably walked away from a Nine Inch Nails reunion project and being politely uninvited from Fripp’s resurrection of the current incarnation of King Crimson. So the Twang Bar King returned to his Power Trio, the group he founded with Eric and Julie Slick (Tobias Ralph sits behind the drum kit these days), a sibling rhythm section he met in 2006 at Paul Green’s School of Rock, and immersed himself in Flux, his mobile app containing songs, half-songs, bits of sonic noise and other audible morsels that were either too incomplete for stage/album material, or simply experimental fragments better left un-contextualized. The companion app, Flux:FX, is a mobile audio manipulation application for iOS, and both have been warmly received in the mobile app space.

For longtime fans, the unvarnished Belew is both an epiphany and curiosity, the guitarist being a virtuoso musician in dimensions typically not embraced in that prehistoric guitar-driven trio setting, yet possessing both the presence and catalog to fill a setlist with plenty left over. Nods to the past are not entirely excluded from his sets, of course; he played in a series of Bowie tribute shows this past winter, and he seldom gets off a PT stage without an affirming rendition of “Elephant Talk,” usually delivered in a manner that coaxes one to wonder if the thing ever really needed Fripp in the first place.

Part cranium-cracking fury, part damaged pop, part modal prog, the PT gig is and will probably remain Belew’s nutritional mainstay, and that’s just fine. It’s all the noise and thunder that a club stage can handle.

And it’s also worth mentioning that Belew returned to his curious animal-trib roots recently, having scored the Pixar short Piper, the tender, animated short film used as a lead-in to Finding Dory, a kind of circle-closing project for a guy who has celebrated rhinos, elephants and big electric cats in his earlier years. Piper won an Oscar just a few weeks ago. See it; it’s wonderful.

There, daughter. A hit.

For our money, though, we miss The Bears, his between-Crimson episodes side project that he started in the late ’80s with some old friends from Cincinnati. In some respects, this was the heart of Belew’s tuneful giddiness, the lead singer in a two-guitar rock band, gentle on the guitar effects and largely bereft of pyrotechnics or doomsday sonic overtones. “Pay no attention to the man behind the curtain,” went one line from their debut album, “he knows what’s best for you…”

How would that sound these days?

Hands raised at the mike, Belew would greet the audience on that tour with a friendly “grrrr…,” which was promptly returned in kind. In some ways, it was the only way we could reply to Belew; the rest of the time, the Twang Bar King speaks in foreign tongues, and all we can do is listen, and absorb, and gape a little bit at the most awesome musician in the world.