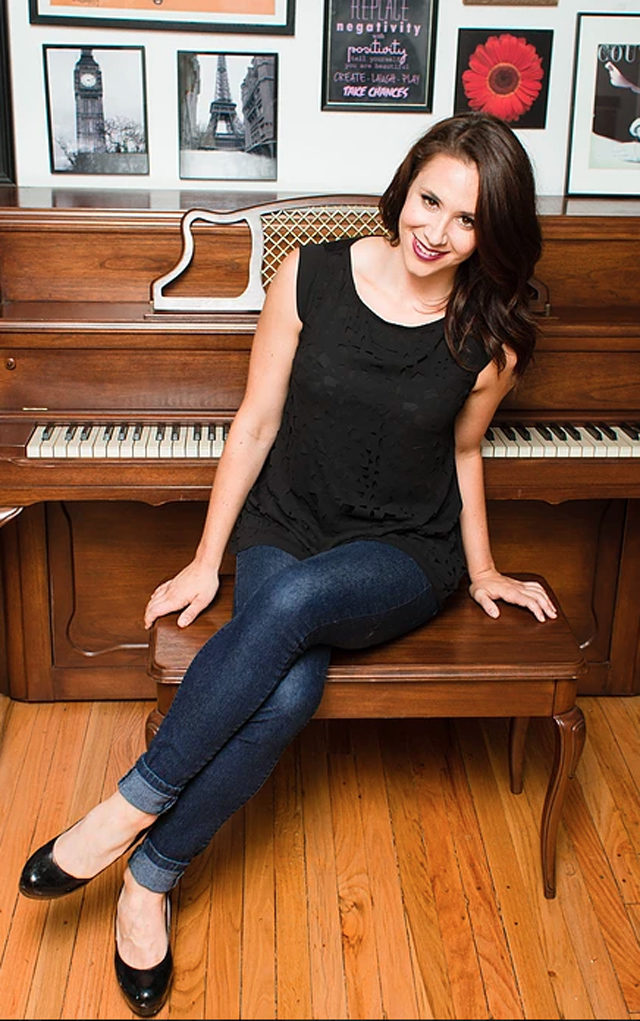 Pianist Annie Booth has to think a minute or two to recall the last time she trundled her trio up the (unbuckled) highway to play Boulder.

“Um…I think we played a trio gig at Caffé Sole like… a year ago, maybe?”

For lack of appropriate stages or audience or demographics or a combination of everything, some have characterized Boulder as something of a jazz desert. (Well, maybe that’s overstated, and for the faithful, the complaint is not particularly new. Subject for another time.) Suffice to say that the almost-30-year-old, Westminster native has been blessing the vibrant Denver jazz scene at places like Nocturne, Dazzle and Elway’s Cherry Creek for several years now. Voted Best in Denver — Jazz Category by Westword three of the last four years, recipient of the 2017 Herb Alpert Young Jazz Composers’ Award, with three full-length albums and a faithful following, Booth is one of the bright lights on the Denver scene, and why should Denver have all the fun?

But Booth is not quite a complete stranger to the People’s Republic. In spring of last year, she and a nine-piece chamber orchestra staged “Flowers of Evil,” a multi-movement suite of original music scored to the poetry of 19th century French poet Charles Baudelaire at the Dairy Arts Center. Set against woodwinds, brass, her own trio and soprano vocalist Kathryn Radakovich, Booth’s compositional gifts bloomed ecstatically, from ruminative tone poems to buoyant, one-arm-free swing passages to lithe, gentle cafe intimacies. A far cry from her day gig — trio jazz, blues and ballads and standards on a club stage — “Flowers of Evil” displays Booth’s carefully drawn and fully informed strategic ambitions, that delicate embrace between the free spirit of jazz and the discipline of a meticulously crafted ensemble. And true to her love from back in her high school days, French poetry.

Until recently, the piece was a little hard to track down online, tucked away on YouTube and unmentioned on her own site. But the entire composition, well-filmed and recorded, is now up on her site, and Booth says she’s working on getting support together to commit the piece to an album next year.

“It was a pretty big project,” she says. “I had been kind of dreaming about it for a long time, then I had the chance to go to the Banff Center in Alberta in March of 2017, be an artist-in-residence and just compose for two weeks. That was an amazing experience, and yeah, it was a lot of time and love and energy that went into it.

“There was a little bit of self-doubt, I think; it was an ensemble that I had never written for, and I had written for strings a little bit in the past (but not really), so there was just so many textures and so many colors that I had to work with. I guess I’d call it ‘chamber jazz,’ and a lot of thinking about what the evening was going to be like, what would segue into what. So it was a challenge, but that was what made it fun.”

And when did “fun” and “jazz” become mutually exclusive, anyway? Apart from her playing and complete immersion into the composer’s oeuvre (she writes everything down… everything), Booth is also a product of, and a vigorous proponent of, jazz education.  She started her jazz studies with the nonprofit Colorado Conservatory for Jazz Studies (CCJS), a program for empowering young people to explore and perform jazz music started by the acclaimed Denver jazz drummer Paul Romaine and his wife, Chris, in 1999, and went on to get a Bachelor’s of Music at University of Colorado Boulder in 2011. She is now on the CCJS Board, and actually started a program on her own for young women called SheBop.

“[Paul and Chris] just saw a need for an augmented jazz education in the area, like, more than what the kids could get in their high school programs. And a chance for kids to connect with professional musicians in the area, kind of like it was done in the old days — the master/apprentice model, which had kind of gone away because it’s kind of not OK anymore for high schoolers to hang out in smoky bars, that kind of thing.

“And it’s amazing. Over the past 20 years, hundreds of musicians have come out of the program, many have become professional jazz musicians, and even those who don’t become professionals take with them the love and appreciation for jazz music, and also the skills we learn as jazz musicians; things like improvising, learning to express yourself, work with others, be a leader, accept criticism. And probably most importantly, it’s really helped to create a strong community.”

For her part, she credits some of the masters of 50 years ago (Bill Evans, for one) as her influences, sometimes absorbing their style and technique out of chronological sequence, but one in particular stands out.

“I don’t know, maybe it’s the timing of when you hear something at a certain time in your life or in your musical development…but when I was about 16, I don’t know how I found Brad Mehldau, but I did, and at that time my listening was kind of all over the place in jazz history. Later I would have to go back and fill in the gaps, but I must have gotten a CD or something from the library from Brad Mehldau, and there was just something about it that I found really beautiful, that really spoke to me.

“It was similar to what I heard in Bill Evans’ music — some influence of classical music, inspired tonality, almost living in harmony. Creating beautiful melodies out of a rich harmonic framework. And even though I was just getting started playing jazz, I knew that was the world I wanted to live in.”

“Y’know, you hear that a lot. Jazz audiences are dying off and all that stuff. But you know, I look at… me. Someone on the ground, and a millennial, I see the music thriving, and even a generation below me, the kids are so into it, and they’re so talented. They’re soaking up all this stuff on YouTube, which was just getting off the ground when I graduated. They have all this music at their fingertips.

“And for my generation, I see a lot of young people coming out to see live jazz. They know it’s jazz. They’re not being tricked into it. (Y’know, market it as something else, then give ’em a little jazz…)

“I don’t know if ‘revival’ is the right word… but I think the music is in safe hands.”