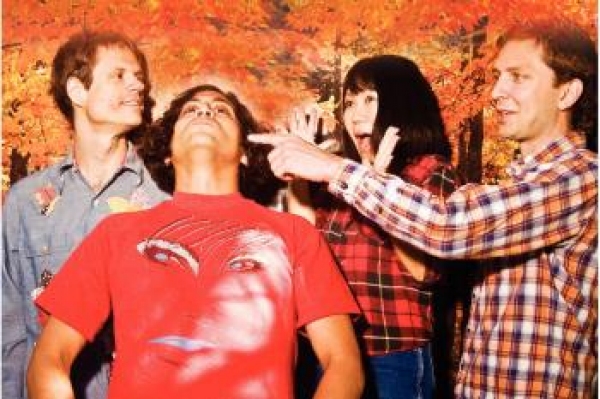 Satomi Matsuzaki, a Japanese-born, self-taught musician who moved to San Francisco from Tokyo in 1996, highlights the avant indie-rock of Deerhoof with her childlike vocals and thunderous bass guitar. From the simultaneous irreverence, innocence and brilliance of Matsuzaki’s lyrics, you’d think the tiny frontwoman would have a lot to say on stage. However, drummer Greg Saunier hilariously emerges from behind his sparse drumkit after nearly every song Deerhoof performs, towering over Matsuzaki’s microphone to tell straight-faced jokes while she giggles beside him.

There’s no method to the routine beyond expediency, according to Matsuzaki.

“Greg is speaking for me while I am taking a break from singing between songs,” she says. “Why not drummer speaks? Greg actually doesn’t like to talk on stage but we encourage him. We think his speech is funny!” Not unlike rock fans unable to warm to Sonic Youth and the Velvet Underground, some consider noise the only method to Deerhoof ’s magical madness. Based in Oakland, the cult sensation actually debuted as a duo in 1995, with the Oberlin-educated virtuoso Saunier convulsively drumming and since-departed Rob Fisk playing bass. Through wild experimentation, intense practice and heavy touring over 15 years and 10 albums, Deerhoof has evolved into one of the most interesting bands in American popular music.

Offend Maggie (2008), Deerhoof ’s triumphant return to life as a dual-guitar quintet, saw the band’s art-rock beginnings come full circle with Matsuzaki’s adorably creative lyrics — alternated between English and Japanese — tempered by 12-string psychedelia and Saunier’s spastic drums. Unlike the stripped-down and playful bomp of 2006’s Friend Opportunity — which suffered from the loss of second guitarist Chris Cohen — Offend Maggie’s enjoyable depth again proved Deerhoof worthy of the big-time opening slots the band was given by Radiohead and the Flaming Lips a few years ago.

Matsuzaki
says the band was happy to return to its customary two-guitar format by
bringing along Ed Rodriguez, an old friend of longtime Deerhoof
guitarist John Dieterich.

“[Now]
we have to feed one more person — ugh,” Matsuzaki says. “Just kidding.
It’s good to have Ed in the band. He is easygoing and can play anything.
Funny too!

“Musically, of course, better than three-piece, especially since Deerhoof writes songs that have thick harmonies. Not possible to play them live without more fingers and one more brain to throw ideas.”

The foursome is excited about its creative new release, Deerhoof vs. Evil, which Matsuzaki described to me just before it dropped on Jan. 25.

“Lots
of rhythmic variations, layers of colorful sounds and danceable album!”
she says excitedly. “You can play it at home party.”

True,
an exceptional portion of the album is playfully danceable, and the
upbeat “Superduper Rescue Heads!” could surely highlight any blockbuster
super-hero film, but that’s not the whole story.

Deerhoof has always been ambitious, but Deerhoof vs. Evil presents
perhaps the band’s most surprising experiment thus far: an LP chock
full of pop music. Here and there on previous albums, the group has
taken detours into soft-hearted passages of pleasant oddity — between
bursts of fuzzed-out dementia — but Deerhoof vs. Evil tracks such
as “Behold a Marvel in the Darkness” (with its “What is this thing
called love?” refrain) and the wholesome classical-guitar-driven “No One
Asked to Dance” are unambiguously adorable.

Even
more startling, Saunier — who has struggled with Tourette’s syndrome
and is known for his unpredictable Keith Moon-esque rhythms — spends
much of Deerhoof vs. Evil doing his best impression of Roots
drummer ?uestlove. That’s not to say the LP is remotely boring — its
combination of peculiar instrumentation, thick beats, ’80s charisma and
Matzusaki’s fresh-faced lyrics could make it the group’s breakout
release. Plus, Deerhoof is bombastic and irresistible as ever in
concert, and experimentation lies at the heart of their mission.

Over the years Deerhoof has made headlines with quirky stunts, like releasing sheet music for Offend Maggie’s “Fresh
Born” prior to the album’s release, urging fans to record their own
versions of the song before they’d heard Deerhoof ’s. But the most
memorable Deerhoof stunt wasn’t even the band’s own idea.

Milk Man, a
ballet/performance/concert conceived and performed by children and
teachers at the North Haven Community School in the fall of 2006,
juxtaposed the Who-meets-Sonic Youth music of Deerhoof ’s acclaimed 2004
album Milk Man with kiddie performance art. Although Matsuzaki’s
truly surreal lyrics — such as “Milk Man smiles to you ‘Hi’ in a nude /
this banana stuck in my arms, oh my love” — don’t necessarily seem like
a fit for elementary age kids, Deerhoof attended the show and loved it.

“The Milk Man ballet idea came from the teacher,” Matsuzaki says. “She orchestrated other teachers and some students to play the Milk Man album. She made it sound like the real album. Their arrangements sounded real similar
to [how] we sounded in the album. Impressed! 3- to 10-year-old kids
danced with surreal movement with balloons and funny props. Singing
together was so cute!” Videos of the performance are available online,
and the sheer weirdness of the spectacle makes viewing it worthwhile. As
for Deerhoof’s own shows, eccentricity is always matched with serious
musicianship and rampant fun, creating a wholesome, interesting and loud night
out. Lately, Deerhoof has transitioned to supporting bands like
Radiohead at huge venues to pleasantly packing smaller clubs and
theaters such as the Marquis, where the group plays Monday.

“It’s
hard sound-wise to play in small places,” Matsuzaki says, “but I like
intimacy aspect of small shows. Audiences seem more like friends in that
situation. Hey you all, come to my party!” Every Deerhoof concert is a
party.

Last year the group performed with Yoko Ono in Oakland and played Joy Division’s Unknown Pleasures album
in its entirety onstage in Austria with Xiu Xiu. Like fans of Phish,
Deerhoof faithful know something unexpected and special will happen at
every one of the band’s gigs.

There’s
simply no way to describe what this artful, eccentric Bay Area quartet —
which has influenced everyone from Of Montreal to Sufjan Stevens — does
without seeing it live. Not unlike Ween, Deerhoof ’s albums are
exercises in mad genius, suddenly and strangely switching styles from
track to track — but the band’s concerts feature multitudes of
head-bopping rock ’n’ roll energy. And one laugh-inducing drummer.