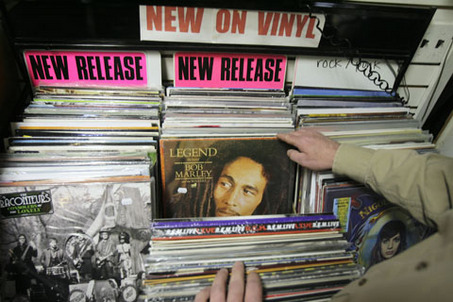 In the age of the Internet, buying an album is about as personal as checking the weather. Gone are the days of awaiting the next release of your favorite band before buying a copy at your local music store and popping a copy into your player at home.

Moments like that are why record stores around the world are hosting events to celebrate Record Store Day on Saturday, April 21.

Boulder’s record stores, Bart’s Music Shack, Absolute Vinyl and Albums on the Hill, are getting in on the action and gearing up for Saturday’s festivities.

Record Store Day started in 2007 as a way to celebrate the dwindling number of independent music shops in the U.S. Since then, the movement has spread worldwide and received support from music labels and musicians, including their ambassadors Ozzy Osbourne, Josh Homme and, this year, Iggy Pop.

“Record stores are cultural touchstones, and it’s marvelous that they’re being celebrated,” says Andy Schneidkraut, owner of Albums on the Hill. “It’s a reminder to people that it’s an experience they once enjoyed.”

Albums on the Hill will have live music and giveaways. Bart’s Music Shack will have music from bands like Springdale Quartet and Los Fear of Shrimp.

Doug Gaddy, owner of Absolute Vinyl, has planned events for the entire day that he calls “the Black Friday of record stores.” There will be kung-fu demonstrations, live painting by Anthony Moulton and live music from The Yawpers, Whiskey Blanket, The Alright Band, Monocle, Jamesons Co-Dependent Country Band and Modern Synthetic Chemistry. There will also be giveaways from Radio 1190 and local label Adventure Records.

“I try to make it special,” Gaddy says. “If people are coming out for a Black Friday-type of event, sure, it can be about commerce, but there are a lot of artists out there, and I want to turn it into a party. I’m trying to give back to the town, and remind everyone how record stores used to be before there was the Internet.”

Bands are getting in on the celebration, too. The Yawpers will not only be playing at all three Boulder record stores, but three more in Denver and Arvada — Tonic Records, Black & Read and Independent Records and Video.

”I’ve been in and out of record stores since I was younger,” says Yawpers member Nate Cook. “We want people to support record stores. They’re an important part of the community.”

Albums on the Hill has participated the last five years, and Schneidkraut says it has become his busiest day of the year. Last year, Record Store Day increased independent stores’ album sales 39 percent in the following week, according to Billboard.com. Unit sales increased by 182,000 and accounted for 41 percent of that week’s increase.

One of the major parts of the event is the hundreds of limited-edition releases that the Record Store Day organization distributes to independent stores. The editions include old and new, special tour recordings, albums with the original art and liner notes, etc.

Schneidkraut says his plan is to secure as many limited editions as he can for his customers. He has his eye on Phish’s vinyl release of “Junta,” which will only have 2,500 copies released. He’s also looking to get Widespread Panic, Animal Collective and the Black Keys, among others.

Albums on the Hill has been around for more than 35 years, and has been owned by Schneidkraut for 25. He remembers a time when record stores weren’t so sparse.

But Schneidkraut says there’s been a resurrection in interest.

Bart Stinchcomb has been in the record game since the late ’80s. He says that part of the record boost came from an emergence of DJ culture, but also because of the fact that people want to connect with music again.

“With records, you have an intimate relationship with a piece of music,” Stinchcomb says. “It’s a piece of art. It’s something Spotify and Pandora can’t offer.”