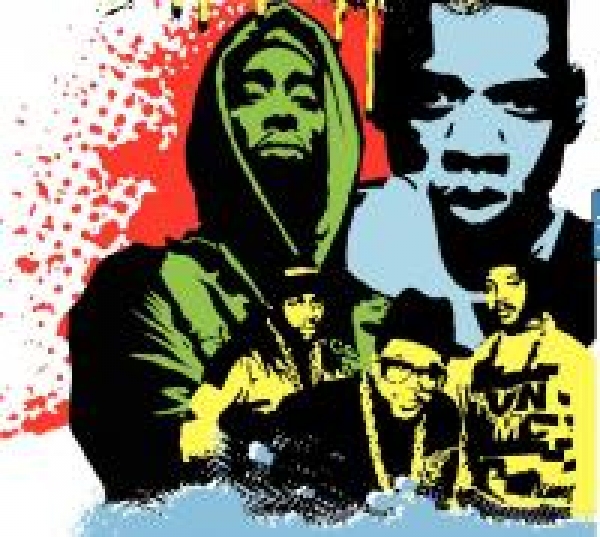 For the first decade of its existence, rap music was deemed a fad, another pop culture trend to soon fade like disco and pet rocks. After rap music defied the prediction of its demise, its musicality came into question. Was it real music? After selling billions of albums, topping radio play and dance club charts, getting Grammy recognition and having rap artists inducted into the Rock ’n’ Roll Hall of Fame, there’s no question that it is music.

Now comes into question the literary validity of a rapper’s lyrics. Are they words in poetic form entrenched in the traditions of oratory expression and story-telling or just a bunch of gibberish from people who grew up in poverty-stricken neighborhoods in America’s major cities? According to the new book, The Anthology of Rap, it may be a bit of both. Authors and professors Adam Bradley and Andrew DuBois collected the lyrics of more than 300 rap songs from across its 30-year history for The Anthology of Rap with hopes that the lyrical contributions of rap music could be recognized for their artistic integrity.

“Hip-hop doesn’t need an anthology to make it valuable,” says Bradley, an assistant professor of English at the University of Colorado at Boulder. “People have been listening to rap music and participat- ing in hip-hop culture for decades without having a lyrical bible to go to. For those of us who love the culture, we have it in our heads. You know what we mean when we say ‘I came in the door, I said it before’ or ‘visualizing the realism of life and actuality.’ Those lines just kind of pop off in our head. What we did think, though, is that rap represented a kind of cutting-edge poetry, a public poetry that manifested itself in song but was grounded in the roots of what made people create in the first place — rhythm and rhyme and the play of language. So we said we have to collect this material and preserve it; that preservation is a main component. I’ve been noticing that even being at CU, how many of the undergraduates today aren’t familiar with some of the great lyrics of the past, and these are hip-hop lovers! For a lot of my students, hip-hop begins with Tupac and Biggie in the mid-’90s.”

The idea for the book came to Bradley and DuBois while they were working in the Ph.D. program at Harvard University. Bradley, who grew up listening to hip-hop in Salt Lake City, was studying under such luminary scholars as Henry Louis Gates and Cornel West, while DuBois, whose first hip-hop concert was watching Whodini and The Fat Boys open for New Edition in Huntsville, Ala., in the early ’80s, was studying under well-known poetry critic Helen Vendler. The book has an in-depth foreword on the oral tradition of “rapping” by Gates, a comprehensive introduction on what rap music is (along with the book’s methodology), and afterwords by rappers Chuck D and Common. The book breaks down rap’s history via lyrics into four periods, from 1978 to 2010. In addition, the authors provide a brief bio of each artist featured.

“We thought it was strange that there wasn’t an anthology,” says DuBois, an associate professor of English at the University of Toronto at Scarborough. “It seems like something that would have existed 10 years ago. But nothing did exist quite like that, so we kind of talked about how there should be one. Then, about our last year of grad school, we just sat down and started to map out what a book like that should look like.”

The first thing the two rap fans did was create what they dubbed “the greatest mixtape in hip-hop history,” which featured 500 of rap music’s greatest songs, with an emphasis on lyricism. They passed the list of songs around to an advisory board of hip-hop scholars, authors, journalists and cultural critics and asked what songs they would remove or add for a lyrical anthology. The list of songs ballooned to more than 1,200. With space for only 300 songs in the book, there was a lot of cutting to do.

“The cuts were one of the most difficult things I’ve ever done in my life,” Bradley says. “It was so painful. Part of that meant deciding, are we simply not going to talk about certain things or are we going to talk about everything with mediocre attention? What we decided and ended up doing is the things we would talk about, we would talk about well. So if we give you a section on Tupac, we’re going to give you a good selection across his career; we’re going to give four or five songs, minimum. But that may mean we’d have to not talk about somebody else. We had to make some tough decisions. Also, the permissions made decisions for us. There were certain instances where we couldn’t contact copyright owners, no matter how long we tried. It was painful to pull things, especially at the very last minute, because of rights.”

Some of the items pulled because of permission issues included lyrics from well-known and respected artists like Outkast and Redman and classic hiphop songs like Queen Latifah’s “U.N.I.T.Y.” and Big Pun’s “Twinz.”

“On a personal level, out of all the groups in the book, the one that’s geographically closest to where I grew up was Outkast,” DuBois says. “And man, that was a killer [to not have them included in the book]. I felt like I had been kicked in the stomach.”

Then there was the transcription of the lyrics. It’s no secret that understanding every word a rapper says in a song can be difficult. Bradley and DuBois admit in the book’s introduction that “not even hip-hop insiders are likely to understand everything in every song.” The rigorous task of transcribing every word from all 300 songs was such a chore that they even contacted artists to confirm lyrics in certain songs. But Bradley admits that there are still some errors in the book.

“We have a website for the book, Anthologyofrap.com, where we’ll be soliciting responses from readers and corrections as well,” Bradley says. “I’ve already noticed some small errors that got in there, and we’ve spent months proofreading it. It’s just bound to happen. So we want to get the transcriptions, which we think are good, to be perfect, if possible.”

Aside from the small percentage of errors and the absence of just a few classic hip-hop tracks, The Anthology of Rap is a scholarly and thorough case for rap lyrics to be looked at with the same esteem as other literary art.

“We want them to see the historical range,” DuBois says. “That’s the purpose of having the book arranged in these chronological sections, so that you can actually see the chronological development in rap. Just to see the range and the density and the sophistication and variety of rap lyrics. There are people who have this false dichotomy in their head about ‘well to say that song lyrics are poetry is over-intellectualizing them and therefore diminishes their street credibility.’ I don’t believe that’s true. Jay-Z, in his new book, is trying to make the case that song lyrics are poetry; they’re part of the same family tree. We just want to show some of the beautiful features in it. Not just the beauty, but the harshness, too, within the historical development and poetic sophistication, density and variety.”