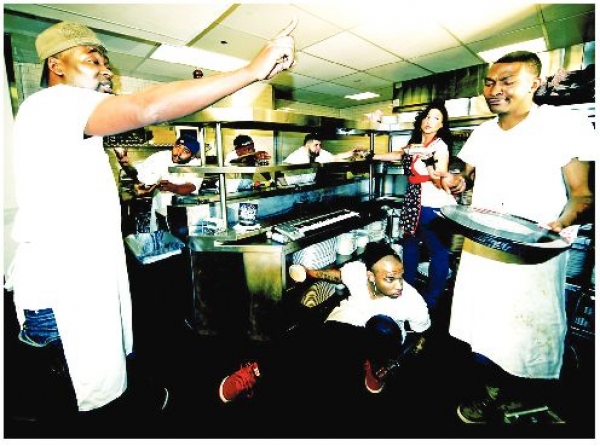 Colorado hip-hop group The foodchain have barely been together a year and a half, but they’re continually gaining notoriety. Consisting of four emcees, two producers, a DJ and a percussionist, The foodchain released their debut album, Corpses, in February, a followup to 2009’s self-titled EP. Their sound is difficult to define but can range from dealing with the stresses of life to trying to understand women over melodic, mid-tempo neck-snapping beats. Since the release of Corpses, which also features hip-hop heavyweights like Talib Kweli and Big Pooh, the crew has been wheeling and dealing to get their music out to a bigger audience. One of the biggest results of that hustle is a digital distribution and marketing deal with well-known DJ Statik Selektah’s Showoff Digital, a spin-off of the DJ’s record label Showoff Records.

“We originally had some conversations with Statik around the time Corpses dropped in February,” says Mic Coats, one of the four emcees in The foodchain. “Nothing progressed from it. We kept moving forward and entertained some distribution deals from some other areas. Then a guy that we work with, Johnny, was out in New York and happened to run into Statik. He asked how everything was with us, because he loved the music. We then revisited the conversations and we worked it out.”

The deal will give Corpses digital distribution worldwide as well as assist in marketing and promotion online, which includes song placement on radio, blogs and online magazines. It’s a one-album deal that lasts for five years that also gets their songs in the hands of Statik’s DJ networks. The crew will re-release the album through Statik’s digital label in the next few months with a bonus song.

“I just felt like their music was really dope and felt like their music wasn’t being heard as much as it should, ya know?” Statik says. “Their style reminds me of Little Brother, Slum Village and groups like that. There’s not much out there that sounds like it so it’s dope to hear. So, Showoff Digital is a way to help independent artists, like The foodchain, get their stuff all over the place like iTunes, Amazon, Rhapsody, Napster and all that.”

While The foodchain, consisting of rappers Mic Coats, C1, Champ, and F.L., producers Mass Prod and Mo Heat, and DJ Louicide, have done a decent job getting exposure for themselves, this deal takes it to another level with hopes of setting up a European audience. In the meantime, the group is preparing for their imminent coming out party. Mo Heat recently joined the crew to add depth to the in-house production team, adding a new layer to the group’s sound.

Mass Prod was the lone producer on Corpses and looks forward to what he and Mo Heat will be cooking up.

“The new album is going to be really big, we’re going to have a really big sound,” says Mass Prod, who counts hip-hop producers DJ Quik, Just Blaze and J Dilla as just a few of his many musical influences. “Me and Mo Heat aren’t just going to have my tracks on there and his tracks on there, we’re collaborating on tracks. When me and Mo get together and do music, it sounds nothing like what we do individually. We’re all excited about it.”

The addition of Mo Heat also brought a new dynamic to the group’s live show. The outfit experimented with a live band earlier this year with hopes of bringing out a different side, but the crew found the musicians they were working with couldn’t really capture The foodchain sound. Instead, they brought in drummer Alex Armstrong, had both Mo Heat and Mass Prod play live keys and DJ Louicide live on the bass keyboard.

“The band was something we always wanted to do; we just didn’t know how to piece it together,” rapper F.L. says. “Things just kind of snowballed when we created Corpses. We were getting a lot of exposure and we just wanted to develop that live set. It started off separated because of the pre-existing band, they already had their vibe and we couldn’t really gel with them. Then we just looked within ourselves and the talent that we had, that’s what brought out the sound we wanted. Truth be told, we probably could have done that from the beginning, but sometimes it just takes that struggle and determination to achieve that goal.”

And even with seven to eight fulltime members of the group, they’re able to overcome any egos and disagreements they may have. The crew consistently keeps their eyes on the greater purpose.

“We’re all really close but every now and then each individual will have their moment where somebody is just… holding their balls, ya know?” Mass Prod says. “We just let it happen, but when it’s all over we just sit down and say ‘look man you’re trippin’.’ But we’re all comfortable with it and it’s nothing like we ever have sour feelings for each other because we’re all really close. We’re like brothers.”