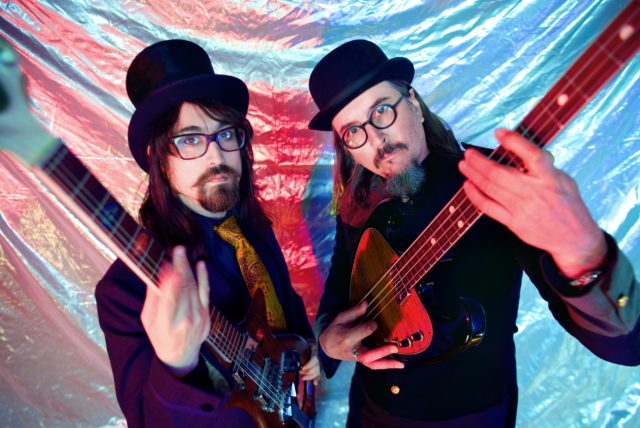 Sean Lennon didn’t expect that when his band, The Ghost Of A Sabertooth Tiger, got the opportunity to open a tour in summer 2015 for Primus it would lead to anything more than a little more exposure for his band and a chance to get to know the members of Primus.

Instead, in just a matter of months, that tour led to a new band, The Claypool Lennon Delirium, an album as that entity (the 2016 release Monolith of Phobos) and a creative partnership with the leader of Primus, Les Claypool.

Looking back now, Lennon realizes the signs of musical and personal compatibility were there from the first time he jammed with the Primus bassist/singer during some down time on that summer 2015 tour.

Claypool casually invited Lennon to what he called a “jamboree,” but when Lennon got there, Claypool was playing his bass alone.

“I went from thinking we were just going to have some kind of community drum circle to realizing it was going to be me and Les jamming in a little room, and I was kind of nervous because he was somebody I kind of looked up to when I was young,” Lennon recalls. “So I definitely was nervous. But apparently that jam was the one that sort of got me in the door because he was like, ‘Hey, you’re playing some cool stuff.’

“But I think it made sense because we both share a lot of tastes in terms of certain kinds of notes, like minor flat fives and flat nines and these kinds of notes that a lot of people try to avoid, we tend to like a lot,” he says. “So I think there was a sort of camaraderie of weirdness.”

Of course, what’s weird to one person may feel normal to the next. But it is true that both Claypool and Lennon (the son of Beatle John Lennon and Yoko Ono) have frequently been seen as a bit offbeat with their music.

Primus is known for the idiosyncratic bass work of Claypool, the quirky melodies of the group’s music and the odd characters and stories that sometimes populate the band’s lyrics.

Lennon, especially in The Ghost Of A Sabertooth Tiger, has shown a talent for accessible pop melodicism, but he’s also done his share of musical projects that were a bit off of the mainstream path, including working with Ono on a variety of her projects, doing a stint in the group Cibo Matto and the improv duo Mystical Weapons.

Looking back on the making of Monolith of Phobos, Lennon can see why his musical sensibilities blended well with Claypool’s.

“I think there was a natural chemistry between Les’ very rhythmical, rhythm-forward, kind of, like, stompy instincts and my sort of … more songwrite-y chordal instincts,” Lennon says. “And that kind of fused in a good way… I sort of felt like there was a salt and pepper balance going on in terms of what I could offer the music. ”

The music the duo made — most of the instruments on the album are played by Claypool and Lennon — sounds like a true blend of the two men behind the project.

Like Primus (as well as Claypool’s various other projects), there is an off-kilter quality to songs like “Cricket and the Genie (Movement I, The Delirium),” “Mr. Wright,” “Breath of a Salesman” and the title track. Melodies and pop hooks soften the edges, suggesting Lennon inherited some of his father’s musical gifts. The result is a sound that blends psychedelic and progressive rock elements, but is also more accessible and inviting than the jagged and jumpy music for which Claypool is known.

The Claypool Lennon Delirium toured extensively last year, and now will open two shows for Primus, May 16 at Red Rocks Amphitheatre and May 17 at Fox Theatre in Boulder.  Fans can expect to hear a good number of the songs from Monolith of Phobos, and maybe songs Claypool and Lennon have done for their other bands and projects.

Live, The Claypool Lennon Delirium will be a four piece, which Lennon says figures to give the songs a bit of a different feel in the live setting.

“Certainly it’s going to be different to the degree that we have a drummer, this guy Paul Baldi, who’s an amazing drummer, a much, much better drummer than I am,” Lennon says. “And our keyboardist, Money Mark (Mark Ramos Nishita), who’s an old friend of mine, he used to play with the Beasties (Beastie Boys). I’ve wanted to be in a band with him since I was like 18. So it’s actually kind of a dream come true to play with him, and he’s definitely got his own flavor, because Les and I played most of the stuff on the record … It’s a confluence of four people kind of really rocking out together versus me and Les overdubbing in a studio.”