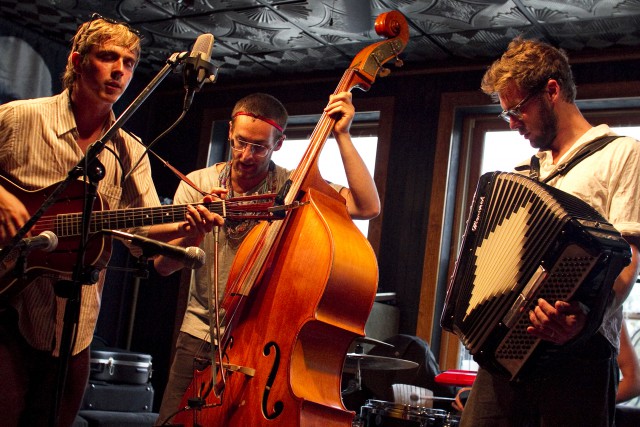 If there’s a “Colorado sound,” it might be the soft babble of a mountain stream as it trickles through grass and boulders on its way to the St. Vrain or the Gunnison or the Green. The wind whispers through trees as larks call to each other and deer graze quietly. Also, in the background, traffic on I-70.

That’s not the sound Griff Snyder has in mind.

There’s definitely a “Colorado sound” developing, Snyder says. He cites Colorado bands DeVotchKa and 16 Horsepower for developing “dark folk,” drawing on some punk and indie influences, which he says Dovekins and other Colorado bands are expanding on.

“There’s that unique thing that we aren’t being over saturated with a lot of influences,” Snyder says. “You can have space to develop your own sound.”

These days, the travel takes the form of New Belgium’s Tour de Fat, which Dovekins is playing for the second time. The group’s taking a detour to play at the Boulder Theater Sept. 8 with Paper Bird, a fellow practitioner of Snyder’s “Colorado sound.”

“The Colorado sound that’s happening is totally awesome. We’ve got so many different talented people,” says Jason Hecker, one of the facilitators of Long Spoon Records, a collective founded by members of Paper Bird and Dovekins, among others.

They don’t just share a label and a genre. The two bands have a relationship as layered and complex as their songs.

“They’re like our family,” Snyder says. “There’s just a lot of connections. We’ve lived with them; we’ve toured with them. When Dovekins started, we were really just trying to imitate Paper Bird.”

“Their music is based in the friendship,” Hecker says. “I remember when Griff was writing the first songs for Dovekins and bringing them over to the house Paper Bird and I lived in, in Boulder.”

“It’s not like L.A. or New York where there’s a band every 10 minutes and nobody cares about each other,” he says. “Everybody supports each other here.”

Dovekins member Stelth Ulvang says the groups are one big happy family. So the sensation he wants to evoke at the concert is no accident.

“The feeling that people have at weddings? That. I would love for people to experience that at live shows,” he says. “A very strong bond with everyone that’s around us.”

“We want people to have fun,” Snyder says. “There’s so many shows that suck because bands don’t know their own identities.”

Sounds simple enough, until you ask Dovekins members just what their own identities are.

“I’d come up with a really arrogant term,” Ulvang  says. “Texturalist.  “Sometimes people say, ‘You play a lot of instruments,’ and it’s awesome that they think that. I play all the instruments that one wouldn’t want to hear for an entire set: mandolin, flute, trumpet, trombone.”

Snyder, meanwhile, starts off straightforwardly: “I’m primarily a guitar player,” he says. But it’s not that easy.

“I’ll play keyboards and trombone too,” he admits after a pause. “And we all sing.”

No member of Dovekins is tied down to just one noisemaker. Blake Stepan, Laura Goldhamer, Nate Wheeler and Max Barcelow round out the band, taking up every instrument from piano to banjo to timpani.

And at the Boulder Theater, the stage will get even more crowded.

“I’m sure we’ll make that happen,” Ulvang says of members joining the other band onstage. He says both bands welcome a chance to accompany each other and play where they feel comfortable.

Snyder also says he’s excited to return to Colorado, where the band started and all the members live, though he and Ulvang say the venue might be too nice for them.

“Although, the Boulder Theater is my favorite venue.”

“We’ve had our best shows in basements,” Ulvang says. “We hype ourselves up too much sometimes at the big shows.”

But he adds that playing in Boulder with familiar faces should help the band relax.

Following the Boulder show, Dovekins and Paper Bird will rejoin the Tour de Fat Sept. 10 in Denver. Then Dovekins is off to California on the tour, carrying the torch of the “Colorado sound” and the attitude that goes with it.

“It’s about not taking ourselves too seriously,” Snyder says. “I like the Colorado sound because we’re trying to be profound, but we’ll make a joke if we’re starting to get too serious.”