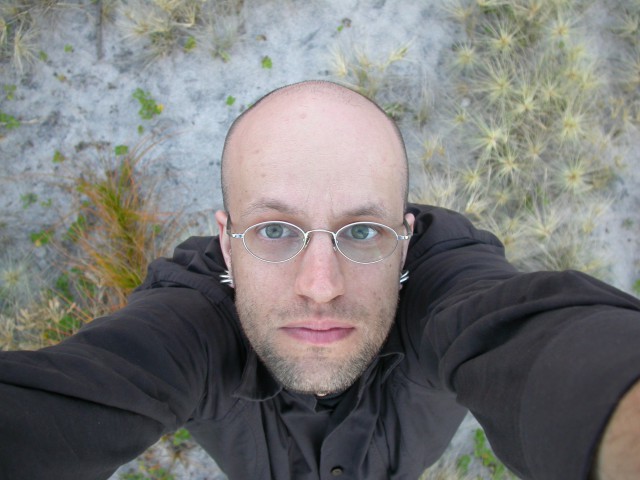 As quickly as the subgenres of electronic music become tagged and assimilated and commonly negotiated — trance, drone, dubstep, ambient, et al. — Robert Henke smears the palette and bleeds each into the others. The archetypal pioneer, plowing directly into the darkness with a worn path of linear determination pointed at a destination over the horizon, doesn’t seem to fit Henke’s remarkable, if under-publicized, route through contemporary electronica. Instead, the programmer-turned-electronic music performer cuts broadly inscribed figure eights around the points of familiarity: martial and aggressive club beats supporting banks of textured and detailed grey noise when performing as his alter-ego Monolake, or gentle and immersive tonal baths, graced by vocal samples or orphaned bits of melody, random but delicately wrought, performing as himself.

“I am probably more interested in sound as a phenomenon than in music as an abstract idea,” he explained in a 2004 interview. “Also, I am fascinated by gradually evolving structures. For me, a pulsating, repetitive beat of a club track, the music of Steve Reich, a Thomas Koener soundscape, or distant urban traffic noises are all equal sources of inspiration and delight.”

Henke was born in Munich in 1969, educated at Pottsdam, where he studied and received his degree in sound engineering (his thesis: “Modeling Nonlinear Distortions of Vinyl Records in Realtime”), and he worked for years in Germany at various studios and for a handful of theaters. His primary obsession, though, was computer-generated music, a hobby from his teen years, ever since he acquired a Roland Juno-6 synthesizer in the early 1980s.

“I have been discovering Oxygene by Jean Michel Jarre,” he told Noah Pred at pitchadjust.com in 2003, “and then I tried to get hold of every kind of electronic music I could find. This was back then mostly Vangelis, Tangerine Dream, Kraftwerk, Yello, Depeche Mode. … In 1990, I moved to Berlin and started getting interested in techno and also spent lots of time listening to academic computer music and contemporary music of the 20th century. Currently my iPod hosts a funny mixture of ‘serious’ music and electronic dance stuff.”

That Henke should wind up in Berlin, of course, closes a logical circle in the generational passing of the electronica torch — it was in Berlin, of course, right around the time Henke was born, that the earlier generation of German electronic music pioneers, especially Tangerine Dream founder Edgar Froese and drummer Klaus Schulze, were tinkering with the first portable synthesizers, interrogating their circuitry and training themselves to tame the delicate sensibilities of voltage control units and pitch modulators while lugging the machines from auditorium to club and figuring out how to keep the temperature-sensitive electronics in tune, surrounded by sweating, tripped-out German narconaut kids.

But Henke’s own obsession with the technology — disassembling it, reassembling it, programming it, extending it — eventually led to the development and marketing of Ableton Live in 1999, without question the most widely used and versatile computer-based music performance software in use today.

If you see a solo DJ or producer onstage with a laptop, it’s better than even odds that Ableton Live is running on the thing. The Ableton company was founded by Henke’s then-Monolake collaborator Gerhard Behles in 1999, and Henke signed on as chief programmer, primarily to give himself a platform to develop live performance software. Henke officially left the business end of the company some years ago to concentrate on performance, although he remains one of its primary technologists and developers. He also draws a paycheck as professor for sound design and computer music performance at the University of Arts in Berlin — not a bad gig, dividing one’s time between clubs and the classroom, if you can get it.

Henke’s other obsession is sound installations — the placement of loudspeakers driven by layered sound, around real and imagined space — that have been placed in cities from London to Stockholm, Sydney to Paris.

And if the notion that music itself, liberated from centuries-old constraints about structure and socialized to become accessible to merely the aesthetically curious in a culture handy with a laptop and quick to absorb software as an extension of personal expression, is a troubling matter (and this has been insinuated before — we heard it plenty from conservatory-trained musicians 30 years ago when the synth-pop craze created international stars out of geeky nobodies with weird hair and two-note sequencers), Henke offers no apologies. It is sound, for its own sake, which keeps him lurking on the fringes of the aesthetic.

Describing his own weakness as a musician on Ableton’s website years ago, he explains, “I cannot play an instrument. I cannot remember melodies. I cannot sing. I have bad timing. I know way too little about counterpoint. I am just someone who is addicted to sound and who under any circumstances wants to create music with electronic instruments. This is what has kept me doing it for almost 20 years.”

Henke’s appearance is one of the highlights of this year’s Communikey Festival, which is a Boulder-based interdisciplinary organization dedicated to social, cultural and ecological innovation through creative process. This year’s program features a wide range of electronic artists, several sound installations and films, including Burning Ice, the 2009 documentary chronicling a nine-day journey by artists like Robyn Hitchcock, KT Tunstall and Laurie Anderson aboard an icebreaker to the glaciers of Greenland to “to see, experience and contemplate the effects of climate change first-hand — and to begin a creative conversation with the rest of the world about one of the most important and pressing issues facing the future of humanity.”

The Bela Fleck of the ukulele