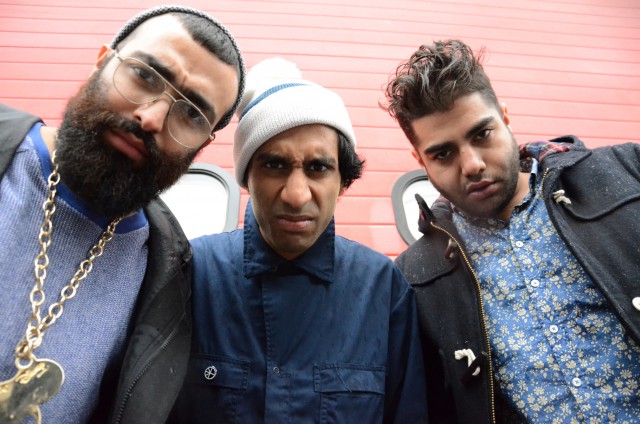 You might call them “culture warriors,” though you won’t find them armed with Bibles and picket signs. They’re not even that angry.

Olympic figure skater Phillippe Candeloro, White Castle, Seinfeld’s George Costanza, Donkey Kong Country, RapGenius.com, ’70s soft rock hit “Summer Rain” and Bollywood director Gutu Dutt are just a few of the references overflowing from their songs. Sure, you can probably discern a political perspective having to do with cultural oppression and rabid capitalism, but judging from the deep indulgence in its by-products, it sounds like something of a love/hate relationship.

“Mostly it’s just us fucking around,” says Victor Vazquez, aka Kool A.D. “A lot of the music we do, we aren’t trying to think of anything specifically. Early on we were just trying to make stuff that made each other laugh, and maybe our friends laugh. Something that would entertain ourselves and our friends.”

In many ways it’s a throwback to the playful, goofy golden-age spirit of De La Soul’s breakout ’89 debut Three Feet High and Rising, an album for which Vazquez has a lot of appreciation. There’s a pleasant self-effacing everyman quality to their rap personas, whether they’re discussing “Deep Ass Shit (You’ll Get It When You’re High)” or, on the 2008 sensation, trying to locate each other at one of fast food’s seventh wonders, the “Combination Pizza Hut and Taco Bell.”

“Basically, at the time, we were listening to shit that was like that. Ninjasonik was a huge influence at that point,” Vazquez says. “It was a wildout song. It had no specific aim to it, and I think people read into it, and saw it as being smarter than it was — probably because of the early press. The first thing written about it in the Village Voice interview, where we said some college-y shit, and so people were like, ‘These guys are smart. Plus, they did this song that did hella well, so this song in turn must be hella smart as well.’”

Not that it isn’t true. Vazquez went to Wesleyan University in Connecticut with Himanshu Suri (aka Heems) where he was Suri’s resident advisor in a “students of color for social justice”-themed dorm. They “kicked it” a bit but didn’t get together until they both moved to Brooklyn after graduation. (Vazquez is actually from San Francisco.) While at school they were friends with MGMT, who also attended Wesleyan, and for a while Vazquez followed in their footsteps with his pop band, Boy Crisis.

“It was basically aping a lot of MGMT’s shit,” he says. “They were friends of ours, so they passed our names on to some industry fools who were looking for the next shit like that.”

Boy Crisis received $100,000 on the front and another $50,000 when they delivered the first album in a four- to five-album deal. The album was shelved, though it’s out on the ’net.

“I lived off that for like a year and a half doing Das Racist on the side, and in the meantime Das Racist kind of blew up,” he says.

After starting as a duo, they brought on Suri’s high school friend, Ashok Kondabolu (aka Dapwell) as their hype man, and got down to business. The name was taken from the MTV2 sketch comedy show, Wonder Showzen, which featured a bit where a little black kid says, “That’s racist.” It was sort of an inside joke where Suri liked to scream it at the television or as an expression of outrage toward whack behavior.

“It’s not the type of name we thought would be representing our most heavily funded musical ideas,” Vazquez laughs. “It kinda sucks that the element of surprise is gone. You’re overtly political no matter what you do. I miss the subtlety of being able to be political in a project where people aren’t thinking about that straight out the gate.”

After releasing a couple of free online “mixtapes” in 2010 (Shut Up, Dude and Sit Down, Man), last September they released Relax, their proper debut. It features the entire spectrum of the Das Racist experience, from meditations on commodification (“Middle of the Cake”) to loose-limbed braggadocio with a racial undercurrent (“Rainbow in the Dark”) and old-fashioned club anthems (“Booty in the Air”).

The album has generated a lot of attention for the band, which suddenly can support its members on a few festival gigs and a college tour or two.

They’re currently looking at labels and are said to be considering signing with a major, though at the moment they’re haggling over money above and beyond record sales.

“We’re talking about signing a contract,” Vazquez says. “If that happens, we’ll put out an album, if not, we might wait a bit and just work on our solo shit and keep playing shows whenever we’re asked.”