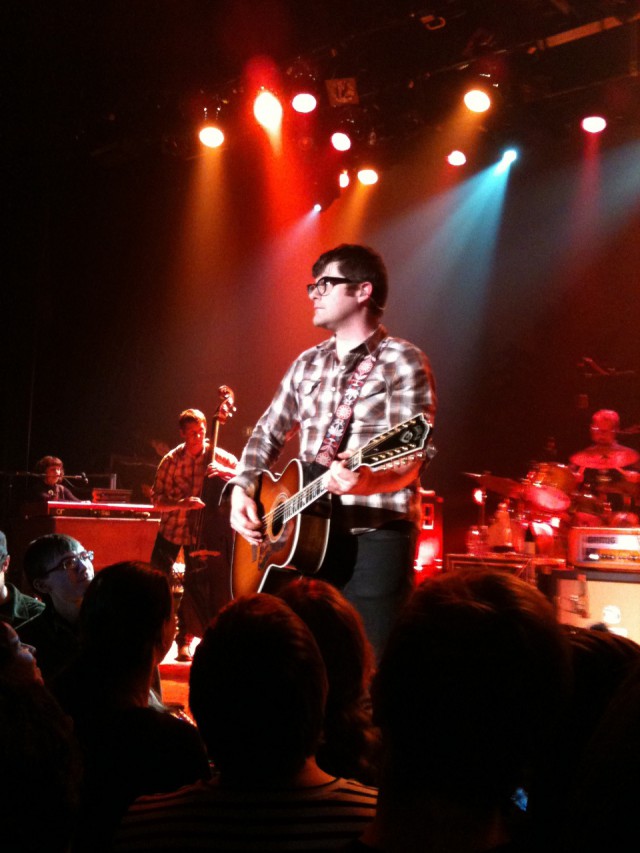 Despite their baroque, anti-war, liberal, Portlandian, eastern-European, Shakespearian, English romantic influences, The Decemberists are, at heart, an American band. Something about hating Los Angeles and longing for the life of an expatriate speaks to our national eccentricity. No matter how many accordions and fiddles they throw into the mix, they can’t escape the Springsteen connotations of their lyrics as they shout, “They’ll never catch me now / We will escape somehow.” Their front man Colin Meloy may sing of the cliffs of Dover, but his music evokes the eclectic passion that American culture has always excelled in creating. As his band played through the hits off its latest album, The King is Dead, it held tightly to its true folk-rock roots, busting out harmonicas where previously there had been none.

Wednesday night’s show was a joyous one indeed, bathed in a warm glow of neighborly companionship. A terrific opening performance by minimalist a cappella folk sirens Mountain Man opened the heart of the show.

The mayor of Portland, Sam Adams, contributed a prerecorded friendly greeting to the audience before The Decemberists took the stage and proceeded to put on quite a show.

Between Meloy’s razor-sharp wit and The Decemberists’ phenomenal feats of musical endurance (playing for nearly 30 minutes straight is a daunting task for any band, let alone a six-piece multi-instrumental ensemble), it was love at first sight. Of course, it was probably love before first sight, considering how many diehard Decemberites were in the audience.

The Decemberists are, unsurprisingly, diverse in their talents in performance. From the folk-rock anthems like “This is Why We Fight” off their latest album to the pirate-infused rollicking of “The Mariner’s Revenge,” it seems no change in sound can throw The Decemberists. They are versatile, charismatic, and predictably enjoyable regardless of the many forms their music comes in.

While his face is stoic even during his solos, and his inverted glasses make him appear to be perpetually examining a health magazine, Colin Meloy is a joker like the rest of them. His cheerful antics, coupled with those of bubbly guitarist Chris Funk, proved to be nearly as much of a crowd-pleaser as the music itself.

A satisfying night with a thoroughly good band whose marvelous approach to the American stance on music continues to fascinate, there is little more a person could ask for from a performance.