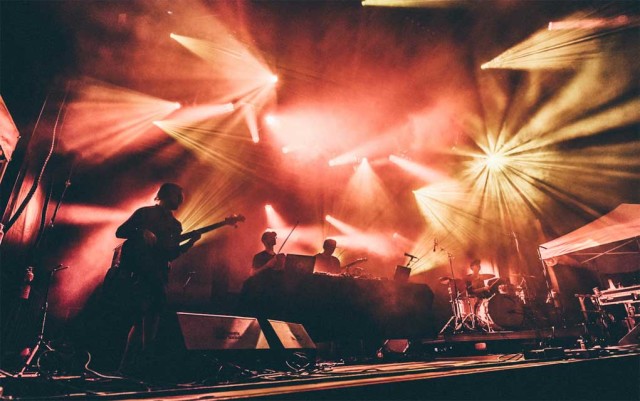 In between a few club dates and an appearance at Australia’s renowned Rainbow Serpent Festival, the electronic music producer, known by his stage alias Emancipator, and known to the Oregon DMV as Doug Appling, was chilling on a peaceful morning in Byron Bay, watching the Pacific rolling gently up on white sands. We’re pretty sure there were gulls nearby.

This was Appling’s first tour of Australia, sharing the middle bill between Pretty Lights and Kiwi artist Opiuo. It was Tuesday afternoon in Colorado, Wednesday morning in Oz, we were straddling a so-so Viber link and Appling starts off by asking, “Is it the future?”

A sunny morning in Australia, a few days before his gig at the country’s landmark electronica fest, it may well have been a glimpse of his future.

Appling’s rise on the electronic music (EM) scene has been as much a product of his studied, gently wrought downtempo tenderness as press and festival buzz. His work is characterized by an insistent appeal to organic dressings and tender melodic voicing, teasing the friction between the digital and analog synths’ dissociative opiates and murmurs of human presence. Seven Seas, the artists’ latest full-length album, is replete with touches of warmth and summoned memory, stitched with violin lines supplied by longtime collaborator Ilya Goldberg, vocals (on the title track) by scene siren Madelyn Grant and other instrumentation like a 12-string guitar and a seductive, almost mournful clarinet line on “1993.”

“So far, the response has been great; people have been describing it as an evolution of the first three albums,” Appling says of Seven Seas. “I spent a lot of time on the production quality of this record, and I think people have been hearing that.

“I’m a pretty meticulous worker. A lot of times, 90 percent of the track is made in an initial wave of creativity, but I’m pretty meticulous about dialing everything in for the last 10 percent. … It’s coloring in between the lines, like an artist who draws the painting in pencil first on the canvas, and then spends a long time fleshing out the colors.”

If EM has been derided by its skeptics as being ultimately sterile and bound to club aesthetics, younger practitioners like Appling freely avail themselves to simmer in non-mechanized sonorities.

“I laced the album with various field recordings: a hailstorm on my roof in Portland, cicadas in the jungle in Costa Rica, prairie winds. Stuff like that.

“But you’re right, the overall goal of making electronic music is to figure out ways to get more human feeling, breathe soul and life, into what are essentially digital building blocks. Like playing with Legos of visual sound. So I’m constantly trying to figure out new ways to program and record human elements into the digital programming that I really enjoy.”

Born and raised in Virginia to musical parents, Appling now lives and works in Portland. He spent his earliest years playing violin, taking up drums and guitar while playing in punk bands, then jam bands in college. He also nurtured a side interest in EM programming sparked by video game music. Eventually abandoning the live band thing altogether, he released his first recording Soon It Will Be Cold Enough, on MySpace in 2006. A Japanese label picked up the album and with the help of a sportswear sponsor, Appling toured Japan a couple of years later.

Appling says that his background as a live-instrument musician before his foray into EM is really an essential piece of training. (And, of course, like many EM artists, Appling has essentially returned part-time to the live band format as a side project — he brings a five-piece band as Emancipator Ensemble to the Boulder Theater.)

“Oh, absolutely, 100 percent. You can’t replace years and years of studying and dedicated practice time. It’s going to filter through into the music,” he says. “Just as someone who is just picking up music and writing intuitively just based on their ear, they can make great music too, but there’s going to be an element of refinement that might be missing. I’m happy to work with people who have spent years practicing their craft, they really bring that professionalism.”

We noted that Toby Marks, the artist known as Banco de Gaia, one of England’s most essential EM artists of the early and mid-’90s, recently released a 20th anniversary edition of Last Train to Lhasa, arguably one of the decade’s genuine EM game changers. We wondered if Appling, just now embarking on his second decade as a recording artist, could envision dipping into his earliest catalog sometime down the road. Remixes are fine as variations, but EM moves and evolves, sounds and beats and textures lend themselves inescapably to short shelf lives and testimonies to the here and now. Can it have a memory also?

“It’s funny you mention that, there’s a few tracks from the era of Soon It Will Be Cold Enough that I never actually released that I’m currently reworking and breathing life into. … I’m going back and producing some of the loops and samples from that era. More orchestral, wintry kinda stuff,” he says.

“I see the scene is constantly evolving, it’s impossible to try and keep up with whatever is most popular. And if you try to do that, you’re always going to be a step behind.”