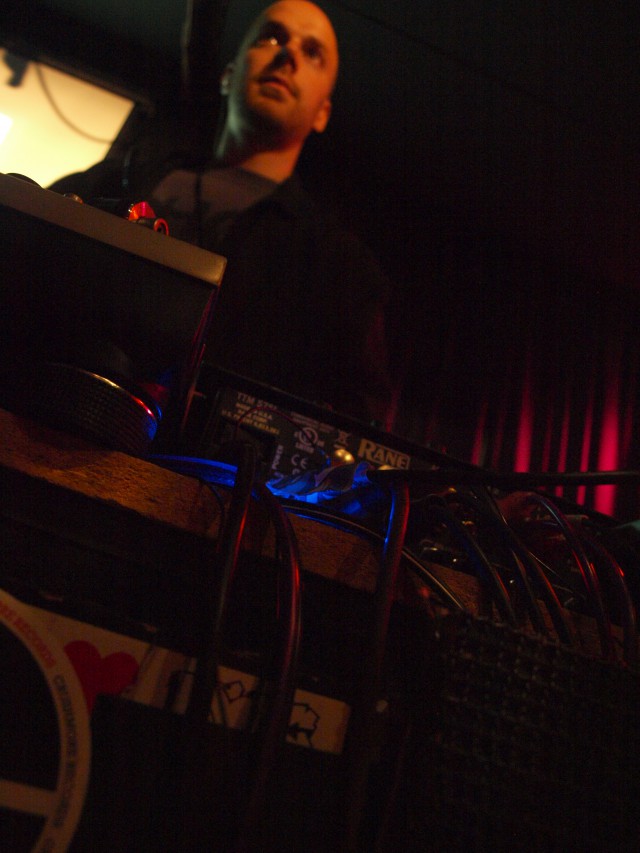 “Where I grew up, it was a lot more culturally diverse than Denver, so there was a lot of racial tension,” says Chris Karns about growing up in Ft. Wayne, Ind. “So there were a lot of white kids in my neighborhood that would pick on me for listening to rap music.”

Karns is known worldwide as DJ Vajra and is considered one of the best DJs to scratch a record in the last 10 years. He discovered hip-hop music in the mid-80s as a tween watching Yo! MTV Raps after school and on Saturday mornings. He would then go to K-Mart and buy hip-hop compilation albums like Kool Rap and the Rapmasters series, privately learning about the culture he would become so immersed in later on in life. But if the neighborhood kids weren’t enough, his parents weren’t too enthusiastic on his musical choices, either.

“They hated it. They hated it so much,” Karns says. “My parents would listen to all the crazy evangelists talking about the music. They would tell me, ‘You know, the Beastie Boys got their name because of beastiality!’ Or they would say, ‘Prince is for Prince of Darkness!’ ‘Uh, no, it’s actually his birth name, mom.’ They didn’t want me to listen to it in their house or their home, so I would have to go out and buy tapes and make copies, then hide all the copies. I always had to make extra copies of everything just in case my parents took my original away.”

Although Karns spent a considerable amount of his youth and teens playing around on turntables and pretending to host a radio show, he didn’t consider DJing anything more than just playing a record with a bit of scratching.

He was wrapped up in
athletics, playing soccer and basketball, even though he had a small
setup with two used turntables and a mixer. But to him, it was just
something to play around with.

“I was really just doing it for fun at that point,” he says. “I knew that
I wanted to learn how to scratch and how to [beat] juggle but I just
didn’t know what for.”

It wasn’t until he moved to Colorado in 1996 at age 17 that he looked at DJing from a different perspective — the DJ battle.

There
are several types of DJs: a radio DJ, who selects the music to
broadcast over the airwaves; a club/bar DJ, who selects and mixes the
soundtrack of an evening out; and a turntablist, a DJ who uses the
turntable as an instrument to create new sounds by scratching and
manipulating the tempo and volume between two records (known as “beat
juggling”). A DJ battle consists of turntablists going head-to-head,
showcasing their skills, and competing sometimes for money but mostly
for credibility and bragging rights.

Karns, who was honing his turntable skills for a couple of years by then, attended the event.

“A
lot of my friends were like, ‘You should enter, you should enter,’ but
no way, I was way too scared!” Karns says. “I had never been to a
battle or even considered battling before. So I went to the battle and
I thought, ‘I wouldn’t have been the worst person here.’ So I started
entering battles whenever they happened.”

It
didn’t take too long for Karns to get the DJ Vajra name buzzing around.
He sharpened up his scratching, cleaned up his beat juggling, and
tightened up his allaround routine at home and various events.

“He’s
one of the best turntablists in the world and very influential in my
career,” says DJ Chonz, KS107.5 radio personality and probably the most
wellknown DJ in Colorado. “I may have influenced some DJs and
introduced them to turntablism with some cutting and routines and stuff
they never heard, but Vajra took it to the next level. There came a
point where I knew that I couldn’t keep up with him. That was a turning
point for my career, because there’s no way in hell I’m going to keep
up with the turntablist scene if this is what’s next. I had to be realwith myself, and I chose a whole different direction with my DJ career.”

A
DJ would have to be pretty darn good to make one of Colorado’s most
popular DJs switch gears mid-career. But that’s how good DJ Vajra is.
Although second is the highest he ever placed at the U.S. finals, he is
recognized as one of the country’s best turntablists because of his
consistency and multiple finals appearances.

In
2008, the DMC World Championships asked Karns to judge the World Finals
in London, an honor usually bestowed upon past world champion DJs.

He
even scored an endorsement deal with Rane, a company that specializes
in a variety of DJ hardware and software, to promote current product
and test out future releases.

In
the last several years, however, Karns moved away from battling and
turntablism to concentrate on making money through club gigs and
appearances (he spins at ´Round Midnight every Friday in Boulder and
will be the halftime entertainment for the Denver Nuggets’ Feb. 9 home
game) and his new passion — music production.

“I
was always curious about it,” Karns says. “I would work with different
people and see how they do it and I would goof around with it, but at
that time I really wanted to stay completely focused on DJing.”

But when Karns was hired as the tour DJ for Colorado-bred hip-hop group The Procussions,
he found a lot of downtime trekking across Europe and Japan. He
previously took a class on how to produce using Reason music production
software, dabbled with it a bit, and became obsessed.

“I
would record tons of samples before I went on tour, then I would just
sit in the backseat of the car every single day, or in the hotel and
just make beats,” he says. “I was so stupid because I didn’t go
sightseeing or anything.”

The
hard work seems to be paying off. Karns made his debut as a producer at
this year’s Red Bull Big Tune, a hiphop music production competition,
and surprised the crowd with solid, quality beats. He didn’t place in
the competition, but made a place for himself among the list of
talented Colorado hiphop producers. Karns has already produced an
entire album with underground rapper Othello, The Required Taste, which
is set to hit store shelves this spring. His next project will be a DJ
Shadow-esque instrumental album that he hopes to release soon after the
Othello collaboration drops.

“I’m
still learning,” Karns says. “It’s like every single day I work on
production and I learn something new. It’s a constant learning and
building process, but it’s so much fun!” But will he battle again? “Who
knows, I could battle again someday, it’s not outside the realm of
possibilities,” he says.