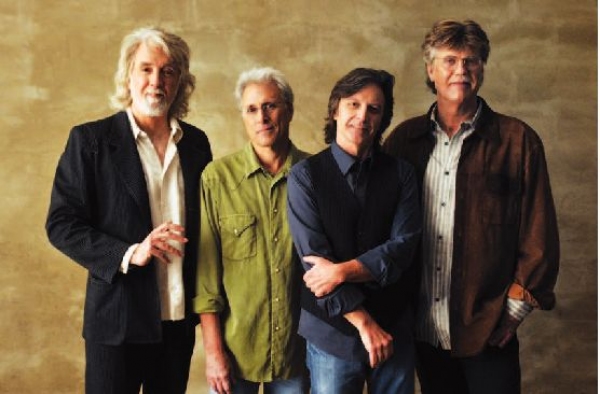 The members of the Nitty Gritty Dirt Band make up one of those musical ensembles that has always defied category. For hyphen-happy reviewers, there never seemed to be enough dashes to capture the band’s ever-evolving essence.

Together since 1966, one year they’d be “folk-rock,” the next, “country-folk-bluegrass.” These days, most have found it easiest to simply wrap the definitive Dirt Band style with the catch-all “roots music,” which seems appropriate for a band that has dipped into as many genres as it has generations of fans. Whether you know them from their heavily rotated 1970s smash hit, “Mr. Bojangles,” or the 1980s country chart-busters, “Modern Day Romance” and “Fishin’ in the Dark,” the Dirt Band has easily earned its esteemed position as a major shareholder of American music history. After many personnel changes over the years, today the core Dirt Band — a quartet now — features original founders Jeff Hanna (guitar) and Jimmie Fadden (drums), along with longtime alums John McEuen (banjo/mandolin, etc.) and Bob Carpenter (piano/keyboard).

“Doing Bonnaroo earlier this month was an amazing experience,” Hanna says. “Our set was between Hot Rize and Steve Martin. The festival mack daddies are Bonnaroo and Coachella. Nowadays you get people who are rabid music fans — it doesn’t matter if you’re bluegrass or folk or metal or hip-hop. I mean, Jay-Z and Stevie Wonder, Jeff Beck and John Fogerty, Kings of Leon and us. We all played the same festival. It had been a while since we played for that young of a crowd, and they seemed to know our music, which was encouraging.”

Steve Martin at Bonnaroo? “He’s a serious cat on the banjo,” says Hanna. “He’s deadly, deadly serious about it.” In fact, Bonnaroo was a homecoming of sorts for both the comedian and members of the Dirt Band. Back in the late ’70s — under the name The Toot Uncommons — the Nitty Gritty Dirt Band was Martin’s studio backup band for the recording of “King Tut.” More recently, multi-instrumentalist McEuen masterminded the production of Martin’s 2009 Grammy-winning bluegrass album The Crow.

“We were really tight back in the ’70s,” says Hanna of Martin. “He was our opening act for a couple of years on the road, and he had to quit opening for rock bands because it was a hostile audience. But it allowed him to really develop his thing, and at that point he became this massive comedy star.”

The Dirt Band was indie before indie was in, and these days, both next-generation fans and younger musicians are grabbing hold of the music after discovering the Dirt Band’s more understated innovations and pioneering achievements, which are now earning them their long-coming icon status. Among other things, the Nitty Gritty Dirt Band was one of the first to explore the concept of guest star compilations with its ground-breaking 1972 triple-album, Will the Circle Be Unbroken, which featured an all-star cast of mostly bluegrass stalwarts including Doc Watson, Vassar Clements, Mother Maybelle Carter, Roy Acuff, Earl Scruggs and Jimmy Martin, among others.

“There’s so much more of that now than there was in 1970 when we recorded that album,” says Hanna about the guest musician phenomenon. “You didn’t see a lot of people sitting in back then. Now, it’s kind of an everyday occurrence.”

But it still wasn’t an everyday occurrence in the late ’80s. So successful was the first effort that in 1989 the band released Will the Circle Be Unbroken: Volume Two, this time leaning harder toward country with Johnny Cash, Emmylou Harris, Ricky Skaggs, Levon Helm, John Hiatt, John Prine and many others. Like its predecessor, Volume Two spun heads in the industry as the Dirt Band garnered some well-earned critical acclaim.

Twenty years later, the Dirt Band’s biggest change has been the collective experience of its members, and it really shows in the new album, Speed of Life — their first studio effort in five years. Guest musicians include Glenn Worf and Richard Bennett from Mark Knopfler’s band. And of the disc’s 13 songs, 11 of them are originals written by musicians performing on the record, while two are covers: jug-band-style renditions of Stealers Wheel’s “Stuck in the Middle” and Canned Heat’s “Going Up The Country.” Produced by George Massenberg (who produced Little Feat, Emmylou Harris and others) and Jon Randall Stewart (of Nash Ramblers), the album was cut in Massenberg’s Blackbird Studio C, which was designed to capture the live performance sound. From the tight professional polish of what would be an otherwise loose jug-band sound, you can tell immediately that Massenberg demanded blood from these veteran musicians. The result? Classic Dirt, with four seasoned musicians running their country-folk-bluegrassrock roots through a filter of modern technology.

Which is exactly what you can expect at the show.