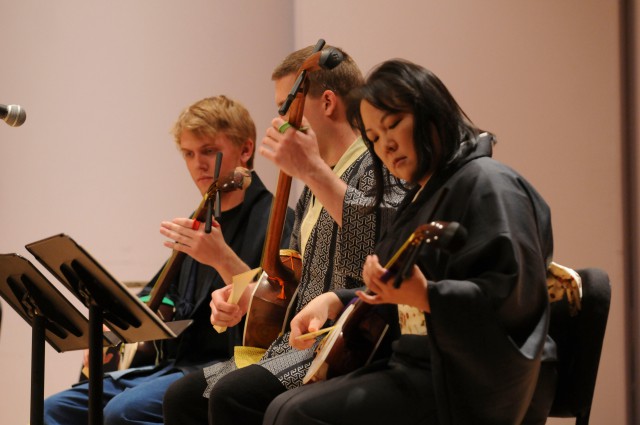 The University of Colorado College of Music won’t quite take you around the world in 80 minutes, but in one concert of that length, they can take you into musical cultures from the other side of the globe.

The College of Music offers several world music ensembles, giving students the opportunity to learn a different musical culture from the inside. In addition to the Japanese and Balinese ensembles, there is West African Highlife ensemble, which will perform Saturday at 7:30 p.m., also in Grusin Hall; and in the spring semester there will be a Mexican Mariachi band.

“Japanese music is all based on sung poetry,” Keister explains. “That’s really the essence of it, whether it’s vocal music or [instrumental] classical music.” The 14 CU students in the ensemble will sing and perform on the shamisen, a three-stringed lute; the shinobue, a side-blown flute; Japanese taiko drums; and other drums.

The program will feature folk and work songs from several areas of Japan, including “Bamboo stick song” from central Japan, a 19th-century dance song titled “Silk Maiden” and “Soran Song” from the northern island of Hokkaido. The ensemble will also perform a sequence of pieces for taiko drum and flute ensemble. This “Masquerade Medley” will be presented as a mini-play by Itasaka-Keister with masked groups of animals and demons.

The gamelan is a traditional orchestra common in villages on the islands of Bali and Java. It consists of hanging gongs and instruments that are something like xylophones, with resonant metal chimes for the individual notes. The group is led by a drummer, which in this case will be I Made Lasmawan, a Balinese master musician who lives in Colorado and teaches the gamelan at CU and other schools on the Front Range.

While the instruments are somewhat standardized, each gamelan is unique in other ways.

“No two gamelans are tuned exactly the same,” Keister explains. “There’s regional differences, and when you go from one village to another, the tuning might be different.”

CU started the gamelan classes around 1998 when the instruments were purchased for the university with funds from the chancellor’s office and the College of Music. The CU gamelan, which has the name “Gamelan Angklung Genta Kencana” (Holy golden sound), was created specifically for the university. Because music making is part of spiritual practice in Bali, each gamelan is considered sacred.

World Music concerts provide the audiences with a fascinating glimpse into unfamiliar musical cultures, but Keister is clear that the purpose is more than offering an exotic entertainment. The real focus is on the education of CU students.

“What’s really interesting about the ensembles is the sort of cultural differences that students encounter,” he says. “That’s really important [because] the kids are here to get a broad education about the world, and the world music ensembles are one great way for them to do it, without sitting in class and taking notes but experiencing it through activities.”

Keister is also aware of the danger of dabbling in another culture without appreciating its essence.

“You have to avoid playing too lightly with another culture,” he says. “Students who only know certain ways of being musical are suddenly exposed to something totally, totally different. And it’s not so much that they’re appropriating the culture, but that culture is appropriating them. …

“The student has to completely rethink their approach to music.”

Keister points to the Japanese ensemble as an example of this rethinking.

“Students think that music is about expression, and that is not at all what it’s about from a Japanese perspective,” he says. “It’s about perfect form, and making harmony among people, and the way you create that harmony by being a good neighbor. That exposes the students to something new.”

By all means, come to the concert. Hear some intriguing and unfamiliar music. But you should also be mindful of the deeper culture that lies beyond the sounds, and the ways the students on stage are broadening their experience of the world.