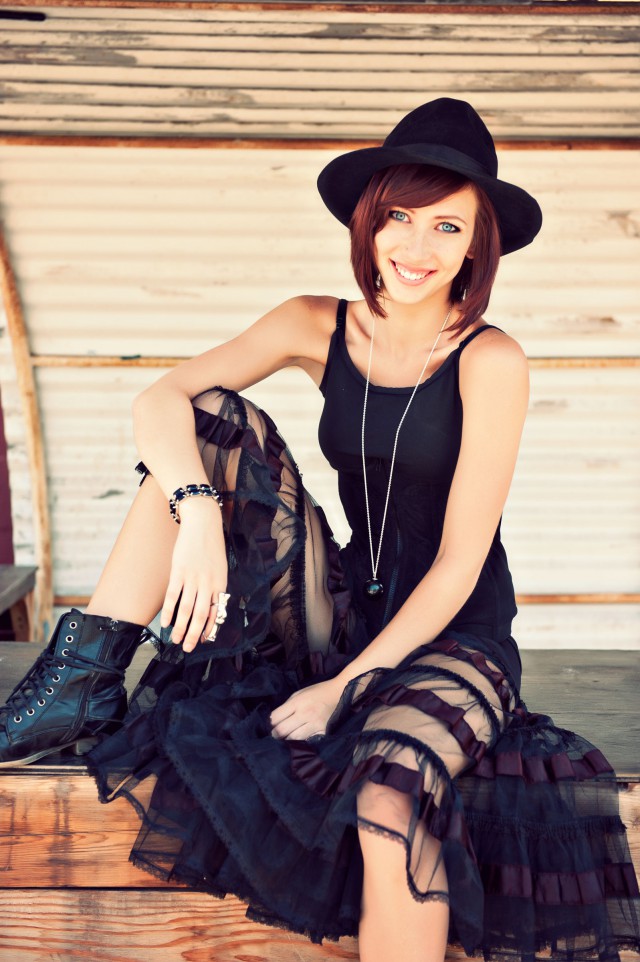 The arts, and more specifically music, is sort of a family business for Lindsey Saunders.

“My dad plays guitar, and taught me how to play,” she says. “Basically everyone on my dad’s side is a musician. One aunt is an opera and jazz singer, another is a music teacher, and then both my dad and his twin brother grew up playing music, so it runs in the family, I guess.”

The local singer-songwriter’s father must have been a very good teacher, because she is already getting a solid footing in the music world despite being only a few years removed from high school. Her debut EP, Nothing Normal, was released at the end of 2012 and this led to her performing across the country, including at SXSW, the CMJ Music Marathon and some showcase slots at the Sundance Film Festival. And back in May, Taylor Guitars made her a member of their Artist Partnership Program. Not bad for a first time around the block.

Normal showcased Saunders’ chops on the guitar on folk pop tracks like “Change My Mind” and the country-tinged “Take Me Out,” and rock and soul numbers like “Make or Break Us” — as well as “On Your Way,” a song she posted a video of to her Facebook page a few years ago — proof she’s got some powerful pipes as well. So when the time came to record a follow-up, she did what any genuine artist would do: She threw everybody a curve ball and recorded an instrumental EP of tracks to be used in conjunction with a piece that a modern dance troupe in Chicago would be performing.

“My cousin [Catherine Tiso] is a modern dance choreographer and she knows I make music,” Saunders says. “Most people only know about my pop [songs], and not my instrumental work, but I have been writing a lot of instrumentals. She heard some stuff I’d written for friends for fun, and asked if I’d be interested in writing music for a modern dance piece she was working on. I was definitely willing to do that.”

And thus, the seeds were planted for what would ultimately become Miles Before Sleep. The four-song EP — which Saunders released in October and has been touring on since — acts as a companion piece to Tiso’s work “Paths Diverge,” which draws its inspiration from the classic Robert Frost poem, “The Road Not Taken.” “Task” starts off with a brisk, driving electric guitar to accentuate the feeling of having a task placed before you and diving into it with excitement and energy, and then “Decision” uses an up-and-down pace, complex chords and lush guitar to mirror the moments of fear, uncertainty and ultimately nervous energy that come from making a decision. Somber notes and a more introspective tone guide “Questioning” before the EP culminates with the calm, aptly titled finale “Acceptance.” The writing process was different for Saunders this time around because the parameters and her mindset had to be completely different, but she proved to be up for the challenge.

“Any time you’re doing an instrumental piece, you have a lot more freedom to do whatever you like, creatively,” says Saunders. “Most of the time when I write music for myself, it’s pop music and there’s a lot of structure to that, a lot of rules that maybe you can break but probably shouldn’t break. So in that respect, [writing Miles Before Sleep] was a lot different and a lot more fun.”

So while Saunders seems to have enjoyed making this EP a lot, she has learned a lot about herself too.

“I think I am a little more resilient than I first thought I was,” Saunders says and laughs. “That goes back to the concept of the EP: It’s about choosing more of a nontraditional way of life, versus something that everybody else is doing. You’re taking the road less traveled by. Making the EP was a risk and in a lot of ways the music is just reflecting on my decision to be a musician because I decided to do this right out of high school. I gave university a rain check and decided to go for it.”

Passing up a more traditional education in favor of getting an education in pursuing her dreams: that certainly qualifies as taking the road less traveled.