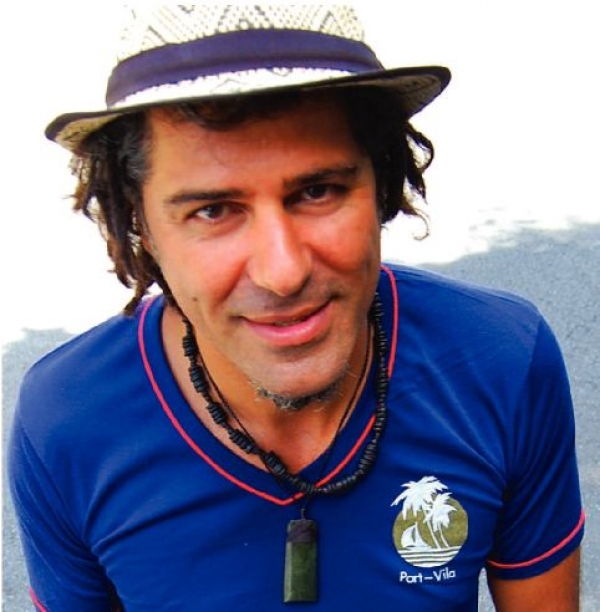 But he loves doing his own thing, too. And fresh off the 2009 release of his first-ever solo record Planet Juice, which finds the Malta-born musician playing guitar and singing on upbeat, danceable reggae tunes, Bomba is breaking from the trio’s touring schedule to come to the Boulder Draft House for an improvised night of music backed by local reggae players The Rude Boys.

But if the prospect of playing an unrehearsed gig at a bar he’s never been to with players he’s never met before intimidates him, Bomba doesn’t let on. After talking to him, you end up thinking that he wouldn’t have it any other way.

“Well, we’re not going to be practicing,” Bomba says in a smooth Aussie lilt when asked when he would make time to come practice with his one-night band. “I like to keep the magic on stage. I like to make it as though it’s kind of art talking, a creation in progress, and that’s sort of … eyes open, ears open, kind of tuned in to what’s happening at the moment. And that’s actually part of the joy of doing it. I do this stuff all around the world, and it’s fantastic, the things that just sort of happen out of the blue. You all kind of find the same vision.”

It’s an organic approach to music, for sure. But it also requires a mastery of the designated genre only years of tireless playing can achieve. Plus, a personal philosophy of music as not just a tightly controlled, computerized reproduction of notes on paper but as an improvised, adaptable organism.

“I can usually tell within the first five minutes of having a conversation with someone if we’ll be on the same wavelength,” Bomba says. “It’s not a situation like, let’s see how fast I can play. It’s all about the music. And reggae, especially, is quite kind of simple in its form; it makes it beautiful, kind of sublime, the ingredients are simple.

“It’s a community. A lot about this kind of music is that it’s not about the individual; it’s about creating this uplifting and positive spirit. That’s kind of what I’m about.”

There was an anythinggoes spirit to the whole process of planning the show.

Bomba was playing at a place called the Astra Lodge in Falls Creek, Australia, when several blokes approached him, saying they loved his music, and told him they wanted to book him some gigs in Colorado. The dates ended up falling through due to Bomba’s already busy schedule, but eventually somebody floated the idea of playing at the Draft House, and a guy involved with the John Butler Trio tour recommended he call The Rude Boys.

“I made a phone call, and we talked over the phone, and it all flowed very naturally,” Bomba says. “I love when that stuff happens.”

He says he’ll play guitar and sing when he’s not drumming at the Draft House gig and that there should be a welcoming and loose feel for anyone with a horn who wishes to come on stage. He expects some friends of The Rude Boys to step in for a few tunes throughout the night.

“All musicians are welcome, you know, just to get up and play on a horn, a flute or a violin. It’s all very much communal. One of the things I think I do well is orchestrate and organize things. It’s not just a shambles. There’s a good sense of order about it. But it’s all about fun, really. You know, at the end of the day, my motto is love and happiness.”

Things are going well for Bomba. Freed from obligations to his other projects in Australia, which include a 10-piece ska orchestra and a host of smaller bands, he feels like he’s finally free to make music with the John Butler Trio (Bomba and Butler had toured as a duo before recording the 2010 JBT release April Uprising), and he’s enjoying the blazing chemistry the band has developed. “We’re on this particular adventure, you know. It’s a beautiful thing. I was able to record the album and able to tour,” he says. “I just had a fantastic night playing on the beach in Malta where I was born, and when I got back to Australia for a break, I played with [my band] Bomba and the other bands I’ve got. … I’m kind of enjoying the journey, at the moment. I feel like I’m in a nice position.”