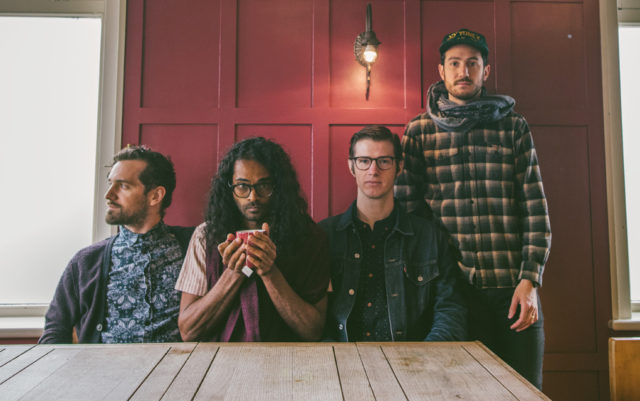 Watching Darlingside perform is reminiscent of seeing four college buddies — intellectual and talented as they are — hanging out, cracking jokes and making each other laugh, sometimes even more than the audience.

Then they begin to play, and the four voices meld together in rich harmony as all of them cluster around a single microphone. What comes out is mesmerizing: a combination of guitar, bass, mandolin, sometimes banjo and sometimes cello — but never drums — with vocals taking center stage.

There really is no front man leading the show; no personality takes precedence over the others. From the stage to the recording studio, the guys in Darlingside are friends first, bandmates second.

Named after writing advice they heard from a college professor, “kill your darlings,” Darlingside is made up of members Auyon Mukharji on mandolin, bassist Dave Senft, “effervescent cellist” (as Mukharji puts it) Harris Paseltiner, and guitarist and banjo player Don Mitchell. The quartet recently released their latest album, Extralife, a compilation of songs written over the past decade of making music together.

It started at Williams College in Western Massachusetts when Mukharji and Senft were assigned freshman year roommates — a “complete happenstance,” Mukharji says. They then met Paseltiner and Mitchell while singing in an a capella group, and somewhere along the way picked up a drummer to accompany them as they started performing as a more traditional indie rock band with musicians sprinkled throughout the stage, listening to each other through monitors. When the drummer, who is still a good friend, left the group in 2013, the group decided to embrace the change, quickly becoming a four-piece folksy Americana band overnight.

“At the same time [the drummer] was deciding that the touring life was just not for him, we were all talking about exploring more acoustic and folkier textures,” Mukharji says. “It now feels inevitable but at the time it was just like, ‘Well, maybe we’ll try this.’”

Now, it’s hard to imagine the four members doing anything but performing shoulder to shoulder, sans drums, sharing the mic with the a capella influences readily apparent.

“We like singing close together,” Mukharji says. “It’s nice to be able to hear a person’s voice as opposed to their voice through a speaker. Singing in a room together is just the way that we’ve practiced from the start as a band.”

Working democratically is also something Darlingside has done from the start, considering all ideas and opinions before settling on the final outcome.

When the idea for a song comes along, one member becomes its “steward,” messing with lyrics, melodies and arrangements before bringing it back to the group for review. Sometimes that one person will oversee the process the entire way through, others times a song will cycle through a few different stewards before it’s complete.

“It’s an incredibly slow-moving process but one that we all have faith in, and I think that stems from a lot of mutual trust and respect,” Mukharji says. “There’s a faith that what all of us like and love together is going to be stronger than what any one of us would like and produce on our own.”

It can take years to finish a song, Mukharji admits, although that’s “less a reflection of how long it takes us to write a song and more one of the fact that we have a lot of stuff brewing.”

Ideas can sit in nascent forms in notebooks and voice memos for a while before they ever make it to an album. Take the lead single of Extralife, for example. “Eschaton” was one of the first melodies the band came up with way back in 2008.

“That is one of the greatest departures from the music we were making at that point,” Mukharji says. “Its form a decade ago was just a happy folk tune, but as we pulled it back out and reworked it, it became what it is now.”

Energetic and poppy, the song explores the end of the world, with the upbeat chorus, “No matter what we’ve been/We are the upshot now.” Although the band didn’t set out with a specific theme or overarching goal in mind, Extralife is an exploration of a potentially dystopian future, as the band wrote the album throughout their tour of the country during much of 2016.

“The fact that we ended up writing a lot about the present and the future more so than the past is very much a reflection of what we were thinking about and talking about,” Mukharji says. Still, the album is void of any overarching political sentiment or specific demands.

“Our role is asking questions and putting ideas out there,” Mukharji continues. That’s “where our heads were at, more so than this is wrong, this is bad, this needs to change.”

The result leaves room in the music for the listener to engage with the band, much like the friends leave space for each other in the songwriting process. But that doesn’t mean uniformity or consensus is the result.

“Disagreement is the space that we live in,” Mukharji says. “But that is a healthy thing, or at least we view it as that.”