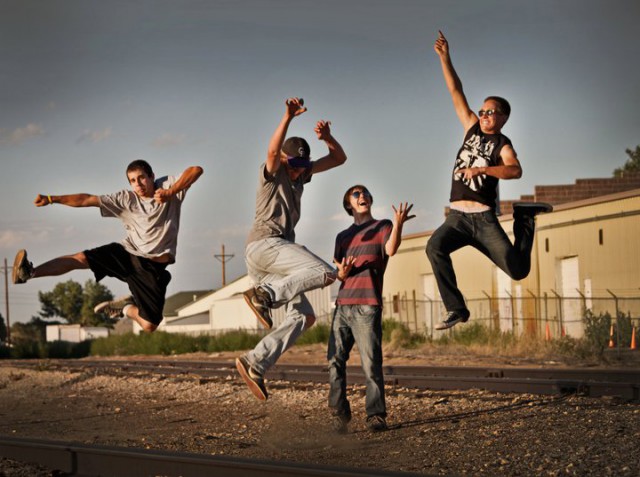 Balancing high school, extracurriculars and college prep is hard enough — until you throw in band practice, late shows and planning a tour. But somehow, the members of Hatrick Penry can do it all.

“I remember, we played a really late show last December during finals week,” says drummer Chris Roob. “And I had two finals the day after the show. I was really worried, but it turned out to be an excellent balance. I was able to play the show and remember all my studying — I got an A on both tests.”

Last week ska band Hatrick Penry surprised everyone and won the Best of Boulder pick for local band. Members Roob, Paul Schirmer (guitar), Drew Volz (saxophone and keyboard) and Ian Rosenstein (bass and trumpet) formed in the beginning of 2011, shortly after Roob and Schirmer left bands they were in. Roob says they were looking for a creative outlet, and he invited Schirmer over to jam that January. Over the next few months Rosenstein and Volz joined, and the band started playing shows in June.

Since last year, the band has been trying to establish a following in Denver. They’ve played The Gothic Theatre and Moe’s Original BBQ and opened for bands like Synthetic Elements and Igor & Red Elvises.

But playing music is the band’s night job. During the day most of Hatrick Penry’s band members attend Peak to Peak Charter School in Lafayette. Both Schirmer, 18, and Volz, 18, are seniors, and Roob, 17, is a junior. The only member not in high school is 20-year-old Rosenstein, who graduated with the other members’ older siblings. He works as a full-time karate sensei at United Studios of Self Defense.

Despite being musicians, the band still enjoys school and realizes its importance. Some members find music is even helpful to their studies.

“We all like school,” Volz says. “But because there is all that stress from doing well in school, I see the band as a creative outlet where I can throw my ideas out there and sort of relax after a long week.”

The band lists notable non-ska group Pink Floyd as well as genre mainstay Streetlight Manifesto as influences. Schirmer says the band takes the sounds of several genres and blends them into the up-tempo music it plays.

“We all take influences from rock and punk, and also classical influences and jazz influences, and we just shift it into a ska key,” he says. “Out of that comes a unique sound that’s still ska that people love.”

The boys have a loose style that involves a lot of improvisation. Schirmer, one of the band’s main lyricists, wrote the song “Model Rocket” on the spot.

The lyrics include, “Some people probably think that I’m a lunatic / Hiding downstairs with super glue and lightning sticks.” Schirmer says he’s a fan of funny songs that don’t make sense, and that his philosophy is to not take songwriting too seriously.

“Especially with ska music, you forget about all the rules for what songs have to be about and just write about anything,” says Rosenstein. “I wrote a song about a time-traveling raptor and a super hero who rides along with him.”

Hatrick Penry also splices their music with various sound bites from movies like Blazing Saddles and Stand by Me as well as cameos by Rosenstein’s 8-year-old brother.

Major changes are headed to the band as some of them go off to college. Schirmer is heading to the University of Colorado and plans to stay with the band. But Volz will be leaving the band as he heads to St. Olaf College in Minnesota in the fall.

As of now, they’ll spend the summer prepping for their tour, which will include cities like Grand Junction, Phoenix, Dallas, Tulsa and a stop in Kansas.

Roob has high hopes for the band. He says that he hopes Hatrick Penry will help ska become a more well-known genre.

“The thing with ska, being as young as we are, we’re playing this music that died so long ago, so I would love to be known for bringing it back,” Roob said. “I’d love to be on the cover of Rolling Stone as the coming back of ska.”