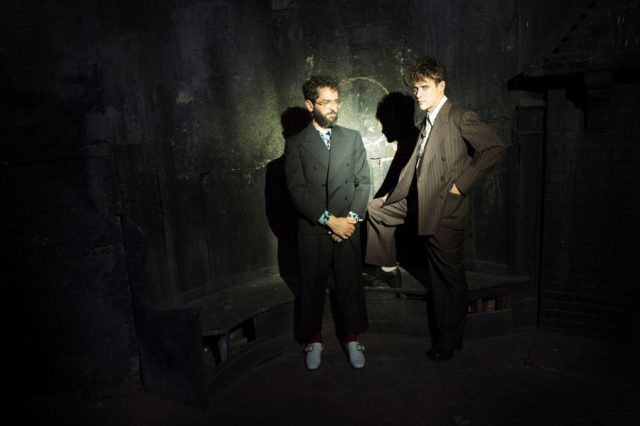 For a band that’s spent the last decade writing about the pitfalls of technology, the recent revelations about data harvesting aren’t all that shocking to the duo behind MGMT. Since their 2008 breakout album Oracle Spectacular, Andrew VanWyngarden and Ben Goldwasser have always used their music to explore what VanWyngarden calls, “the themes of death and paranoia about technology” with a little bit of dark humor thrown in.

“There’s always been this skepticism of technology or at least a skepticism of the notion that technology is going to bring us together in this raised-consciousness sort of way,” he says. “It’s being shown more and more that it does the opposite, and it isolates people, and it represses certain parts of the human brain.”

As children of the 1980s, the two grew up without the pervasive technology that exists today, and their playful synth-pop sound is reminiscent of the decade’s best pop music. But as most people who straddle the technological divide, they’ve had to wrestle with it, adapt to it and come to terms with how it affects our everyday lives.

VanWyngarden can easily walk us through the band’s relationship with technology, from the apocalyptic world void of computers VanWyngarden sings about on their first album, to angrily screaming “stab your Facebook” on the follow-up LP Congratulations. Then despair sets in on 2013’s self-titled album, as the duo explores “being hopelessly addicted to technology” despite all the warnings, including their own. Which brings us to the latest release, Little Dark Age, with its catchy ode to cell phones, “Tslamp.”

“I’m wondering where the hours went/As I’m losing consciousness/My sullen face is all aglow/Time spent looking at my phone,” VanWyngarden sings, with the slightest hint of irony in his voice.

“I think we got through the jungle and saw that there is hope,” VanWyngarden says. “That we can exist with technology and use it but it doesn’t have to be this thing that takes over our life.”

In some ways, technology may have even saved the band from its own demise.

Coming off the varied reviews of 2013’s experimental project MGMT, VanWyngarden and Goldwasser took some time off from music and each other. Goldwasser moved to sunny Los Angeles while VanWyngarden stayed behind in Queens. As their personal lives diverged on some levels, VanWyngarden says, he wasn’t sure they would be able to “recover creatively.”

But then came a new year and the two spent 2016 working on Little Dark Age across three time zones, mostly via email. From the first song, VanWyngarden says the “creative bond” the two share was apparent, and it became obvious the two still had something to say.

“Our newest album, even though it was created in the darker times of my life probably, in terms of the world totally collapsing, I think Ben and I reacted to that by wanting to be even more playful with the music and encourage dancing and fun in these times that could easily give rise to hopeless feelings,” VanWyngarden says.

It’s not dissimilar to some of the band’s earliest songs, written in the months following the attacks on 9/11. The two met as freshmen in college in Connecticut just a month before the twin towers fell, and wrote some of their earliest hits like “Kids” and “Electric Feel” in their dorm rooms.

“Soon after [9/11], we were writing these songs that became the foundation for our entire career and still sustain us,” VanWyngarden says. “There’s a parallel there of reacting to worldwide shocking events with wanting to make fun, poppy music.”

It doesn’t take long for us to get into the Cambridge Analytica controversy, how Facebook and other social networks profit from data harvesting and Adam Curtis’s three-hour 2016 documentary HyperNormalisation, which VanWyngarden admits he can’t help but recommend to almost everyone he talks to. The film pulls together archival footage to document how the Western world ended up in a state of mass delusion, as the social and political world crumbled around them.

“He said it was very clear Donald Trump would be president because these sort of echo chambers and mirrors that were existing, and there’s this illusion that you’re communicating on a mass level when you’re really not,” VanWyngarden says, trailing off, realizing he isn’t saying anything we haven’t heard before.

And that’s exactly what MGMT plans to do. As the duo heads out on tour with the latest album, they’ll play songs from across their catalogue, and VanWyngarden says, “I think our live show is the best it’s ever been.”

There’s only one request: Turn off your phone and dance.