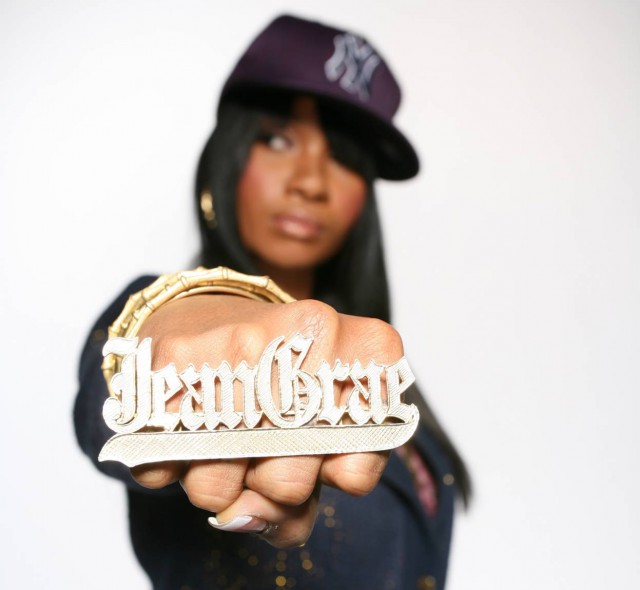 “[Femcee] is a stupid word. It’s not even a real word,” she says. “I think it’s a lot easier to say that and just put it in a box. It’s easier to put people in categories because you don’t actually have to think about anything or use your own mind or decide what it is on your own. It’s like, we get it! You can see my boobs, they’re right here, we get it!”

Because of her gender, Jean Grae is often grouped in with other female rappers like Nicki Minaj, Lil’ Kim and Lauryn Hill, instead of being categorized by her skills on the mic. She’s stylistically closer to artists like Pharoahe Monch, Lupe Fiasco and Talib Kweli. Her clever, meticulous and witty lyrics combined with her rapid-fire flow have listeners constantly rewinding to catch bars like “They call me Jean McCoy, beast in thee employ / Deploy deplorable, through audible destructive actions, attractive decoy / Then pass it to Troy, after I’m passing your life over / He’ll deliver it through river Styx, Hades / I’m cold, deliberate, ladies, my foes limited,” from the song “Assassins.”

Grae’s buzz started in the mid- and late-’90s as part of the New York-based group Natural Resource. Under the moniker What? What?, she consistently outshined her fellow group members. So when the group disbanded in 1998, she should have been an obvious pick-up for any major label, right?

“Everybody hated me,” she says now. “Seriously. One of the interesting things that I ever heard when my group Natural Resource split up, the immediate reaction from everyone was, ‘Oh man, it’s going to be so easy for you to get signed, your stuff is going to be everywhere.’ And I was like, ‘Yeah!’ Then I was like, ‘Oh, let me get out of my bubble of the world. No, it is not!’ What it’s relegated to is, ‘Oh, female emcee,’ so that’s not the entire story, and it’s a lot more difficult.”

Grae released her debut album, Attack of the Attacking Things, in 2002 on small indie label Third Earth Music. She dropped an EP, Bootleg of the Bootleg EP and a sophomore album, This Week, with then-up-and-coming indie hip-hop label babygrande music in 2003 and 2004, respectively. In what was essentially a “one-off ” deal with babygrande, according to Grae, the label released another album, Jean Grae: Evil Genius but under the name of the production team, Blue Sky Blue Death. She’s not supposed to talk about the situation, but admits she was just as surprised as her fans when the album dropped a few years ago.

Grae signed with Blacksmith Records in 2005, the label launched by rapper Talib Kweli, and dropped a few previously unreleased projects, including her album with producer 9th Wonder, called Jeanius, and a collection of rare, unreleased and collaborative songs called The Orchestral Files. She also gave away a mixtape earlier this year, Cookies or Coma, which is already being touted as one of the top mixtapes of the year. With all the Jean Grae music that’s out there, she still hasn’t officially released a third album. She’s currently working on it — it’s titled Cake or Death — but she won’t announce a release date.

“I think the idea is when it’s right, when everything sounds like what it’s really supposed to sound like instead of rushing to get everything out, then it’ll come out,” she says. “It’s really heavy on the music side of things, and by that I mean tons of vocal arrangements, string arrangements and horn arrangements. It’s not a very typical rap kind of album. And I think it’s OK to take the time to make it coalesce instead of rushing to put something out. Because there’s gonna be 82 albums that come out that sound exactly like it … no, not really. But you guys can wait.”

That’s the other thing about Jean Grae — the sarcasm runs deep. When asked if she would reveal any guests or producers that may end up on the album, she refuses.

“Um, no. With today, on the account of the earthquake, I’m not going to,” she says referring to the East Coast earthquake that occurred on Aug. 23. “But they’re all very talented people … and Yanni. Yes, Yanni is also on it. No. But if I did have a contact for Yanni, I am the person who will put people on songs just for the sheer entertainment value of it and say it’s featuring Yanni because that would be awesome. But, no, he’s not on it, I’m doing false promotion, and I don’t want Yanni to sue me. Because even though he’s not very popular in the rest of the music business, I’m pretty sure he’s rich. Yanni has to be pretty paid. What does he play? The panflute?”

No one knows Grae’s sarcasm more than her Twitter followers (www.twitter.com/jeangreasy). She has close to 50,000 followers and continually has loads of fun at the expense of some of her not-too-bright followers. She started a hashtag trend called #TheFuture where she “wishes” for things that currently exist and plays like she doesn’t understand when a few of the followers try to explain. Once she announced she was sick of wearing glasses and wished there was something she could put on her eyeballs so she could see without glasses. Another time she pretended not to know what downloading, MP3s or iPods were and delighted in frustrating people trying to explain them to her, not knowing she was playing them the whole time.

“It’s wonderful, sometimes, and it’s also sad,” she says. “There was a day where I was like, ‘OK, how do I count bars [of music]?’ and people actually responded! So I was like, let’s see how far I can take this. So I asked, ‘What is 82 plus 3?’ You guys are really telling me? You don’t think I know how to add three to a number? Then I was like, what two colors make purple? Really? You guys think I’m a fucking idiot? But sometimes it’s really funny. There was another, I asked ‘How do I tweet to everybody so that you guys see the message?’ I guess there’s something masochistic about it. Or sometimes I need to be reminded that not everybody is as bright as the people I’ve chosen to be around.”

Now on tour, Grae is taking the razor-sharp rhymes and her comedic sensibilities on the road. And even though it’s just her and former Company Flow DJ Mr. Len, she guarantees that the show will be a good one. Or does she?

“It’s gonna suck. It’s gonna be awful,” she says. “But it’s just me and Mr. Len and a lot of rap words. And a lot of jokes and fuckery. We kind of play it by ear and play by the crowd. We’ve known each other for a very long time, and it’s nice to have someone on stage with you that knows like, ‘OK, let’s do this now … or maybe not. I’m gonna lay down. Or I’m gonna walk off stage.’ I don’t know what’s gonna happen. There may be a lesbian threesome! Who knows! But I am doing a lot of Cookies and Comas stuff and then previewing Cake or Death.”