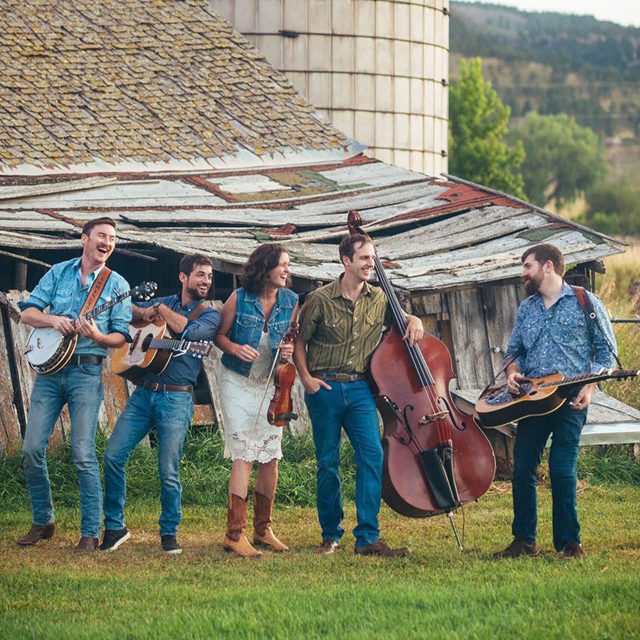 Dobroist Justin Konrad describes standing onstage at the 2019 Telluride Bluegrass Festival for the first time as a “surreal experience.” Boulder’s Bowregard had entered the prestigious band contest at the very last minute. They gathered around a single microphone and unleashed haunting harmonies, sparkling instrumental breaks and an urgent and propulsive rhythmic drive.

“We just wanted to be finalists and get to play on that stage,” Konrad says. “I thought maybe we’d get second place, but then they announced that we won. It was one of those moments in your life you know you’ll count down on your death bed as one of the greatest.”

Past contest winners, like the Dixie Chicks, Greensky Bluegrass, The Hillbenders and Trout Steak Revival, have used the win as a launch pad. The members of Bowregard were thrilled, but there was one little catch, Konrad says.

“This is really a baby band. We had only officially been a band for a few months,” he says. “We were still figuring things out like how to move together onstage doing harmonies.”

That June evening at midnight, Bowregard — pronounced like “bow that fiddle” — played in the Town Park campground. “We thought it was just going to be some picking, but a couple hundred people showed up,” Konrad says.

The band formed around guitarist and lead vocalist Max Kabat and banjo player James Armington. Kabat has written the majority of the songs so far. “He’s got a great voice that connects with audiences,” Konrad says.

Armington plays both Scruggs-style bluegrass and traditional clawhammer banjo. “James is a bundle of energy onstage, and he’s in demand as a player, especially, for his clawhammer work,” Konrad says.

Bowregard jelled when fiddler Colleen Heine and bassist Zachary Smith arrived from Savannah, Georgia. “They provided us with these instant perfect harmonies,” he says. “It’s a good mix. Me and Max are into Tony Rice, Punch Brothers and Strength in Numbers. James and Colleen are deep into the old-timey world and they do square dances.”

But Bowregard isn’t your typical jamgrass Boulder band. “There really aren’t that many working traditional-leaning bluegrass bands in the area,” Konrad says.

“The biggest thing that sets us apart is energy. We are really dynamic onstage. I can tell when things are jelling because we’re moving and careening off one another musically. The crowd feeds off that, and we feed off them,” he says.

Konrad has traveled a highly unlikely path toward twangy success on the Dobro (or resophonic slide guitar), an instrument he’s only been playing for eight years. He took home top honors in the Rockygrass 2016 Dobro contest. Konrad’s Dobro heroes start with Jerry Douglas and include Rob Ickes, Mike Witcher, Andy Hall (of Infamous String Dusters) and his longtime teacher, Lyons-based Sally Van Meter.

“I’m working to forget the technical stuff I know and just play. I want to sound like myself,” Konrad says.

In his other life, the Harvard graduate is an attorney with a Boulder law firm concentrating on intellectual property rights. He clerked at the U.S. Court of Appeals 10th Circuit, but before becoming a lawyer, Konrad had a separate successful career as a recording engineer, producer and professional guitarist.

That background is coming in handy in November as the young Bowregard band heads into the studio at Boulder’s eTown. Bowregard is working up original songs and new instrumentals featuring the band’s distinctive, percolating dance floor drive. Producing some of the cuts so far is Nick Forster, a member of the neo-traditional Hot Rize, the first Boulder bluegrass band to develop a national following.

“We respect bluegrass, but we don’t want to be replicating old music. Bluegrass doesn’t stand still and is always evolving,” Konrad says.

“We like to reimagine songs the audience might be familiar with. We took Ola Belle Reed’s ‘High on a Mountain Top,’ which Hot Rize did, and reharmonized the song in a completely new way,” he says.

Bowregard will be testing out their new material at the band’s biggest show so far Nov. 15 at the Fox Theatre. “We didn’t want to do it by ourselves so we’re co-billed with the Charlie Rose Band (from Elephant Revival),” Konrad says.

Following the release of Bowregard’s first full-length album early in 2020, the band will play Feb. 15 at Denver’s Midwinter Bluegrass Festival and on Feb. 22 at Winter Wondergrass in Steamboat Springs with Greensky Bluegrass, Billy Strings and the Travelin’ McCourys.

But the big date circled in everyone’s calendar is June 19. That’s when Bowregard takes the main stage at the Telluride Bluegrass Festival as a bona fide big deal, performing an entire set of their own music.

“Last year vaulted us into everyone’s awareness. This time when we show up, we’ll be a little more seasoned,” Konrad says. He adds that the band members are not quitting their day jobs just yet.