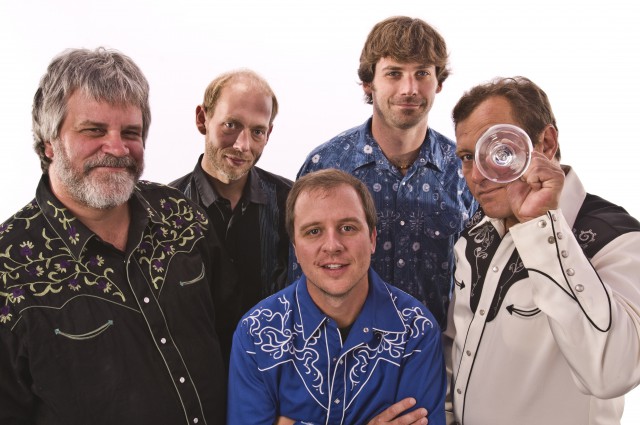 To hear Vince Herman tell it, Great American Taxi’s second CD, that ever-dreaded sophomore effort thing, found itself looped out in the exhausted vagaries of a dysfunctional post-millennial record business. Just when people are getting back into actually making records, no one can figure out to sell them.

But Reckless Habits, the Americana band’s follow-up to the much lauded Streets of Gold from a few years back, finally lumbers its way across the line on March 2. All four doors intact — a label, cover art, a clutch of songs, a little hay in the wheel wells.

“Yeah,” sighed Herman, “it took quite a while.

“The record business is changing so quickly that nobody really seems to have much of a sense of what it’s doing. It took quite a while to find something to do with the record other than just opening up the trunk and going, ‘Hey … anybody want one?’

“The landscape’s changing so quickly, it’s kinda peculiar. But we found an arrangement that works for us, and we got a team of people together … management, publicists, the whole thing.”

Herman and keyboardist/partner Chad Staehly hosted a series of well-attended recording sessions up at Loveland’s Backbone Studio last January, complete with friends like Matt Flinner, slide player Barry Sless, the Peak to Freak Horns and the Black Swan singers for background swoon. Sounds chaotic, and crowded, but Herman had nothing but praise for the facility and noted that the band actually got plenty of what they probably lacked the first time around — time, and focus.

“That studio up there is really a great new facility. Three-bedroom apartment upstairs, we were able to lock ourselves in for ten days … kinda camp out, cook, eat, play. Rinse, lather, repeat.
“We had a lot more time … to do kinda what we had imagined the songs to be. And maybe a little more budget and a studio that was willing to help us out. And, the right atmosphere to really be able to focus in on it. It really helps to be able to stay at the studio. Y’know, at the end of the day, you cook up a big meal and talk over what you did that day and what you’re going to do tomorrow, work out some stuff and go in the next day prepared.”

From the opening daydream fantasy of “One Of These Days,” channeling a Little Feat-on-the-bayou vibe, to deep fried rockers like “Tough Job” and “Good Night To Boogie”, the pedal-laced prairie ballad “New Madrid,” which sounds like it could have been sung by Richard Manual, the jamgrass workout “Unpromised Land” and the Gramful Deadish title track, Taxi moves confidently between touching base on their first generation influences and building songs with unmistakably individual presence. Hints of legacy Salmongrass humor run through the proceedings (“Fuzzy Little Hippie Girl,” indeed), and the addition of a slightly unhinged read of Monroe’s “Big Sandy River” pay respectable homage to the band’s pedigree … but overall it struck us as a band performance of a songwriter’s record; everything has an arrangement, a beginning and a middle and an end. Maybe it’s that “focus” thing Herman talked about, but everything sounds finished, even the stuff that sounds like it could go on for weeks.

Or maybe it was Tim Carbone, longtime friend/Railroad Earth bassist, who sat in behind the big board as producer.

“One of the best things he did was kept us on target time wise as far as completing all the tracks on time, and getting the overdubs and the horns and the singers in there … kinda as a project manager. Kinda warned us when we were up against time constraints, ‘cause you always have to make choices. But he also added a critical ear and some arrangement ideas. He’s just real good at listening to takes and had a real good sense of the aesthetic we were going for.”

Herman admits that, since most of these tunes had enjoyed a happy and restraint-free minor lifetime on the road before they went in to record them, some of the jamming and on-the-fly staging had to be reined in a bit. We wondered which tune gave them the most challenge behind the glass, and weren’t particularly surprised at which one it was.

“Probably the instrumental ‘Big Sandy River.’ We wanted to do it at a pretty hardy clip, to have a bluegrass clip on the record. Just playin’ it and getting it tight at that pace. For me,” Herman laughs a bit, “I’m kind of a sloppy guitar player. When you make a record, it’s kind of a permanent artifact … the mirror of embarrassment is held right up to you.”

Not that he could have peeled off those licks any better 12 years ago.

“Nah, I dunno. I’ve always had kind the same approach to it. Kind of approximate it, y’know? But you’re the studio, I guess it’s getting a little more exacting. The first record, most of the lyrics I sang were in jibberish, so I had to come up with words this time.”

Taxi is also in the midst of a series of dates with Todd Snider as his backup band — a marriage most agree was forged in some sticky floor, $2 cover heaven for alt-indie songwriters and Americana bands.

“The shows are goin’ great. The last trip we did was down to Texas. Got a new favorite venue, the Gruene Hall in New Braunfels, Texas. Wow. Oldest dance hall in Texas. What a great, great feeling venue. Yeah, people just eat him up down there.”

We caught a Toddhead reviewer out on the net plainly, if not quite bitterly, disappointed that the band didn’t delve further into Snider’s latest CD, the frayed masterpiece The Excitement Plan.

“Ah, I was actually making the set list for most of those dates,” he laughed. “We’ve learned pretty much all his material at this point. That night … the sets were really strung together a bit more topically, than what record he wants to play from. I mean, he doesn’t have a self-promoting bone in his body. He really could give a shit about all that kinda stuff — if the guy felt it was unusual that he wasn’t playing songs from the new record, he doesn’t know Todd real well.”

But for Taxi, Herman sounds relieved and jazzed. The band has finally cranked out the record they’ve wanted to make all along. They have people behind it; festivals and travels and long nights of pickin’ madness await … and then Herman hits “that word” again.

“We’re really fired up. We’ve got new management … been good working with them, and with Crescendo here in Boulder, and a label, and publicists, and radio people and press people. All those things you kinda gotta build into a machine.”

Some of us have been around long enough to remember when Herman wanted out of the machine. Couldn’t resist a gentle reminder.

“Yeah, there I go again. Well, I guess you get to a point where you realize that … this is what you do.”