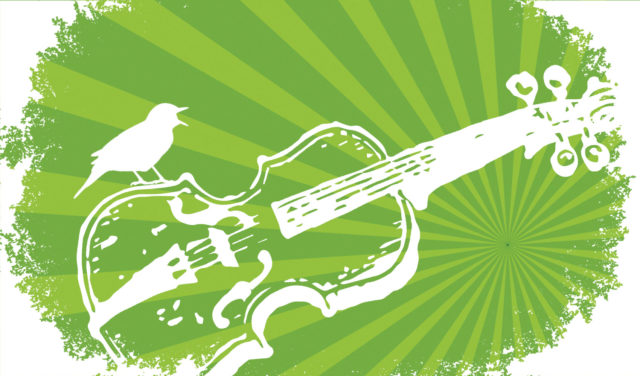 We’ve always thought of RockyGrass as our local festival. Boulder County residents take it for granted that the world’s best bluegrass musicians will migrate here every summer for the always sold-out event.

Mention RockyGrass to bluegrass fans and musicians across the U.S. (and the world) and they smile. They revere the little festival in Lyons as one of the premiere bluegrass events in existence.

According to two of the genre’s most recognized pickers, Pete Wernick of Hot Rize and Chris Thile of Punch Brothers, RockyGrass has been essential to their careers. Their celebrated bands might not have been formed without RockyGrass, originally known as the Rocky Mountain Bluegrass Festival.

Bill Monroe Started It All

We can thank the father of bluegrass music for also parenting Colorado’s first bluegrass festival.

In 1972, members of Denver’s small, growing bluegrass scene formed the Colorado Bluegrass Music Society. When they met Monroe after a show at Tulagi’s in Boulder, he convinced them to put on a Colorado festival in 1973 at the Adams County Fairgrounds. He even footed the bill for the first event and booked the all-star lineup featuring his Bluegrass Boys plus Lester Flatt, Ralph Stanley, Jim & Jesse, the Bluegrass Alliance and Country Gazette. Monroe would oversee three more of the gatherings.

“In the early years, the festival was at a dusty rodeo ground,” Pete Wernick says. “There were a few trees in the camping area. Certainly, no beer was served. The wind would come up sometimes. One time it blew Jim and Jesse McReynolds’ hair out of shape so it stood straight up.”

The festival eventually moved to Loveland before the promoters of the Telluride Bluegrass Festival took over the event in 1992, moved it to its current Planet Bluegrass location, and rechristened it “RockyGrass.”

At the age of 76, Wernick—known as Dr. Banjo—suffered a heart attack in February. He has recovered and is preparing for a rare festival finale set July 31 with Boulder-born Hot Rize, including Tim O’Brien, Nick Forster and Bryan Sutton.

“This is special. There’s no telling when we’ll play again. Hot Rize doesn’t have any other shows scheduled,” Wernick says.

The Rocky Mountain Bluegrass Festival was essential to his musical future.

“I met Tim O’Brien at RockyGrass the first time I played there with Country Cooking in the third year,” the banjoist says. “He won the fiddle contest. (Late guitarist) Charles Sawtelle was the soundman for the festival. Hot Rize debuted in 1978 and eventually became RockyGrass’ host band.

“The festival changed everything for bluegrass in Colorado,” Wernick says. “Right away we had Bill Monroe coming to Colorado, all the major acts in bluegrass came and the best local bands, too.” He also credits bluegrass radio shows on KGNU and KCFR with building the devoted following for the music. (Boulder’s KGNU will broadcast and livestream RockyGrass again this year.)

“There’s a lot more to bluegrass than playing the hits. It’s a subculture of musicians,” Wernick says. “You didn’t see Placido Domingo singing in the parking lot at an opera festival.

“RockyGrass was the one place devoted to bluegrass and almost everybody camped, so there was lots of mingling,” he adds. “That was the first place I jammed with my heroes like Byron Berline and later with Drew Emmitt (of Leftover Salmon) in the campground.”

Putting the Punch in the Brothers

Chris Thile, the mandolinist, singer and leader of the Punch Brothers band, came to RockyGrass as a teenager with his first band, Nickel Creek.

“RockyGrass was the first national festival to hire Nickel Creek,” Thile says. “I was maybe 16 and my whole family drove to Lyons from Kentucky. I remember being backstage and meeting (bassist) Edgar Meyer, one of my heroes. He kindly talked to me about classical music and he’s become one of my biggest mentors.”

It all came around a few years later when Chris Thile was greeting fans in the merchandise tent.

“This 12-year-old girl came up to get an autograph,” he says. “It was Sarah Jarosz and she said she hoped we could play together some day. You hear that a lot. A few years later we were onstage at RockyGrass jamming together.” Jarosz has gone on to national acclaim and Grammy awards.

“That’s the kind of place RockyGrass is,” Thile says. “When you’re there, because it’s so intimate, you’re more open to new musical connections being made.”

The robust picking scene backstage and in the campgrounds at RockyGrass was also vital.

“The first time I met and played with Noam Pikelny and Chris Ethridge (of the Punch Brothers) was at RockyGrass. I also met my ex-wife there,” he says with a sigh.

The Punch Brothers perform July 29 at the festival. “We never say no to Rockygrass. The place is an acoustic anomaly. The cliff behind the creek makes it sound unlike any other place, almost amphitheater-like,” Thile says, adding that the presence of so many musicians in the audience drives bands to deliver stellar sets.

Other highlights are a reunion of Uncle Earl and the debut of a new Colorado band, Big Richard. Both bands are composed of women musicians.

According to Pete Wernick, also a nationally known bluegrass educator, the music is in good hands for the future with a bevy of young, talented stars like Sierra Hull, Molly Tuttle and Billy Strings rising to the fore.

“Bluegrass started 75 years ago and it’s invulnerable to fads,” Wernick says. “There’s no place for posing. In bluegrass, if you have the talent and the soul, that’s good enough. There’s not much left in our culture that is still like that.”

There is no doubt that if more tickets were available—or if another day was added, RockyGrass would still sell out. The fact that the festival is forced to stay small because of the location is a huge “gift,” Thile says: “Since RockyGrass can’t get any bigger, it only gets better.”

John Lehndorff has written about bluegrass music in Colorado since the late 1970s for diverse publications including Bluegrass Unlimited.