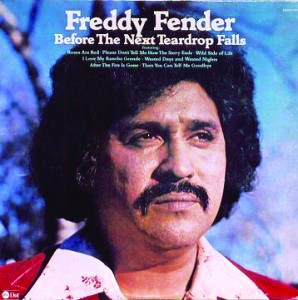 Documenting Charley Crockett’s influences is like a history lesson in mid-20th century music. From the pioneer of electric blues to swamp pop to one of the precursors of hip-hop, Crockett digs deep into the American catalogue to find his own kind of country. Listen to the full playlist on Boulder Weekly’s Spotify.

Rooted in traditional South Texas Tejano and conjunto, while blending blues, rock ‘n’ roll and country, Fender is somewhat of a hometown hero for Crockett. Also from San Benito, Fender became a national star with the re-release of this single in 1975, which Crockett covered on his second record, In the Night. “I found my voice singing my kind of country music, just like Freddy Fender did,” Crockett recently wrote in Texas Monthly.

Combining traditional Cajun folk, black Creole zydeco, honky-tonk country and New Orleans R&B, “swamp pop” originated in the Acadiana region of southern Louisiana. The sound quickly traveled into southeastern Texas in its heyday in the 1950s and ’60s, with regional hits like this one from Johnnie Allan — a midtempo lovelorn ballad with a steady drumbeat, rocking piano melody and bluesy horns.

When Crockett discovered T-Bone Walker’s music on the streets of New York City, it was revelation. “I realized there was this Dallas blues sound I had naturally been finding, and it seemed like the farther from home I got the more I was finding that sound,” he told Garden & Gun in 2019. Also from rural Texas, T-Bone Walker made a name for himself in the early blues scene as an innovator of electric guitar. His agile guitar riffs are prominently featured in this single from 1948.

Also while living in New York (performing with spoken word and rap group Train Robbers on the subway) Crockett was introduced to Abiodune Oyewole, who got his start with The Last Poets, an amalgamation of poets and musicians that arose out of the black nationalist movement of the 1960s and are seen as early influencers of modern hip-hop. By the time Crockett began going to his house for Sunday night dinners in Harlem, Oyewole was a Columbia professor and his philosophy left a lasting impression on the country singer. “He said that all his poetry had come as resolution to the conflict,” Crockett says. “He was the first place that anybody had ever vocalized that, in a way that resonated with me. And I immediately realized that I was coming from that place too and writing in that way.”

“Stop the World and Let Me off,” Waylon Jennings

“Everybody loves to praise the old school sound, but they really know nothing about it,” Crockett says, particularly the careers of pioneering outlaw country stars, like fellow Texan Waylon Jennings. Popularized in the 1970s, outlaw country originated to combat the commercial grasps of Nashville’s over-produced and polished country persona. Jennings came to define the subgenre, with his gritty country soul, but its the hard work he put in during the preceding decade that most inspires Crockett, typified by this 1966 single.