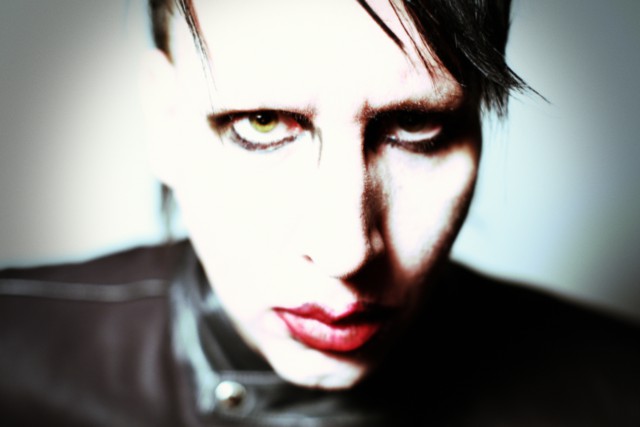 Marilyn Manson doesn’t want to be shocking. In fact, he says that’s impossible.

Attention is what Manson aims to get when he hits the concert stage, and entertainment is what he aims to deliver.

“I guarantee what’s coming your way is going to be enjoyable,” Manson says. “If someone was to see it for if for the first time, they should know I’m enjoying it to the point where I can say it won’t be anything less, at the very worst, than the best thing happening today in rock ’n’ roll. That might not be saying much today. That’s why I wanted to be a rock star. I was disgusted as a journalist that there wasn’t anything happening.”

Manson was a journalist back when he was still known as Brian Warner, a kid from Ohio who moved to Florida to go to art school.

Among others, he met the Red Hot Chili Peppers and Sex Pistols manager and impresario Malcolm McLaren. Then came grunge — “I called it communist rock. Everything sounded the same,” Manson says.

So Warner put together a band called Marilyn Manson & The Spooky Kids. But his inspiration was as much from art as music.

“I would say that’s more where I started,” says Manson, who is an active, exhibiting painter. “I made a drawing and printed it at Kinko’s and passed out flyers for my first show. I hadn’t written a song at that point. And the show was sold out. I would be too simple to say I’m just a musician. Dali is my hero. Not that I want to make his paintings. He’s my role model when it comes to art.”

That was in 1989. In 1993, Marilyn Manson was discovered by Trent Reznor of Nine Inch Nails, who produced Portrait of an American Family, the band’s 1994 debut, and released it on his Nothing Records.

With his reputation and popularity growing quickly, Manson had a hit with his cover of the Eurythmics’ “Sweet Dreams (Are Made of This).” Then had a smash with 1996’s Antichrist Superstar, in the process becoming the rock star that parents hated.

Three years later, however, Manson became entangled in controversy, blamed by some for inspiring the two killers who murdered 12 students and a teacher at Columbine High School in Littleton.

With Born Villain, his latest album, Manson has come back — even though he laughed off the notion of critics and fans that he’d made one of the best records of his career with Born Villain.

“How dare they?” he says, laughing, then pauses. “Let me give you a serious answer. It really took saying to myself, which isn’t easy for anyone, that I needed to make a comeback.”

By that Manson doesn’t mean a return to his commercial peak. He needed to come back as an artist.

“I lost interest,” he says. “That was the problem. The edge comes with the desire. I’m like a knife. You’re either a butcher knife or a butter knife. It takes longer to cut off your dick with a butter knife. That’s what I was. I don’t know where that metaphor came from but I’m sticking with it.”

Dissatisfied with his life and record label — “I felt I wasn’t able to live up to what I am supposed to be” — Manson decided he was depressed.

“The only way you can get out of it is to put your [bleeping] boots on, stand up and start kicking your own ass,” he says.

So he “let everything go,” putting all his trappings of fame into storage and moving into a spare, warehouse-style Los Angeles space with a pared-down inventory.

“It was the first time I’d lived alone,” Manson says. “I went from high school to here. I was living with my parents in high school. Then with [guitarist] Twiggy [Ramirez], then on tour. I had three long-term relationships. I always had somebody living with me. I found it very liberating to do simple tasks, like walk down the street and buy a sandwich. [It wasn’t that] I was spoiled. I’d never had a chance to do it.”

Manson started going out and met people — a lot of actors, directors and Hollywood types.

“There were no expectations,” he says. “They knew I wrote the song ‘Beautiful People.’ They’d heard about the 36 or more school shooting victims that I’d been blamed for, even though I had nothing to do with it. They knew about my dick getting me in trouble. We became friends like regular people, which is unusual in Hollywood, where you usually lead with your resume.”

Soon he brought them back to his place. “I created sort of a factory, like Andy Warhol — and began recording there, with people, mostly girls, watching.”

“It would be like reading a book report naked in front of the class,” he says. “It wasn’t embarrassing. It made me do more what I do live.”

Those sessions brought Manson back to his roots. “I was sitting in a shitty apartment in Boca Raton, Fla., and had to do this,” he says. “I suddenly found the same inspiration. … I wanted to make music for the reason anyone would write a song in the first place. You want to communicate with the person in front of you. You want to impress a girl.”

The result impressed critics, fans and even Manson himself.

“I wouldn’t say it’s a fun record,” he says. “I don’t know how people respond to it. But it seems like a strong record to me. This is what I’m good at. This is what I do best.”